University building projects to be mothballed as funding is slashed 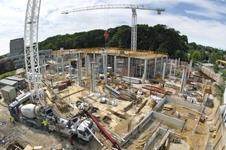 Hefce, which handles university funding in England for the government, has told institutions how much they will receive next year from a fund of £7.3bn - £449m less than the sector had been expecting.

The slash in funding will result in many building projects being mothballed.

The cuts are the first since Labour came to power. The winners included institutions with the highest quality of research, such as Oxford and Cambridge. But reports suggest that once inflation has been taken into account in addition to amounts given to teaching, which comprises the largest chunk of the total allocation for England, Cambridge will see a real terms cut of 1.9% and Oxford of 1%.

This is understood to be explained by Hefce’s decision to reduce the amount allocated for historic old buildings.

Universities in Wales will be told about their future funding on Tuesday, and in Scotland universities have been told they will receive an extra £40m but cuts are expected to follow the next budget.

Sally Hunt, general secretary of the University and College Union, told the BBC: “The consequences of the cuts will be building projects on hold, class sizes growing where jobs are lost, thousands of students denied access to university and staff following them to the dole queue.”