Vinci has been named preferred bidder for a £100m contract to build the second building in the first phase of University College London’s new Stratford campus.

The firm will be responsible for the construction of Pool Street West (pictured), which has been designed by Lifschutz Davidson Sandilands. 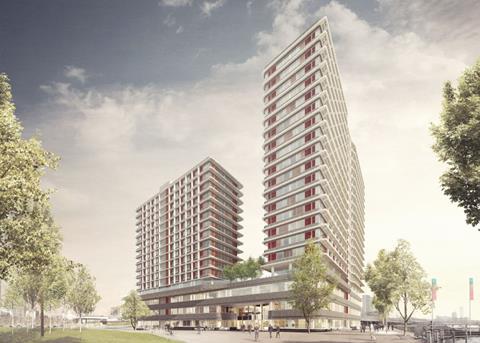 The job includes the construction of 524 student residential units that are spread across two towers, of 16 and 20 floors respectively, set above almost 5,500m2 of academic space and research labs.

Vinci beat two other firms to the contract, believed to be  Bouygues and ISG, to build Pool Street West, which will be located at the Queen Elizabeth Olympic Park — near the Zaha Hadid-designed aquatics centre.

Vinci’s appointment comes almost seven months after Mace was appointed to construct the first building on the new campus, Marshgate I.

Mace beat Laing O’Rourke to the £200m contract to build the Stanton Williams-designed scheme, which will provide 35,000m2 of research, innovation and teaching space.

Building revealed that the pair were the final two firms left in the running last August, when it became clear the Mace and Laing O’Rourke had beat out three other big name firms along the way. Lendlease, Sir Robert McAlpine and Bouygues were originally also shortlisted for the job.

The appointment comes as detailed designs for the first phase of the new campus look set to be approved by the London Legacy Development Corporation (LLDC).

Papers published ahead of the next meeting of the LLDC’s planning committee, scheduled for 26 March, recommend consent is granted to both Pool Street West and Marshgate I.