A judge’s decision to rule that a council broke the law by not holding a competition into a scheme to redevelop Winchester city centre has claimed the scalp of council leader Robert Humby.

Judge Dame Beverley Lang blasted Winchester city council for committing a serious breach of the procurement rules when it appointed Henderson to develop the 3ha Silver Hill site on renegotiated terms, including dropping the affordable housing element and increasing the number of shops.

Allies & Morrison has been appointed to work on the £165 million scheme but this has been thrown into doubt after communities secretary Eric Pickles stepped in – following the judge’s ruling – to freeze the decision to give it planning made at the end of last year.

Now council leader Robert Humby has resigned in the wake of last week’s verdict by the judge.

In a statement, he said: “I stand by the decisions I and the cabinet made on Silver Hill. They were taken after consulting with officers and taking external legal advice.

“I think it is also important to remember that the majority of decisions on Silver Hill were taken long before I was leader. Nevertheless, I was leader when the court decision was handed down and so must take responsibility for that judgement.”

His departure came 24 hours after the chair of the council’s overview and scrutiny committee quit over the issue as well. 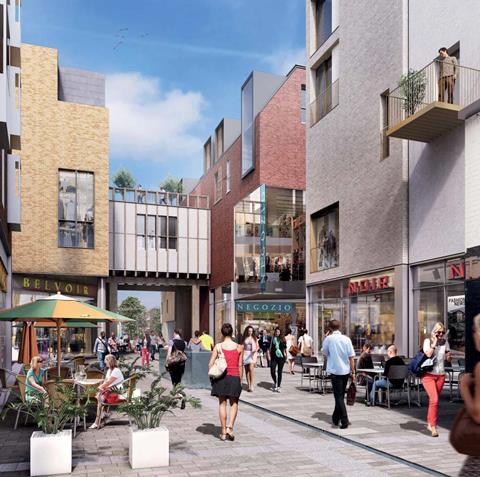 A local councillor has called parts of the scheme ‘truly awful’

Kim Gottlieb, the councillor and campaigner who led the call for the judicial review into the procurement process which resulted in judge Lang’s decision, said: “The problem they both faced is that, in respect of Silver Hill and, probably, other major projects, they had to rely heavily on advice they received from senior officers which simply wasn’t good enough, and sometimes misleading.”

Gottlieb has previously said Allies & Morrison’s proposals do not do Winchester justice. Before the council took the decision to give it planning, he told fellow councillors: “The only reason this scheme has got as far as it has is because so very little of the actual architecture has been clearly revealed.”

He commissioned a sheaf of CGIs that he claimed depicted the scheme more accurately than the architect’s renders and said parts of the scheme were “truly awful”. He added: “Some of these buildings do not belong on an industrial site let alone the centre of the ancient capital and ‘birthplace’ of England.”

The case has a complex history dating back more than a decade when Thornfield was appointed as developer. Henderson bought the firm when it went bust and took on its interests at Winchester and at Smithfield Market in the City of London.

Last year, the council agreed to make a number of changes to the contract including dropping requirements for a bus station and 35% affordable housing after Henderson argued the scheme was not viable.

The judge said the changes were sufficiently “radical” that the whole agreement should have been put back out to competitive tender.

Last November, local architects took to the streets to join a protest march through the city, arguing that such a large scheme should not be designed by a single practice. Allies & Morrison won the masterplan and design of individual buildings in 2003.

Pickles has now applied for an Article 25 holding direction while he decides whether to call in the application.

A council spokesman said it has been notified by the department for communities and local government that it had received requests to call in the application. But he added: “The council considers that there are no grounds upon which the application should be called in.”

Last year Pickles rejected Henderson’s scheme at Smithfield which had been drawn up by John McAslan.