Plans for a £500m new life sciences district in Oxford have taken a leap forward after the successful conclusion of discussions on the project’s £8m Section 106 Agreement.

Outline planning consent has been granted for the scheme’s masterplan, which is set to see nearly 90,000sq m of new laboratories and workspaces for biomedical science built for Thomas White Oxford, the development company of Oxford University’s St John’s College. 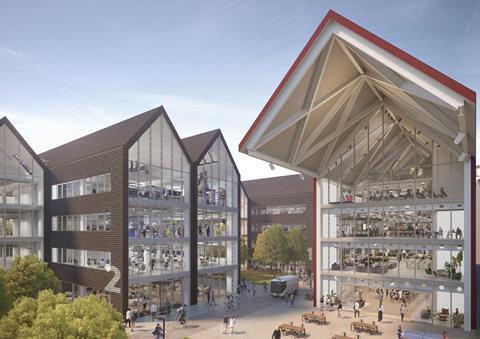 The Red Hall, a workspace for start-ups, entrepreneurs and freelancers, has already been granted detailed planning approval

Work will also involve improvements to the nearby A40 and A44.

Detailed planning approval has already been granted for the first phase of the scheme, which is set to provide more than 13,000sq m of new laboratories and office space in three buildings.

Included in this part of the scheme is The Red Hall, a workspace for start-ups, entrepreneurs and freelancers with capacity for 300 workers and two connected laboratory and workspace buildings totalling more than 5,000sq m over four floors.

Charles Rowton-Lee, the head of commercial at Savills Oxford, which is also working on the scheme, said the success of the Oxford AstraZeneca vaccine had helped to drive demand for laboratories and office space in the city as firms scramble to be associated with the high level of academia in the region.