Firm will work with architect David Adjaye on the project

WSP has been added to the team chosen to design the National Holocaust Memorial by the Palace of Westminster, Building has learned.

The engineer will work with architect David Adjaye on the project to be built in Victoria Tower Gardens in Parliament’s shadow.

The government has pledged to cover the cost of the new memorial which the UK Holocaust Memorial Foundation has estimated will have a total project value of £50m. 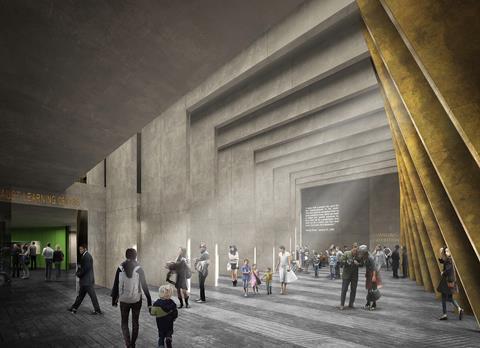 How the interior of the memorial will look

It will be comprised of 23 tall bronze fins, with 22 spaces in between – each representing one of the countries in which Jewish communities were destroyed in the Holocaust. Each gap is also a pathway down into a large hall that serves as the antechamber for the memorial’s learning centre, which will have a “ring” of 100 testimonials around it.

The project’s landscape architect Neil Porter has said that the raised design of the memorial would “shield” the gardens from the traffic noise of Lambeth Bridge, and create a “balcony view” back to parliament.

WSP is also working on the revamp of Buckingham Palace and several of London’s new crop of tall towers such as Lipton Rogers’ 22 Bishopsgate and Chinese developer Greenland’s 67-storey Docklands skyscraper called the Spire.