With COP26 having ended in a bit of a whimper, we must now ask ourselves what we as an industry can do to make change

I have to admit to feeling rather depressed this week about the way the COP26 climate conference appeared to falter at the last moment with its fudge over “phasing down” rather than “phasing out” coal. It seems silly to let the Machiavellian moves of world leaders affect your mood, but I don’t think I’m alone.

We have seen a real range of views and emotions expressed by industry figures this week as people have had time to digest the outcomes of the negotiations and the possible impacts at global level and for the construction sector.

Let’s get the depressing stuff out of the way first. At a top level the Glasgow Climate Pact was not nearly enough; world leaders failed to make pledges that will keep temperatures to 1.5ºC or below; fossil fuels were mentioned for the first time in a COP but the watered-down wording gives the big emitters wiggle room; and funding for developing countries hardest hit by climate change is still insufficient to cope with its devastating effects.

The COP pledges to cut emissions by 2030 still set us on a course to hit 2.4ºC of global warming – which would be catastrophic for the planet.

Given these facts, which we can all agree fall into the category of “bad news”, it would be easy to collapse into existential angst and despair. But what’s the good in just giving up?

There are tough choices, difficult conversations – and yes, extra costs – and that all has to be acknowledged. If not, the danger is we lapse into greenwash

And we should remember some progress was made. Simon Rawlinson at Arcadis and Richard Threlfall at KPMG point to significant side deals on carbon trading and net zero commitments from financial organisations that will penalise businesses with high carbon footprints. Be in no doubt, they say, the business world is set for a shake-up.

So regardless of what the negotiators and politicians did or did not achieve, the only way forward from here is to focus on the change we can all make individually and collectively.

Actually, that has been a message we heard throughout our Countdown to COP26 campaign and in our Building Talks Net Zero podcast series. The construction professionals we have been talking to have sought to focus on what they can control.

In their personal lives they may have taken steps to reduce their own carbon footprint, but they all recognise that those efforts can be wiped out in a day’s work on a carbon-greedy building project.

> Also read: Politicians have failed so it’s over to industry to take the lead, says Simon Wyatt

Take that logic on, and you – the construction experts – have a huge opportunity to cut carbon every time you turn up for work and make low carbon choices for new-builds and retrofits, whether you are acting as a client, developer, designer, contractor or specialist.

And to continue in an optimistic vein, it was heartening to see construction’s strong showing in Glasgow last week, with its own built environment day. The UK Green Building Council used it to launch its Net Zero Whole Life Carbon Roadmap, setting out a plan for the built environment to be net zero by 2050. So, we have it in black and white – net zero is achievable, and we have the steps to get there.

Also, the Construction Leadership Council hosted an event to demonstrate that on-the-ground progress is being made, ideas are being shared and competing firms are coming together to collaborate for the common good. All powerful and motivating stuff.

But it’s only the start, and so far it’s just talk. We need action and results, and we have very little time.

That is why many people who have been saying this for years now sound impatient and frustrated. The finger points most often, in the UK context at least, at the government’s reluctance to put in place mandates.

In terms of providing a stick, some measures have been called for repeatedly, including mandatory carbon assessments on projects, disclosure of buildings’ operational energy performance and planning policy to favour retrofitting, to name just a few. And of course, the carrot that could make a big difference would be a subsidised national retrofit programme.

Anger and campaigning over government inaction will continue, but the challenge from a cash-strapped public sector to businesses will always be: you are the experts in construction so work out solutions and scale them up fast.

To be fair, a lot of work is under way. But there are tough choices, difficult conversations – and yes, extra costs – and that all has to be acknowledged. If not, the danger is we lapse into greenwash, talking up great aspirations but not being honest about the hurdles ahead. One obvious hurdle is a knowledge gap – construction absolutely has to skill up for this “green industrial revolution”, whether that is training heat pump installers or getting engineers and QSs to agree how to calculate carbon budgets.

If nothing else, COP26 has focused minds. We know our planet is in peril and the prospect of a 2ºC+ rise in temperatures is scary. The challenge now is to find meaning in this crisis, to work out what this moment means for you. What role will you play? Will you look back in 10 years’ time and wish you had done more? As one of our podcast guests, eco-activist and architect Tom Bennett, put it: “Action gives me hope”. Find your action and your hope. 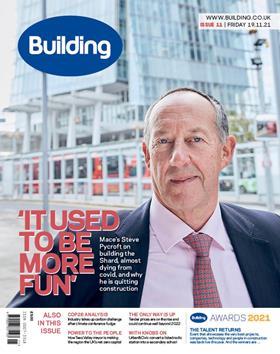 >> Read this month’s magazine for more analysis of COP26, an interview with Mace’s Steve Pycroft on why he’s leaving the industry, and much more