Behind the scenes at Heathrow Terminal 2

Heathrow’s rebuilt Terminal 2 is six times bigger than the original, yet the design team reckons the layout has been so well thought through that passengers will be able to go from plane to terminal exit in just five minutes. Well, not counting the one hour hold-up at customs, of course 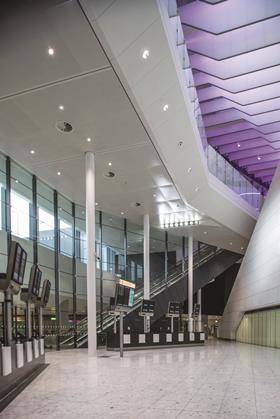 With all the furore over the third runway at Heathrow airport it might have been easy to forget that Heathrow, unlike the government, is not only committed to an expansion programme but has been actively pursuing it over the past few years. While Beijing and Atlanta airports now carry more passengers in total, Heathrow remains by far the world’s busiest airport in terms of passengers on international flights. But with the airport already operating at 99% capacity, the renewal and expansion of its terminals and infrastructure is an absolute priority.

The latest addition to this programme is Heathrow’s new Terminal 2, soon to be renamed Terminal 2 The Queen’s Terminal when it opens this summer. The £2.5bn terminal replaces the ageing 1955 Terminal 2 building, which was, until the rebuild, the oldest part of the airport. At 310,000m², the Queen’s Terminal is six times the original size of its predecessor and has been designed to handle over 20 million passengers every year. This is almost a third of Heathrow’s total annual passenger capacity and is greater than yearly passenger numbers at Luton, Glasgow and London City airports combined.

Stage 2 of the project will see the new terminal expand when Terminal 1 (built in 1968) is eventually demolished. Terminal 2’s annual capacity is then expected to increase to up to 35 million passengers. Although completion of this second £4bn phase was initially expected in 2019, it has now been delayed to 2024.

Originally designed by Foster + Partners up to planning stage, Spanish practice Luis Vidal + Architects is seeing the new Terminal 2 through to its completion. It has been built by HETCo, a joint venture between client Ferrovial’s contractor arm Ferrovial Agroman and contractor Laing O’Rourke. Construction is now virtually complete with internal fit-out taking place over the next few months. 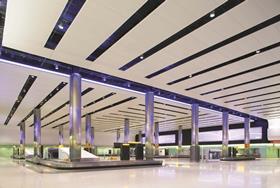 The rebuilt Terminal 2 is the biggest addition to Heathrow airport since the opening of Terminal 5 in 2008. There are striking similarities and differences between the two projects. The chief disparity involves budget. While T5 is slightly larger (353,000m²), it cost almost twice the amount of T2 to build (£4.3bn). It also employed a different procurement route. T5 was widely lauded for the groundbreaking partnering contract it adopted and is now often offered as a model of safe, successful and efficient large-scale construction delivery. T2, however, has employed a more traditional route and followed a fixed-price design and build contract.

However there are also several similarities. Although BAA has since been taken over by Spanish consortium Ferrovial and is now known as Heathrow Airport Ltd, the client/contractor team on the two terminal projects essentially remains the same. Risk has once again been shared between client and contractor. And the construction of both terminals deployed extensive use of off-site fabrication methods, a key tenet of Laing O’Rourke’s wider construction methodology.

There are also operational similarities. In keeping with modern airport arrangements, both terminals have been equipped with smaller satellite buildings adjacent to the main block. Terminal 2B enables gates to be placed on either side of an airfield, which increases efficiency. Referred to by the design team as the “toaster” block, it is accessible via a passenger tunnel located underneath the airfield and appended by plunging escalator shafts at either end. The block has been designed by Grimshaw Architects and built under a separate contract by Balfour Beatty.

Another similarity also follows conventional airport design practice. The terminal is arranged in a vertical stack with access to parking and transport at the bottom, baggage and departure halls in the middle and the departures lounge at the top. 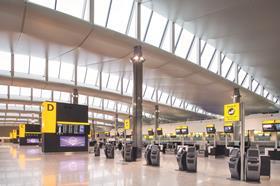 Even by Heathrow’s standards, Terminal 2 is vast. It is essentially a giant, five-storey steel shed measuring 220m x 200m. The building’s structural frame provides one of the most obvious visual differences with Terminal 5. Whereas T5 features primarily column-free spaces, creating a soaring interior vault, T2 is a steel frame building more conventionally set out on a modular 9m x 9m grid on lower floors and opening out to an 18m x 18m grid on upper floors. The interior is thereby dotted with stainless steel columns, although the wider grid allows more spaciousness in the upper departure and arrivals lounges.

The frame is partially supported by 12 braced service cores measuring 18m x 9m. These, like the vast majority of the terminal, were constructed from prefabricated units brought onto site for assembly. Practically the only major in-situ construction was the terminal’s concrete raft foundations, heavily reinforced to accommodate the A330 jumbo aircraft for which Heathrow plans to be one of the world’s biggest hubs.

Incredibly the entire structure was built without movement joints. This was partially achieved through a combination of the bracing cores and what Laing O’Rourke describes as an intense laser scanning and BIM modelling process. This enabled the design team to monitor and remediate any movement and deflection in the structure throughout the construction process.

There were several key logistical constraints during construction, most of which Terminal 5 was able to avoid. Whereas T5 is located on the periphery of the airport, T2 is right in the middle, meaning the construction team was subject to a raft of onerous operational limitations. In order to avoid interference with radar, no crane on the construction site was able to extend over 44m. The airport’s automated landing system also dictated that a strategically located louvered metal screen had to be incorporated onto the terminal’s west elevation. During construction the site could only be accessed via one road. And the entire building is located only 7m above the Piccadilly line tube tunnels.

Structurally, architecturally and conceptually, the most prominent component of the terminal is its roof - 50,000m² of Kalzip standing seam are rolled over three rows of arched, undulating eyelid-like curves. These are formed by Vierendeel trusses, which are inclined to the north to allow natural light to enter from lattice glazed skylights. This “sawtooth” roof system has commonly been used on other large-scale infrastructure projects such as Blackfriars station and the extended roof at St Pancras International in London.

Internal spaces are dominated by a tensile, white, PTFE-coated fibreglass ceiling, which has been universally applied to the roof soffit but which also follows the undulations of the structure above. The roof’s triple-barrel arrangement also relates to how spaces within the terminal are organised. The first curve spans the check-in area, the middle the security zone and the final curve represents the “airside” zone containing arrivals and departure lobbies.

The design team makes great play of having prioritised the “passenger experience” throughout Terminal 2 and it is the kind of simple, intuitive legibility inherent in the roof concept that underpins their ambitious claim that it will only take five minutes from disembarking the plane to exiting the terminal. Should this be realised they will undoubtedly succeed in enhancing Heathrow’s global reputation as well as its physical fabric. 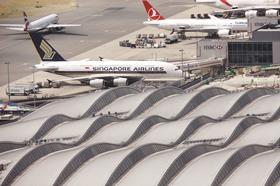