The refurbishment and extension of Fairfield Halls was delivered for Croydon council via Brick by Brick as part of a MICA-designed masterplan for the site. The brief was to refurbish, remodel and extend the halls, restoring and sensitively reinterpreting the original designs while safeguarding the building’s renowned acoustics, as well as to improve access and the building’s revenue-generating potential. MICA added a new glazed north extension, a second-floor studio theatre and a roof terrace, increasing capacity and revitalising the venue. 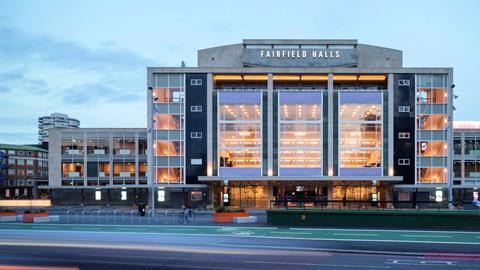 This central London project significantly upgrades the facilities offered by the Honourable Society of Lincoln’s Inn to its members and the wider community, and is the culmination of MICA’s 2014 masterplan for the historic estate. It improves both building operations and energy performance, and enhances the character of the historic buildings, revealing previously unseen features. New elements include a timber floor with underfloor heating in the Great Hall, plus an education suite and a 150-seat lecture theatre.

To create this new sixth-form academy formed for students who have a passion for film and television, WDI demolished the inner core of the existing 1930s factory building and replaced it with a steel structure. Technical challenges were overcome partly through the use of digital technology. As a BIM project, WDI’s federated model included an app for team and supply chain members to download on their phones, enabling them to view every part of the complex project in 3D at the touch of a key.

Manchester’s Murrays’ Mills is the oldest surviving steam-powered cotton mill in the world. The brief was to restore and transform the site to create a new community, while retaining as much of the historic fabric as possible. This entailed retention of the building structure and envelope. Careful analysis of the existing building forms and construction resulted in a mix of 124 flats of one to four bedrooms, including 28 duplex apartments and a townhouse in the former engine house.

The Birmingham store is the fifth refurbishment project 3DReid has undertaken for the Primark group, as part of its brief to develop a distinctive brand architecture for the retailer. Currently celebrated as the world’s largest Primark, the new building has significantly changed the dynamic of the Birmingham high street. Not only has it regenerated the old Pavilions building, it has also improved the permeability in the core retail circuit and created a link to the future HS2 development.

Riverside House is part of the English Cities Fund’s New Bailey masterplan. The existing building, a Royal Veterans’ Tavern, was a fine example of late Victorian gothic architecture but had fallen into disrepair. A new-build addition is conceived as a mirror image of the old tavern, doubling the footprint, while the street-facing facades of the original building have been restored and adapted. The interior now provides 1,600m² of characterful office space.

This transformation of a tired 1980s post-modern office building near the Old Street roundabout in London was designed to appeal to the area’s digital and creative companies. Originally split into two blocks, the firm linked the building’s floorplates with a new steel portal frame and lowered a section of ground floor slab in the centre to create a double-height, accessible main entrance. The design is influenced by its surroundings, reinterpreting the warehouses of Old Street’s industrial heyday.

This project transformed a strategic regeneration site that had been derelict for seven years. Originally a 1970s office block, it is now the first multi-let office in Manchester to achieve BREEAM Outstanding and is also set to be only the second UK building to achieve WELL Building Core & Shell certification. TP Bennett and developer Fore worked together to sensitively expand the space, adding two floors and infilling, taking it from 48,000ft² to 81,000ft² and adding a new facade system and services.