Fancy a half at your heritage local?

Historic buildings need to earn their keep these days, whether they’re in the City or the shires. They can’t all be museums or art galleries though, and the new preservers of our built heritage might surprise you

What do popular high-street retail and leisure brands have to do with conservation?

More than you might think. The modern conservation movement is almost four decades old and the practice of converting old buildings to other uses is hardly new. What is, though, is the increasing presence of popular household brands in a process traditionally galvanised by cultural organisations, public institutions, commercial developers or the church.

Converting and preserving historic buildings was once the domain of these public bodies. But as the recession shrinks public funding for cultural bodies, local authorities and conservation organisations (English Heritage suffered a 32% budget cut in last October’s Comprehensive Spending Review), it is flourishing chains such as Tesco or JD Wetherspoon that are becoming the new custodians of our historic fabric.

Does it matter? If a historic building of architectural significance is under threat, does it really make a difference if it’s saved by an art gallery or an Asda? The logical answer is no.

However, the emotive response is sometimes different. When Tesco completed its first conversion of a church into a store last November, eyebrows and sniggers were raised across the country. Yet when exclusive retailers such as Cartier and Gucci moved into London’s refurbished Royal Exchange, it was marketed as a sensitive conversion into a luxurious lifestyle destination.

Much of this is good old-fashioned snobbery, some of it emanating from architectural or conservation circles themselves. However, there is also a perception, often justified, that high-street retailers are more interested in imposing their corporate branding on converted premises than respecting the historic fabric or preserving architectural character.

As with all aspects of the built environment, the key to achieving a workable balance between two potentially clashing priorities is good design. It is therefore design, rather than the status or identity of the occupant, that ultimately determines the level of quality any conversion is likely to achieve.

On these pages we take a look at a handful of refurbishment projects that show the growing trend of high-street conservation in action.

A few yards away from the TK Maxx store lies a veteran of high street historic conversion. The Crosse Keys pub opened in June 1999 in the former premises of the Hongkong and Shanghai Bank, designed from 1914-20 by W Campbell-Jones & Smithers Architects. 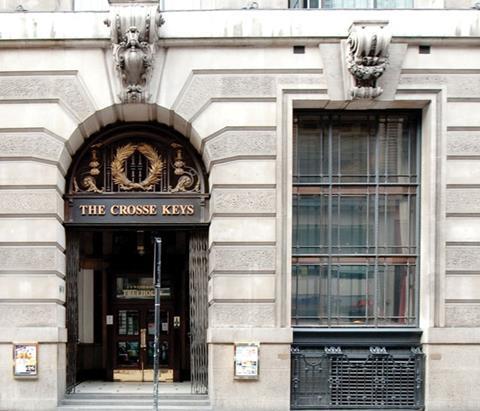 Its bombastic, monumental exterior is typical of the grand Edwardian baroque from which much of the City’s commercial character derives. But what is really thrilling is its double-height interior, a vast, temple-like banking hall complete with marble columns and opulent wood veneers.

Commendably, from the outside it is almost impossible to spot that the building has been converted into a pub. Inside too, Wetherspoon’s has realised the conversion with great subtlety and sensitivity. Original fittings and fixtures, particularly lighting and glazing, have been lovingly restored and the new central bar emerges like a wooden altar from the centre of the hall, perfectly matching the tone and character of the original fixtures.

Despite an unglamorous social reputation, Wetherspoon’s has a long and impressive pedigree in restoring historic buildings. Its Knights Templar pub behind London’s Royal Courts of Justice - a Union Bank of London dating from 1865 - is another landmark example and it recently won a bid to occupy part of the Victorian Corn Exchange in Bury St Edmunds.

These projects, and the Crosse Keys in particular, prove that the sensitive and creative reuse of redundant historic spaces can breathe new life into old buildings regardless of occupier or function.

The UK’s largest retailer knows a thing or two about historic buildings. Its conversion 20 years ago of Wallis, Gilbert and Partners’ spectacular 1932 art deco Hoover Factory in west London remains one of the most high-profile commercial conservation projects of recent times. But back then probably not even Tesco could have imagined it would ever occupy a church. Yet last November the supermarket did just that, when it opened a store in a converted Methodist chapel in Westbourne, near Bournemouth. 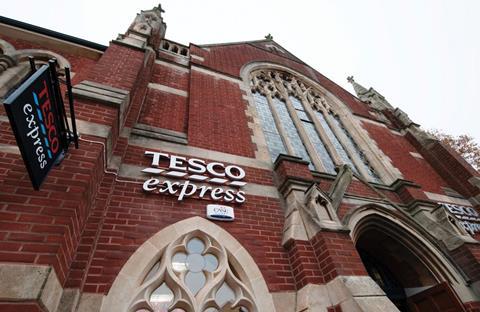 With its pointed arches, turreted buttresses and facades of brick with stone banding, the 4,000m2 building is a particularly quaint example of the familiar Victorian Gothic Revivalist style that was applied to hundreds of churches across the country throughout the 19th century. This is one reason why this particular conversion, even with the relatively subtle addition of Tesco signage over the entrance, appears surreal and incongruous. The odd sensation continues inside where the normal supermarket paraphernalia of checkouts and stack shelving is surrounded by restored granite columns and stained glass windows.

John Heade, technical director at project architect Inspire Design, explains that he “didn’t want to take away the look and feel of the original church externally or internally”. Reconciling two such radically divergent building types as a church and a supermarket was always going to make this difficult to achieve. Internally at least, the supermarket aesthetic clearly wins the day.

But the fact remains that this property had lain derelict for several years and it has now been meticulously restored and given a new lease of life. As the church was never listed, the alternative would almost certainly have been demolition, a fate suffered by countless similar disused churches across the country.

No 39 Lombard Street is one of the most spectacular examples of Victorian Italianate banking architecture in the City of London. Built in 1868 to the designs of architect F & H Francis, its stone facades are a riot of sculpture and decoration. It perfectly encapsulates the civic pride and economic power that drove the development of the City’s financial institutions. 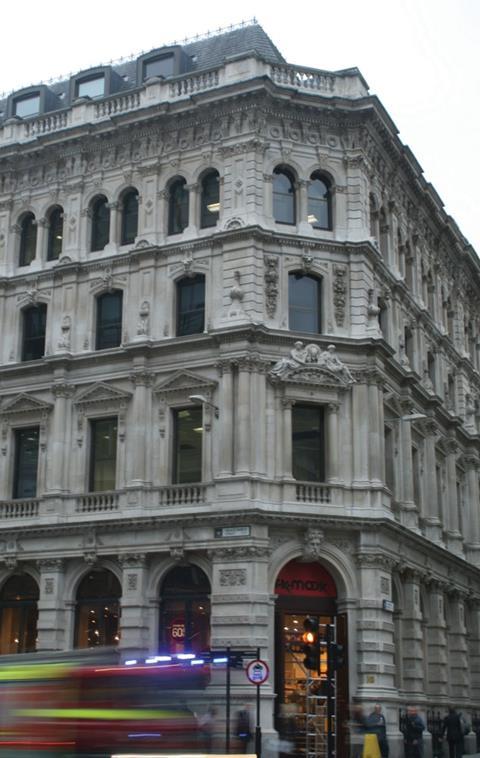 Or at least it did until its last financial occupant, Credit Lyonnais, moved out. The City was then faced with a fresh example of a problem it has been grappling with since the Big Bang of financial deregulation and electronic trading in 1986: finding new uses for buildings designed for commercial practices - such as those requiring large trading floors - that are now obsolete.

As most of its historic buildings are listed (not necessarily an obstacle to demolition), the City has been forced to get creative. Many of these old banking premises have been successfully converted into bars and restaurants, but by far the biggest change has been the introduction of retail into a district that formerly housed solely offices. The
Royal Exchange is arguably the most high-profile example of this type of conversion but the most recent is the TK Maxx store that opened last November in 39 Lombard Street.

The building remains untouched outside whereas the interior has been revamped by the designer-discount retailer’s in-house facilities team to the standard shop floor present across the entire chain. Consequently there is no trace of the ground floor’s original interiors, which is a shame. Nevertheless, by providing a new retail amenity while preserving the historic streetscape, the conversion is an imaginative one from a commercial, if not an interior design, point of view.