Housebuilders' Salary Survey 2017: On the up and up

Directors’ salaries at housebuilders are rising twice as fast as a year ago, with far more staff citing better remuneration as a reason for changing their job. With fears of a housebuilding downturn in abeyance, skills shortages are helping drive up salaries, especially outside London. 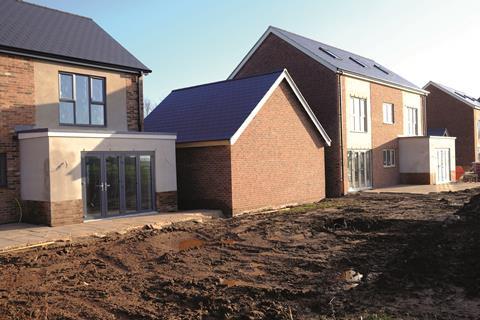 The jitters that hit the housebuilders in the wake of the Brexit vote just over a year ago – when share prices fell by anything up to 35% – seem a long time ago. While the London market remains somewhat depressed, much of the rest of the country has carried on regardless, despite the likelihood, increasing by the day, of the UK crashing out of the EU without a deal.

Hence, Building’s annual salary survey of director-level jobs in the housing industry finds last year’s fear – that a Brexit-related slowdown might call a halt to quickly rising housebuilding salaries – to have been unfounded. In fact, the survey shows pay is growing at twice the rate it was last year. Nick Worrall, human resources director at listed housebuilder Countryside, says: “Nervousness about a downturn being around the corner is not a sentiment we’re picking up at all from candidates.”

So, with housebuilder output still rising and shortages of staff with key skills as bad as ever, how are the still-expanding major builders coping? And what are they doing to attract picky, tech-savvy millennials into their businesses amid stiff competition?

The discussion around skills since the Brexit vote has been focused, understandably, on site-based workers – given the forecast of 20-25% decline in available labour within 10 years. But the situation regarding skilled professional staff is every bit as challenging. Building’s annual salary survey, undertaken by recruitment firm PSD Group, found 84% of housebuilders saying skills shortages were having a negative impact on their business, up from 81% last year. So it is little surprise that director-level salaries rose significantly faster than inflation, at around 6%. This compares with a rise of just 3% in 2016.

This finding fits with the experience of Countryside’s Worrall, who says that anything between 5% and 9% is standard. “It’s not the level of increase that our existing employees are seeing, but when you have to bring people in from outside it is absolutely that kind of number.”

Countryside employs 1,200 people, and the business brought in 400 new people last year as it grew by about 200 extra heads – with similar growth expected in the year ahead. “It is a genuine challenge for us to deliver those kinds of numbers,” Worrall says, “and we’re working extremely hard to recruit. Both we and our competitors are fishing in a pond for talent that hasn’t grown substantially.”

The biggest jump this year has been in the North-West, North-East and in Yorkshire. Salaries for managing directors within these three regions are now far higher than four or five years ago

The stress on salary levels is indicated by the fact that bigger salaries and bigger bonuses were this year by far the most common reason cited by employees for leaving an organisation. Four out of five employers said workers left for bigger salaries, up from 53% last year, while half said they walked away for bigger bonuses – up from just 22%. Duncan Bullimore, director of the building division at recruitment firm Hays, says: “It’s a bit of a merry-go-round at the volume builders. Demand for new people is high and supply is tight.”

Karen Jones, group human resources director at housebuilder Redrow, estimates that salaries overall have gone up by 3.5-4% over the past year, but with much larger increases for quantity surveyors, who fill the commercial roles. “We’re still short of QSs generally, and they’re now very well paid,” she says. “This shortage in the surveying function means we have a real shortage with commercial directors. Those jobs take longer to fill and are harder to fill.” Countryside’s Worrall agrees: “The challenge remains on the commercial side – QSs, senior buyer, estimators, closely followed by senior site staff.”

Geographically, the cooling London market has started to have an impact. While London still has the biggest employee packages by quite some distance, other parts of the UK are now growing more quickly, mirroring the much more rapid house price growth seen outside the capital over the past 18 months. Hays’ Bullimore says: “Regionally, it’s much more balanced than it’s been for a long time. Other areas are starting to catch up.” So, while salaries increased by 5% in London over the past year, they rose fastest – by 8% – in Yorkshire and the North-east, and by 7% in the North-west.

Elliot Course, associate director at PSD, which undertook the survey, says: “The biggest jump this year has been in the North-west, North-east and Yorkshire. Salaries for managing directors within these regions are now far higher than four or five years ago.”

It’s a bit of a merry-go-round at the volume builders. Demand for new people is high and supply is tight

Much of this growth appears to have been driven by national and regional firms opening new regional offices to take advantage of the strengthening market. Redrow’s Jones, whose business recruited 500 staff last year, says: “If you have someone opening a new division then you get a little spike in that area, which is what we were seeing three to six months ago. The likes of us and Barratt then get targeted by headhunters and our staff are offered more money, which means you have to pay your existing staff more.”

Seeing off the threat of poaching by rivals is a key task for the volume housebuilders, with staff often tempted by the greater autonomy offered by smaller rivals. PSD’s Course says: “Clients have found it increasingly difficult to recruit senior leaders, such as managing directors, that fit their specific requirements. When they manage it they make sure they hold on to them and so provide remuneration packages with strong incentives to stay put.”

Redrow’s Jones says this need to retain valued staff has, in part, driven the rapid growth in bonuses evidenced in the survey. The data shows the average director’s bonus now adds a whopping 78% to basic salary – up from 64% last year. At the top of the pile, managing directors command bonuses worth, on average, 92% of their salary, meaning London managing directors can easily take home upwards of £400,000.

“A big attraction of the sector is the bonus,” says Jones. “Directors and managing directors set a lot of store by it.” But by bonuses not being paid until after they are accrued, and with payment dependent on staff staying with the business, they act as “golden handcuffs” to stop people jumping ship. Jones says: “If you walk away, you’re walking away from a lot of accrued bonus. It’s a big retention tool.”

As well as improving the financial rewards, housebuilders are also having to look at how to reshape their business practices to make them more attractive to new recruits. This applies particularly to the millennials, who are increasingly reaching senior positions but may have different expectations from employers.

Countryside’s Worrall says that beyond salary, factors such as proximity to home and work-life balance are rapidly rising up the priority list of the people Countryside is looking to recruit. “All the things that people say are important to millennials are becoming more important to our candidates – locations, work-life balance, and options around flexible working. “This is a challenge not just because housebuilding is quite a conservative sector, but also because the reality is we do have standard hours for sites to be open and we need to be able to support that.”

Hays’ Bullimore agrees with this assessment, saying that its own research shows money is less important to employees the younger they are. “The younger generation are willing to exchange money for other things like training and professional development, health and wellbeing and flexibility.”

He says: “While there’s no getting away from the fact these businesses have some immovable demands, candidates want to see there’s a degree of flexibility from an employer. Any employer that just says a flat ‘no’ to flexibility will not be attractive.”

Meanwhile, both Jones and Worrall say their businesses are investing more in training up employees internally, a claim that is backed up again by Hays’ own research. Bullimore says housebuilders are spending more money on training and development than in previous years, as a tool to attract new staff and retain existing ones.

Worrall says that so far his firm has managed to retain the right quality of staff, despite the huge competition for talent. But whether the industry as a whole manages to keep doing so in the year ahead remains to be seen.

The survey was undertaken in September by PSD Group, which specialises in senior-level search and selection across the residential and property sector. There were two elements to the research: an attitudinal survey that targeted approximately 7,000 individuals at senior management to director level across the residential sector and data from placements made by PSD in 2017.

For further information on the survey please contact Elliot Course, associate director at PSD Group, on either 0207 970 9792 or elliot.course@psdgroup.com