4
How cool is that? Hull Truck Theatre's passive-ventilated venue
Focus

How cool is that? Hull Truck Theatre's passive-ventilated venue 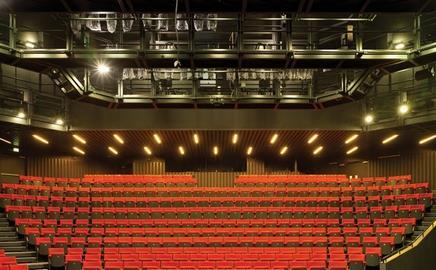 Hull Truck Theatre’s new performance space uses a passive ventilation system that relies on a warm audience reaction – fortunately, that has never been in short supply

Back in 1971, audiences at one of Hull Truck Theatre’s performances would have been fairly forgiving of their surroundings. After all, the theatre company at the time was operating out of the back of a van and when in the early eighties it finally settled in a permanent home, that was a converted Methodist chapel. But this week it moves into swanky new premises where expectations will be a lot higher. Despite this, the designers have shunned the comforts of an air-conditioned box and instead opted for a design that only sips energy.

Sandy Wright of architect Wright & Wright explains that sustainability wasn’t particularly high on the agenda at first, but when he suggested going for the low-energy, passively ventilated approach, the client bought into the idea. The concept is simple. Instead of using energy-hungry fans to keep the densely packed 400-seat auditorium comfortable, it channels fresh air into the space at low level and relies on the natural buoyancy created by the heat of the audience and lighting to carry the stale air upwards and out of the building.

It’s an idea that has been used before. In the case of the Hull Truck Theatre, though, it couldn’t have been a worse location, says Ian Smith of environmental engineer Max Fordham. The site sits next to the main six-lane drag into the city centre and backs on to a shopping centre. “The challenge was to get fresh air into the building and back out again with all the noise and pollution.”

Wright & Wright’s house style is for heavyweight buildings, which worked well with the desire to maximise the structure’s thermal performance. This was essential, says Smith, as theatres generally have a year-round excess of heat that needs to be got rid of, and the ability of the structure to absorb and release some of that heat was key to the strategy.

The main auditorium is ventilated by two huge concrete shafts that drop from roof level down either side of the stage opening and into the basement, before running underground and popping up beneath the raked seating.

The size of the shafts is crucial to pulling air into the building without the need for fans. They each have a free cross-section area of 5m2. According to Smith, conventional ductwork brings a lot of resistance, which means you have to put a lot of energy into pushing the air through the system. “The obvious low-energy solution is to have no pressure drop – then you don’t need a fan. However, to achieve this you need a shaft with a large cross-sectional area.”

Instead of a fan, what drives the ventilation is the heat given off by the audience – about 100W per person – and 50kW from the lighting – which warms the air in the main auditorium. This rises up and out of the building and – because of the low resistance – is enough to drag fresh air in through the two huge shafts.

It might have been easier to have brought the air in at low level; however, Wright says the size of the shafts meant integrating them into the elevations wouldn’t have worked architecturally. By placing them in the centre of the roof, they are invisible from street level. But having the inlets at roof level had another advantage: the pollution is less and crucially the 50m long route – with some additional acoustic attenuation – is enough to prevent outside noise from disturbing performances.

Incoming air is tempered by the concrete as it passes down and through the shaft, which should prevent any uncomfortable cold draughts as the air enters into the space through the raked seating. However, a bank of finned tubes in the space beneath the seating can be used to fine-tune the temperature, if it is below the required 18-19°C before it enters the space.

The biggest concern is what happens in very hot weather. “We thought we wouldn’t need any cooling at all, but then the theatre told us about their plans to run two or three matinees a week as well as the evening performances.”

Smith says the problem with this is that when it comes to the evening performances the coolth stored in the building’s mass might have been depleted and so the air entering the space would be too warm and the auditorium would become uncomfortable. So the design team has introduced a “modicum” of cooling. This takes the form of a 50m borehole that draws water from the underlying aquifer and simply runs it through a heat exchanger before returning it to the ground. This was the lowest-energy solution – power is only needed to run the circulation pump. It also provides a degree of future-proofing as a heat pump could be connected into the system to provide more cooling.

In previous naturally-ventilated theatres, the auditorium has been expertly ventilated but the stage area hasn’t. To tackle this, outgoing air passes via the top of the stage, pulling the stale air with it, before entering a 20m-long plenum and exiting through a roof cowl. Cleverly, the plenum is built around the roof structure and the rafters which run the length of the plenum are clad in acoustic lining material which absorbs any noise outside the main auditorium.

The outer casing of the cowl is designed to prevent rain from entering but also harnesses any wind to assist in pulling exhaust air out. But what happens on a very hot day when there is no wind? A fan is built into the cowl. “We would rarely expect the fan to run, but it is the first thing we would try if conditions are too hot. If conditions are still too warm, we then turn on the cooling,” says Smith.

Now open for business, the Hull Truck Theatre has received a B rating for its energy performance certificate, making it one of the best-performing theatres in the country. Wright admits to being nervous when he first suggested creating a passively ventilated theatre. Time will tell if his stage fright was justified.

Original print headline: 'How cool is that?'