In Business: Contractors’ exposure to the ailing aviation market

The pandemic has brought airport expansion plans to an abrupt halt. What is the impact on companies relying on the construction work? 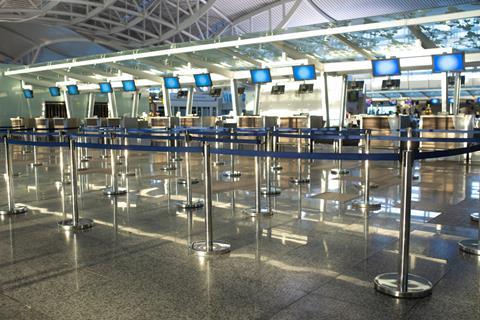 As covid first struck, passengers steered clear of airports and have continued to do so with Manchester Airport owner MAG saying passenger numbers at its three airports in December were down by close to 90% on the same month in 2019

Once considered a banker for the industry, the aviation sector has been one of the more high-profile victims of the global pandemic.

“It’s fair to say the bottom has fallen out of the UK market,” says one firm, who asked not to be named.

And with countries around the world imposing ever more strict travel policies in the face of new covid variants, contractors are not expecting things to shift too much from their current malaise any time soon. “It’s going to take four or five years at least,” is another’s gloomy assessment.

Take Heathrow Airport. It was not just the third runway put on hold; all the other bits were as well. Plans to expand T2 were parked. Laing O’Rourke, Ferrovial and Balfour Beatty have all worked on the first phases of the expansion – known as T2A and T2B – but more is, or was, planned: T2C and T2D. The expansion of T5 was proposed as well.

In 2019, a £3bn framework, originally awarded to four firms in 2014 – Morgan Sindall, Balfour Beatty, Mace and Ferrovial – was extended by the airport for a further two years until the end of 2021. This bit was centred on improving existing infrastructure and assets as opposed to new terminal buildings and infrastructure.

But last summer, when announcing its half year results, Morgan Sindall warned that it expected “minimal” work at Heathrow for the rest of 2020 and 2021. The sector is not expected to get a glowing write-up when the firm publishes its 2020 results the week after next.

Heathrow’s expansion plans were all about improving passenger flows and getting through the airport more efficiently. Obviously, that’s not happening right now

Another firm on that framework, Balfour Beatty, announced last month a rejig of its regional UK construction business with the contractor merging its standalone South region into its North and Midlands arm. As a result, the division’s southern boss Beth West left at the end of last month just one year after joining from developer Landsec.

In an email to staff, UK construction boss Mark Bullock blamed the “poor prevailing market conditions” in the south for the move – singling out aviation and defence as the culprits.

The chief executive of Turner & Townsend, Vince Clancy, told Building recently that the volume of business in aviation his firm had done in the past year had nosedived by 60%. Another, who asked not to be named, said it had forecast 25% growth in the sector before covid blew up but had since revised this down to zero. “If a firm had a £400m/£500m order book from Heathrow, then right now £4m is a lot,” he adds. “At the moment, the only stuff being done is safety critical work.”

And to think last year, the Construction Products Association was forecasting 5% construction growth in aviation for 2020 and 3% this year as airports bedded down for a surge in passenger numbers and committed to long-term spending pledges: a £500m expansion of Birmingham Airport, a £600m plan at Stansted, a £1bn plan for Manchester, never mind the billions that would have been spent building a third runway at Heathrow.

The airports industry has long been an important one for construction. Not only does it hand out long-running, big-ticket capital projects that give firms visibility on incomes several years into the future but the sector has always been something of pioneer when it comes to initiatives like offsite manufacturing and health and safety.

T5 principal contractor Laing O’Rourke completed over two million man hours without a reported incident while it built a significant amount offsite including a customised car park, modular plantrooms and over 1,400 preassembled modules for the M&E work.

“It’s always been a very good client,” says one firm, “both in leading the way with innovation and a leading source of work. We’re staying close to it for when it does come back but it’s taking a real kicking at the moment.”

With no passengers using their services, airports have had no option but to mothball jobs. “Heathrow’s expansion plans were all about improving passenger flows and getting through the airport more efficiently,” says a source. “Obviously, that’s not happening right now.”

In its latest update last month on passenger numbers, those produced by Manchester Airports Group, which owns Manchester, Stansted and East Midlands airports, make for startling reading. In December 2020, it served 88.9% fewer passengers at the three than the previous December. The year-on-year change at East Midlands was nearly 93%. The group’s rolling 12-month passenger total is down 75.1%.

When airports shut down jobs, jobs at the firms get lost too. Before Christmas, Mace chief executive Mark Reynolds said a chunk of the 270 people it laid off last year were from its £200m-a-year aviation business. It was working at Stansted, building a £150m arrivals building at the Essex airport as part of its expansion, but that has been on hold for months.

There is a glimmer of hope for those working overseas, especially in countries where airports are owned by the government. One firm said: “They are pushing ahead with their plans because it’s part of that country’s infrastructure plan. Over here, private investors are very reluctant to put money into something like airports right now.”

The UK’s expertise in airports stretches right across the industry from architects through to consultants and contractors and the worry is that some of those skills will be lost for good the longer this goes on. Airports have had to make job cuts too and just getting a construction programme like the one planned at Heathrow back up and running will take a lot of effort after a prolonged shutdown. “Heathrow will have lost skills and logistically it’s difficult to start up again overnight,” said one Heathrow contractor. “It will take a good couple of years.” Last summer, the head of Heathrow’s expansion programme Phil Wilbraham left after 17 years at the airport.

Some suggest there might be a brief renaissance for airports this summer if the global vaccination programme and the yearning for two weeks on a sun-drenched beach allow for countries to lift restrictions.

But if there is, many think it will be a false dawn. “The sector will come back, people will be desperate to get away when restrictions ease,” one firm said. “We have to accept there will be some who won’t want to fly again so how that will hit long-term passenger numbers, we have to wait and see. But even if there is a respite this summer, I think it will be 2022 at the earliest before it comes back and that’s being optimistic.”