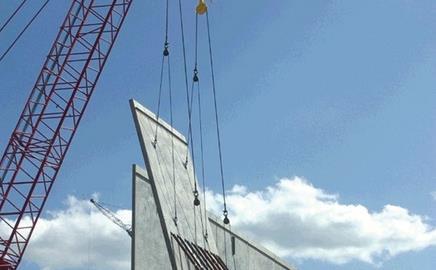 A recent study by The Concrete Centre has underlined the demand for a cost-effective alternative to the ubiquitous tin shed. The study, led by Dr Bernard Rimmer, formerly a director of Slough Estates and now a construction process and product innovation consultant, examined the industrial shed market, interviewed agents and developers and analysed a range of structural options.

The study found a number of drivers for change. The most significant of these continues to be cost with sustainability becoming a major issue, with growing emphasis being placed upon reduced energy consumption, increased airtightness and increased thermal efficiency. The inherent thermal efficiency of concrete structures reduces the temperature swings between day and night and so reduces the need for air conditioning and heating.

Meanwhile, recent catastrophic fires, such as the Primark warehouse fire in December 2006, have focused attention on the performance of sheds in fires. It is predicted that clients and their insurers will start to demand fire resistance that goes beyond the minimum 30 minutes required by the Building Regulations.

Fire-fighters are concerned primarily with saving lives, not property. When convinced that no occupants’ lives are threatened, they will often leave an industrial building to burn and concentrate on preventing its spread rather than risking their own lives by fighting the fire within a structure that only has 30 minutes of fire resistance. Concrete, however, offers up to four hours inherent fire resistance.

Security is also a growing issue. Any structural solution that offers greater resistance to unlawful entry, such as ram-raiding, should prove attractive. In addition, robust concrete walls will also offer greater resistance to impact damage from inside a building, as often caused by fork-lift trucks, for example.

Concrete sheds not only offer comparative costs but are also quicker to construct than the steel equivalent, as the build programme can start immediately. They can also be an architecturally attractive option for designers as the facade can be of any finish, and they can be easily combined with non-concrete components such as lightweight roofs.

Taking all of the above into consideration, currently the best alternative to steel portal frames is a concrete load-bearing wall with a lightweight roof, which is a very straightforward and flexible design and construction approach. The load-bearing walls can be either propped or cantilevered. For the propped wall, the roof provides the propping force and takes peak horizontal loads back to the flank walls. The walls are designed to be self stable under reduced horizontal loads. For the cantilevered option, the walls cantilever from the base and do not need any propping or reliance on the roof for stability, even under peak loads. However, these walls do need to be thicker than propped walls.

Both wall options offer the same range of benefits that are of particular value for this market:

The foundations for concrete walls will be heavier than for a normal portal frame solution. However, the loading on the ground will be a line load from the walls rather than point loads from columns, which should simplify the foundations.

The cladding can be whatever is required. A major benefit of using concrete walls in the precast or site cast mode is that if a masonry or concrete finish is required then it can be incorporated into the manufacture of the wall panel so that both skins can be lifted into position in one operation, saving construction time.

The construction of the roof can also be optimised with concrete walls as, unlike with steel portal frames, the spacing of the roof beams is not dictated by the portal frame spacing. Roofs may be light or heavyweight.

The use of concrete walls for industrial sheds is widespread throughout continental Europe and the time is right to use this system now in the UK. One of the reasons for this may be the continued rise in steel prices. The development of a viable concrete option will do much to address this. The Concrete Centre is working with partners such as Construct, the concrete contractors group, and concrete product manufacturers to facilitate the availability of a real alternative to the tin shed.