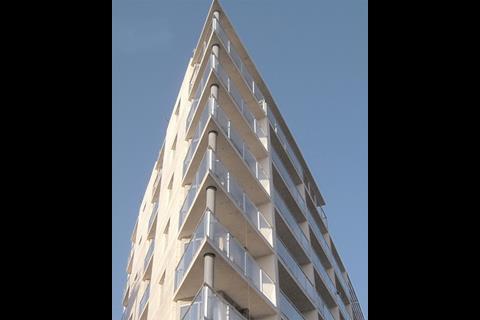 Crosswall construction at Prospect Hill, Finglas Road, Dublin. The solution, from Trent Concrete, enabled the project to go from ground level to a watertight eight-storey envelope in just 21 weeks 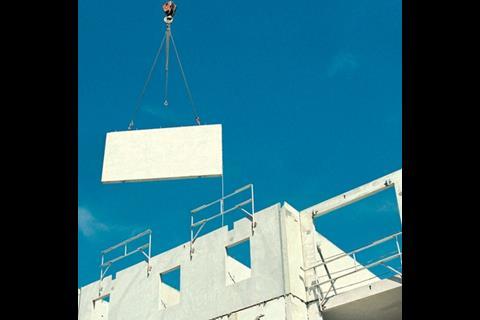 Source: Photo: University of the West of England: Bristol

Much of the drive for innovation in housebuilding is focused on increased efficiency and reduced costs. Recognising this, the concrete industry is delivering a range of construction approaches that are cost-effective and efficient but still provide the traditional, inherent benefits of concrete. Jeff Dyson, head of housing solutions at The Concrete Centre, reports

There is an increasing emphasis on efficient methods of construction from the government and other housing clients. They want high-density, high-performance homes that can be built fast, and concrete is well-placed to provide them. The government requires that 20% of new-build homes in the social housing sector use such methods, and the Housing Corporation allocates 25% of its funding to developments that employ efficient methods of construction. In addition to this, heavyweight construction is increasingly being recognised as a good way to reduce energy consumption in homes.

Tunnel form construction is increasingly used for multi-storey developments. It’s fast becoming one of the most popular types of cellular construction in the UK thanks to its cost effectiveness, productivity and high quality. As a fast-track method, tunnel form is particularly suited for apartment blocks, hotels and student accommodation. Furthermore, despite being primarily used for cellular construction, the method can easily be designed for multi-bedroom apartments either in its first use or for future reconfiguration.

During the tunnel form process, a structural tunnel is created by pouring concrete into formwork to make the floor and the walls. After 24 hours, the formwork is moved so that another tunnel can be made. When a storey has been completed, the process is repeated on the next floor. A strong, monolithic structure is thus constructed. Structures can be low-rise or multi-storey. Tunnel form creates cells that are from 2.4m to 6.6m wide. These can easily be subdivided to create smaller rooms. Where longer spans (up to 11m) are required, the tunnel form can be extended using a mid-span section. The walls can be designed as deep beams and supported at low level on fin columns to permit car parking.

Tunnel form simplifies the whole construction process by enabling a smooth and fast operation that can result in frame costs being reduced by 15% and programme by 25%.

Similar benefits of speed and high-performance are offered by precast crosswall which provides an efficient frame without structural downstands. This results in a structural floor zone of 150-200mm. Load-bearing walls across the building provides the means of primary vertical support and lateral stability, with longitudinal stability achieved by external wall panels or diaphragm action taken back to the lift cores or staircases. Structures up to and including 16-storeys have been completed in the UK using crosswall construction. Part A requirements for robustness are provided by vertical, horizontal and peripheral ties.

Crosswall construction is fast and cost-effective because the concrete crosswalls and floors do more than just structural load carrying. Partitions and party walls are largely eliminated. In some cases the internal leaf of cladding is also eliminated as it is part of the crosswall structure. As with tunnel form construction, acoustic separation and additional finishes with crosswall are minimised as the floor and wall panels provide the required airborne noise separation. The acoustic performance of both systems is excellent because of their mass and acoustic damping.

Fast overall project times are possible as once part of the structure is erected follow-on trades can quickly commence work. This is the case because the wall and floor units provide a semi-internal environment. Service runs can be pre-installed before the units are cast. Other facilities, such as bathroom pods, can be installed as completed units during frame erection.

It is this capitalisation of concrete's traditional, inherent benefits such as thermal mass, sound insulation and robustness, together with built-in fire and flood resistance that make these new construction methods so appealing.

Good surface finishes to wall and floor units minimise site works in making good and the necessary additional finishes. It is possible to simply give a skim finish. This has the benefits of fast and cost-effective construction and skim finished walls and ceilings need a minimum of ongoing maintenance – maintenance of lightweight finishes which are prone to damage is avoided. Tight tolerances enable reliable fitting of bathroom pods, prefabricated built-in furniture and carpets. This enables fast and cost-effective fitting out.

Speed of construction is also a feature of another use of concrete that is relatively new to the UK: insulated concrete formwork (ICF). ICF provides the permanent formwork for in situ concrete structures with the formwork left in place for the building as thermal insulation. Used extensively in Europe and North America, where it has proved its toughness and value, ICF is now gathering momentum in the UK.

In essence, ICF consists of twin-walled expanded polystyrene (EPS) panels or blocks that are built up to create walls. This formwork is then filled with ready-mixed concrete to create a structure that is ready to accept the floor construction or roof. The formwork remains in place to provide complete insulation for the walls of the finished building and provides a uniform surface that is ready for the direct application of most internal finishes and external cladding systems.

The combination of the insulation and in situ concrete provides a building with high sound insulation and thermal performance with a U-value of under 0.20W/m2K, well below Part L requirements. The build process is fast, tidy and precise with low labour requirements. Typically, an experienced team of four can erect the formwork and place the concrete for the walls of a three-bedroom bungalow in just one day.

High levels of thermal mass are also provided with tunnel form and crosswall construction. Independent research shows that the benefits in winter through passive solar design can reduce heating energy by 11% and offset the marginally higher embodied carbon dioxide of concrete construction compared with timber in only eleven years (Hacker et al, Embodied and Operational Carbon Dioxide Emissions from Housing: A Case Study). In terms of summer performance it is clear that thermal mass reduces the risk of overheating and the need to retrofit air-conditioning in the future.

The research shows that homes built from lightweight construction could overheat during the summer in as little as 14 years.

It is this capitalisation of concrete’s traditional, inherent benefits such as thermal mass, sound insulation and robustness, together with built-in fire and flood resistance that make these new construction methods so appealing. They combine modern innovation for efficiency and fast construction with proven inherent benefits. A winning combination.