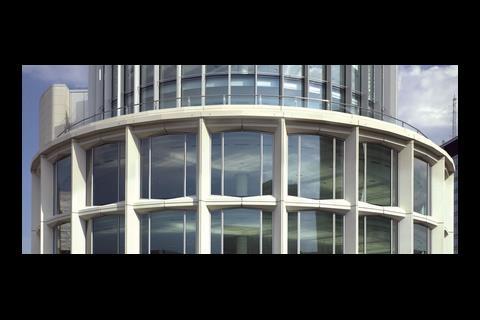 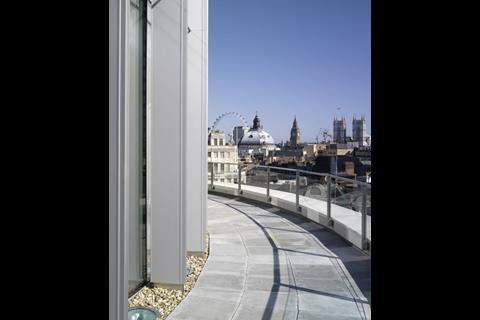 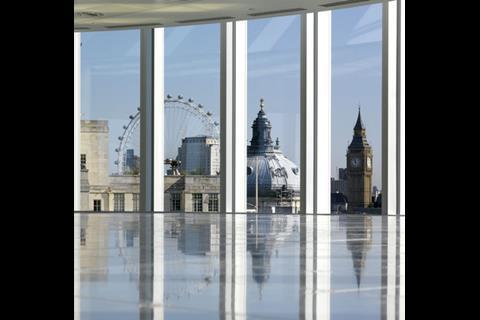 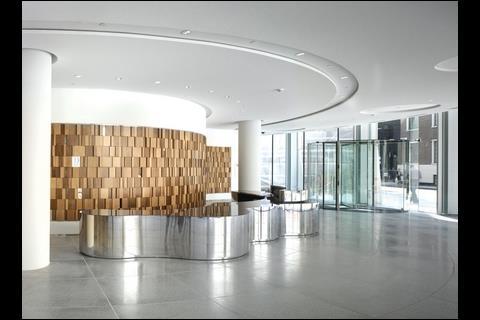 Developer Asticus chose concrete for a cylindrical London office block. The results were beautiful – and saved money. Guy Thompson, head of architecture and housing at The Concrete Centre, reports

The Caxton Hall, originally Westminster Town Hall, was designed by Lee and Smith in 1882-3. Located in the heart of the St James’s Park area, and within a few minutes walk of both New Scotland Yard and the Home Office, the building was in a prime location. But, surprisingly, it was unused and neglected since the 1970s, despite being listed as a grade II structure in 1984.

The derelict site was bought by German developer Asticus with planning consent to build offices. The outcome is a remarkable 10-storey cylindrical structure by architect Lifschutz Davidson Sandilands (LDS) who moved forward the drum-shaped building originally evolved by Foggo Architects.

The developer wanted as many floors as possible, but the project was restricted by Westminster planning department’s maximum cornice height dictate. Also, circular floor plates can lead to inefficient office spaces. This was resolved by going for a cruciform layout that allowed standard component floors, ceilings and also conventional space planning to be employed. A “blister” structure projects 7m into the only available, hidden, corner of the trapezoid site. The “blister” discreetly takes care of stairs, lifts and services, leaving the main office floors as clear lettable floor spaces with unobstructed views out.

Respecting Westminster’s requirement that no plant rooms should be visible on the roof, the plant room is tucked in below the roof of the stepped back structure of elegant steel fins and glazing panels that crown the building. The cylindrical office building, which has an internal diameter of 28m, is slotted carefully into the site, adjacent to but just over a metre away from the brick walls of the neighbouring Victorian buildings and presenting a visually gentle, delicate concrete and glass curved facade onto the street.

“The team looked at the structure and we went for concrete,” says Paul Sandilands of LDS. “Overall construction times were critical, and what was driving this whole project was the procurement of the cladding. We went from no lead-in time on the project to having cladding contractors involved within 13 weeks. The concrete frame allowed a cladding system that could be attached simply and quickly. Speed of construction for the frame was not as much as an issue as buildability and simplicity; overall the programme was being driven by the cladding procurement. At the end of 2005 heavy international demand saw a major spike in the steel market, so the client made substantial savings by the use of a concrete frame.”

With St James’s Park underground station nearby, and buildings hemming in the site on three sides, piling the foundations for the new building was not really feasible. At the same time, structural engineer Adams Kara Taylor (AKT) knew that as many floors of commercially lettable space had to be squeezed into the structure as possible, which meant that floor heights were slightly compressed.

Responding to these demanding criteria, AKT designed a traditional concrete superstructure that could be swiftly constructed using cast in situ elements. Construction was by sitting cast in situ concrete columns and extra thin highly reinforced concrete flat slabs onto a traditional concrete raft foundation. To help the building fit into its surroundings, LDS worked hard to ensure the white concrete mix specified was as close as possible a match to other Portland stone buildings nearby. The extra-thin concrete floor slabs were crafted by introducing a pre-camber which, combined with steel reinforcement to a higher specification than normal, give subtle extra strength to the slender concrete floor slabs, spanning across the spaces while still only 320mm thick. Central spans from the concrete floor slabs are taken onto just four fair faced internal reinforced concrete columns with diameters of just 800mm, set in a central square at 11m spacings.

A ring of cast in situ concrete perimeter columns rise at 3.6m centres to support the flat slabs. These columns are concealed within the tapered concrete casings integrated into the cladding design to minimise visual impact to external elevations. At the eighth-floor terrace level the concrete perimeter columns are replaced by steel box sections that serve to control slab edge deflections.

With on-site fast-track construction driving the project, LDS took a fresh look at the design of the building’s envelope. The envelope was analysed and two different components identified and separated out – the cast in situ concrete perimeter columns, and the external casing panels which were precast concrete. The slender casings were cast off site, and integrated with the glazing to create entire bays that were brought to Westminster ready to be craned into place and hung from the floor slabs. The tight site only allowed for one crane, so hook time to move the cladding panels was at a premium, but still allowed for five or six units to be placed each day. “Transporting and handling the storey height pre-glazed panels drove the design,” recalls Sandilands. “They have no steel sub frames, but they do have a high level of stainless-steel reinforcement, which allows each unit to be very slender. Cast into steel shuttering, the concrete is smooth faced and etched. We used a through mix, the same colour all through the panel. The result is beautifully cast panels creating a more elegant facade.”