With the rise of more intelligent building control systems, offices are beginning to know their occupants’ needs almost before they do 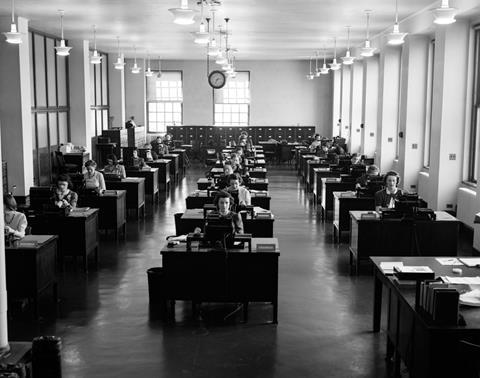 The current commercial design process is flawed. The idea of starting with an architectural concept and finishing with the workplace design overlooks the building’s key purpose: enabling human productivity.

So says Paul Fletcher, chartered architect and client adviser at consulting engineer Zisman Bowyer & Partners. He argues that for a workplace to be productive, the design should start with the needs of the employee and finish with a building form that meets these requirements. “The building’s physical form falls into the realm of architecture; the engineer then modifies that environment inside a building in response to the architecture and external environment, but in all of this no one is considering the human occupant,” he says. The question is, how do we assess which factors are important in improving productivity?

Any building, regardless of age or type, operates as a complex system of interaction, where the external environment, building fabric and M&E services influence the activities and needs of the people who occupy it. But understanding the precise impact of this environment on productivity is far from straightforward.

Data capture and audit specialist Leesman has developed a suite of tools specifically to measure workplace effectiveness. These tools are based on audits carried out electronically via web interfaces. “These provide an insight into how well a workplace environment supports an employee’s work activities,” Fletcher says.

Employee audits, such as those by Leesman, can be used by a business to rate the effectiveness of individual workplaces, to compare one office floor against another, or even to see how the environment in one building equates to that in another. According to Fletcher, some businesses planning to relocate or to move into new premises are now auditing their existing workplaces so that they can understand what is important to their workforce. “Businesses are using the evidence from the audit data to help generate a design brief for their new premises,” he says.

Currently, Leesman has 11,500 respondents on its database. Based on an aggregation of all these responses the firm produces the Leesman Index. The index enables any business to benchmark its working environment against those on the firm’s database. In the future, as the database continues to grow, it will be possible to subdivide the data into specific business sectors, such as legal or banking. This will enable designers to take a more evidence-based approach to workplace design.

A sample of the type of information gathered by an audit is shown in the graph overleaf. This compares the features employees rank as most important - the red line - against the number of respondents satisfied with the feature - the green line. The graph makes salient reading for building services engineers: for example, temperature control is ranked as the fifth most important feature by over 85% of respondents, yet only 20% of respondents were satisfied with it. “No matter what the type of business, temperature control always appears to come out as highly negative,” says Lisa Bhudia, operations manager at Leesman.

On this evidence alone, it would appear that control of the office environmental conditions needs to change. “The building management systems (BMSs) haven’t evolved for the past 15 years; they are capable of doing way more than they currently do,” says Tony Williams, a director of BMS provider Cube Controls.

Williams says that the revolution in building controls will come when more personal employee data is linked to environmental preferences, and that this will drive greater productivity. “The biggest change will come when psychometric information from HR records is fed into the environmental control settings,” he says.

Such a system would know who was sitting where in an office, their age, job role, gender and personal preferences - based on their psychometric profile - and adjust the temperatures in response. “Employers just haven’t joined the dots of office environment to productivity - once they do they’ll start to see an improved output, fewer sick days, less staff turnover,” Williams predicts. “It will start to have a big financial impact, so the BMS becomes a business management system rather than simply a building management system,” he adds.

Advances in energy-efficient LED lighting technology, too, now make it easy to change the colour and brightness of individual lamps to help create a productive working environment. “Knowing people’s psychometric profiles will enable BMSs to tweak the colour and intensity of individual LED fittings in response to outside conditions to improve the mood of people in the office, and hence their productivity,” says Williams.

One of the big challenges in tailoring the environment for individual workers is the sheer number of sensors and controls that need to be installed on an office floor. However, a new breed of LED lighting controls, which cover an office floor with low-cost sensors, might provide the answer.

One such product, recently launched in the UK, is Redwood Systems’ Building Performance Lighting System. A fundamental difference between this and most other lighting controls is that it has been developed specifically for LED lamps. The system uses an efficient inverter to convert AC electricity to DC, which LEDs run on, in order to eliminate the need for an inverter on each lamp. More importantly from an employee’s perspective, the use of DC electricity allows the communication signals to be carried by the same cabling. This means that a space can be blanketed with a pervasive network of sensors, one per LED fitting, to collect data on light levels, temperatures and employee movement. 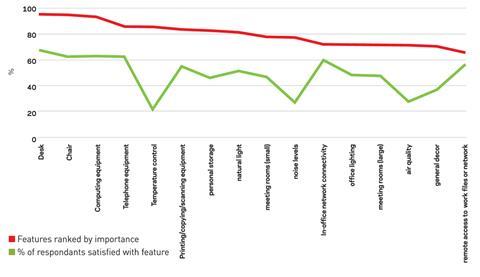 The sheer number of sensors enables the system to intelligently control light levels, supplement security systems, locate occupants in an emergency and even identify when an intruder has entered the building. Facebook employees on its California campus currently use the system’s occupancy sensors to help them to find empty meeting rooms.

In addition, when linked with the heating and ventilation controls, the sensors can monitor and control room temperature and fresh air supply to save energy or improve the working environment. “We can have a very high density sensor network so that the facility professionals can gain a detailed understanding of what is going on in a building,” says Sam Klepper, chief marketing officer at Redwood.

Meanwhile, Building simulation software is also evolving to become a key component in improving productivity. “Our vision is that the building model is used from conception of the project through its design and commissioning to inform the operation of the building,” says David McEwan, UK director of building simulation software specialist IES. In the coming decade, IES is looking to develop its simulation software so that in addition to being used in a building’s design, the same model can be used for commissioning the building and, ultimately, to optimise its operation. “We’re about workflow - only doing things once - so if you populate a model with information you only need to do it once because all the modules are joined up,” McEwan says.

Current Building Information Modelling (BIM) systems enable designers to create the geometry of a building and then use the model for tasks such as thermal and lighting simulation and Building Regulations compliance checks. “With the building in use you will be able to add live information to the software to see how the building is actually performing compared to what it should be doing,” says McEwan.

For example, a model might have several hundred thousand nodes within it, so the temperature of every surface of every room is known. By way of comparison, a BMS might have, at best, a few hundred sensing points. “If you can calibrate the model from the real sensing points, the model will fill in the gaps,” McEwan says. By giving people the tools to optimise their environment, he adds, in the future it will be possible to improve their productivity. “We’ve still got a way to go with this but we are on track,” he says. “There is a lot of interesting work that can be done from a productivity perspective. You couldn’t do it at the moment, but with a live model you could start to use it to analyse the impact of different changes on the building.”

The body of evidence is growing on the impact of the workplace on employee productivity. “With the potential of BIM to simulate workplace performance, the implications of choices made during the design can be linked to business activity,” says Zisman Bowyer & Partners’ Fletcher. And when that link is made, it might just turn the building design process on its head.