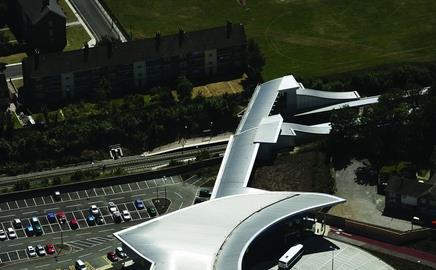 Q. How did you come to work on the project?

Nick Bogle We won the project through a competitive tender as part of a team led by Halcrow.

Graham Cleland We’re a Kalzip-approved contractor and its parent company Corus asked us if we wanted to be involved in the project. It was a particularly complicated design that required 3D design capability. We have our own people who carry out that.

Q. How did you plan to meet the client’s brief?

NB The building connects six railway platforms, a car park and a bus station, and there is a 9m rise from the lowest point of the site to the highest. We wanted to link these with a single, seamless building. The roof was developed to achieve this and avoid any jagged edges.

GC Because it was such an unusual design, we were brought on board in the early stages. There was a lot of interaction between us and Jefferson Sheard, as well as Halcrow, to make sure the architectural vision could be translated into what you see now. In particular, we had to provide a lot of advice on where the support points and the secondary steel needed to be placed to support the curvature of the roof.

Q. How was the design developed?

NB The only way we could create the smooth shape was by having a roof that curved in three dimensions. This had never been done before with a Kalzip roof and it pushed the flexibility of the sheets to their limit. The challenge was how much we could bend the individual roof panels to make them fit the form we wanted. We had to sit down right up front in the project to work through how we were going to do this.

GC The key challenge was to convert the faceted steel frame into a 3D curved structure. We modelled the roof structure and from that we were able to identify where the support points and the secondary steel needed to be located to support the roof. All the components of the roof were bespoke and were designed and manufactured to fit together like a jigsaw. The shaped and tapered sheets, some of which curve in three planes, required individual design. Our modelling was also crucial in developing the curved bullnose features from the faceted steel structure, particularly in where the secondary steel needed to be placed to support them.

Q. Were there any buildability issues?

NB The main issue at the beginning was, could we actually do it? We knew it could be done in two dimensions quite happily but this was the first time it had been tried in three dimensions. After we had worked out how we were going to do it, we had sample pieces made up and tried to standardise as many of the components as we could. We created bespoke sheets to fill the gaps.

Another issue was to avoid creating any flat spots on the roof. Because it curves in three dimensions, you could easily get a flat spot that might have affected the way rainwater flowed off the roof.

GC The interchange is located between two railway stations. In order to ensure the safe installation of the canopy that links the interchange with the neighbouring six platforms, and to minimise disturbance to the public, work took place overnight and at weekends whenever possible. The roof’s acoustic liner required more than 12,000 fastenings into 10mm structural steel. Owing to the scale of the project, we knew conventional fixing methods would lead to time delays. Instead we used Hilti shot-firing technology, which can fasten long-span decks and liner trays to structural steel at a rate of 10 fixings in 10 seconds.

Q. Why was Kalzip used for this project?

NB We have used it on a number of projects and knew it could be bent to a tight radius and was flexible enough for the curved form of roof we wanted to create. It is also made from recycled aluminium.

GC Kalzip offered both the functionality and the aesthetics that the architects and client wanted. It also had a track record for quality and came with guarantees.

Q. Were there any design compromises?

NB No, we’d done so much work up front that we knew we could do it.

GC The final incarnation is pretty much exactly like the original design.

Q. What do you think of the finished project?

NB It was a really successful outcome. The roof is dramatic on the outside as well as the inside, where you can look up and see the way it climbs and twists.

GC It looks fantastic. We’ve just had the 12-month defects report back and there was only one remedial for the roof, which is pretty phenomenal.