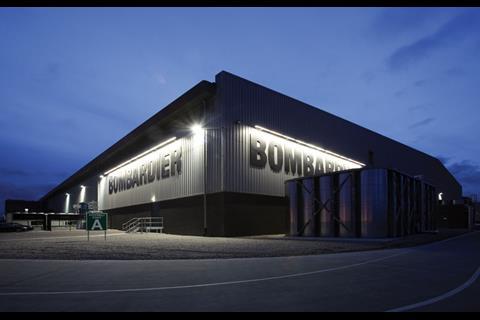 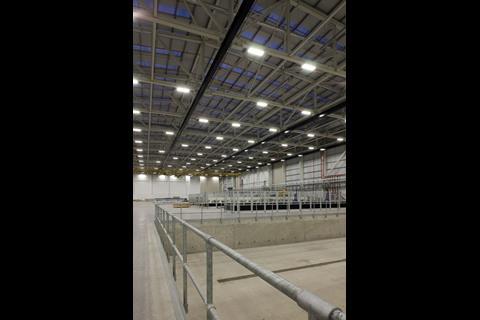 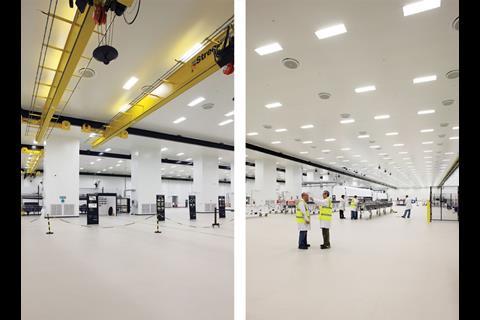 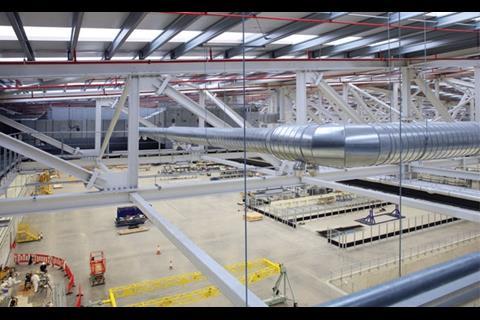 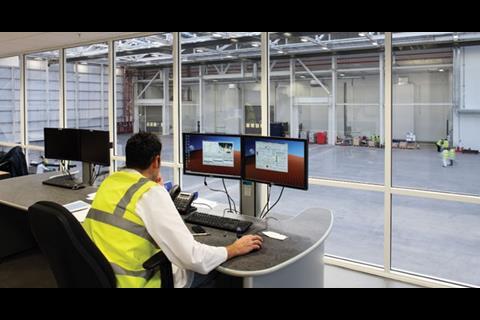 Air traffic gridlock over the holidays might have put you off flying for life. But Bombardier is launching a new plane with high-tech carbon fibre wings - first, though, it needed a factory that could be designed in tandem with those wings

A lot of hope is riding on a big grey box on the north-eastern fringes of Belfast. Just completed, this is a factory where the wings for what has been billed as a quantum leap forward in medium-sized passenger aircraft will be manufactured. Train and plane maker Bombardier is hoping to break into a market dominated by the Boeing 737 and Airbus A320 with a fleet it claims will be 15% cheaper to run. The C Series will achieve this, it says, with ultra-efficient engines and an advanced airframe that includes hi-tech carbon fibre wings.

Bombardier will launch the plane in 2013, but is already producing wings for testing it. According to Harry Lockhart, C Series project manager at Bombardier Aerospace, getting the plane to market as quickly as possible is vital for the success of this venture. “It’s all about market share,” he says. “Once we decided this was the route we were going to take, we put a peg in the sand saying this was the date it would go into service and worked back from that. You quickly realised this was going to be super-fast in terms of delivery.” That meant the factory had to be delivered very quickly - in just 17 months - and on time, ready for production to start in September last year.

Given the advanced nature and scale of the product, the £77m factory was always going to be special. It measures 600,000ft2, the size of four football pitches. Half this area is a giant clean room, as the wing components need to be made in highly controlled conditions. It is stuffed with plant to keep the air super-clean and within tight temperature and humidity tolerances.

Tight tolerances is a theme that runs through this project. Each half of the factory features a 64m span, with the roof structure supporting a crane running the length of the building - this structure is only allowed to deflect a minimal amount. The floor is super-flat and can only vary in height by 2.5mm over 600mm. 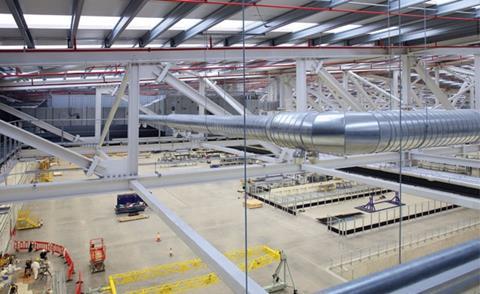 The tight programme also meant the factory had to be designed at the same time as the wings. The wing design determines the type of manufacturing equipment needed, which affects the design of the building. A good example is the autoclave, a giant oven used for curing whole wings in one go. Bombardier wanted an autoclave that closely matched the wing size otherwise it would be paying big money for autoclave space it didn’t need. The size of the autoclave determines the size of the foundations and the size of the pit it fits into.

The only way to deliver a project of this nature was tight organisation and planning. This is where Bombardier brought its manufacturing experience to the process. It produces its planes using lean manufacture. Essentially, this aims to drive all waste out of the process by making it as efficient as possible. The key is understanding the process and anticipating any problems in advance. Any issues that do crop up are tackled immediately before they balloon out of control. The factory is a column-free space so the production supervisors can see the entire production area from their control tower-type office, so if they see components building up in one area, they can sort it out before it causes problems down the line.

Bombardier insisted the project team was co-located on site. It also insisted on a formal meeting structure to plan the project and tackle any problems as these arose. Strategic planning was dealt with in a weekly meeting attended by the project leaders from the client, design team, project manager Turner & Townsend and contractor John Sisk. Problems and day-to-day planning were dealt with at daily meetings, attended by senior project team members when necessary. If these couldn’t be sorted out, the problem would go to Bombardier’s senior management in the Belfast head office and ultimately to the firm’s head office in Montreal. “By 10am it will be with the Belfast leadership team and it can be in Canada by lunchtime,” explains Lockhart.

Precision engineering
How did the team manage to design the building in tandem with the wings? The key was to find out from the manufacturing plant vendors what was needed from the building for the equipment to work properly. The project team sent out the structural engineer to spend time with the vendors and understand the requirements. “This wasn’t going to work on email - you have to go there and talk engineer to engineer,” says Martin Breheny, project director for Turner & Townsend Project Management. He adds that the team wouldn’t necessarily go along with what the vendors wanted. For example, high bay racking is used to store wing components and as a result is very heavy. “Sometimes it was a case of challenging the requirements. You could make the whole floor take the loads, but that would be too expensive. It was better to determine where the feet of the racking were going to be and put a pile under it rather than piling for the whole floor.”

Despite close collaboration with client and vendors, inevitably there were going to be last minute changes to the design as the building was constructed. Again a rigorous process was put in place to manage this process so costs didn’t spiral out of control. “We always see change control as like managing credit card debt; you don’t want to wait until the end of the month when you get the bill,” says Breheny.

The change management process went like this: if a change was requested, an impact statement was prepared, complete with cost and programme implications. This was reviewed by the team responsible for the C Series plane to see if it was really necessary. If the answer was yes, then more detailed costs would be worked up and reviewed by the C Series team and a cost control committee.

If the change made it through this process, then it would be implemented on site. Initially Joe McLoughlin, director of contractor John Sisk & Sons, was against this process as it appeared bureaucratic and time consuming. “I didn’t like it, as it is very often the possibility of a change and the discussions that go with it that bog down a job,” he says. But the process worked and McLoughlin confesses he is now a convert. 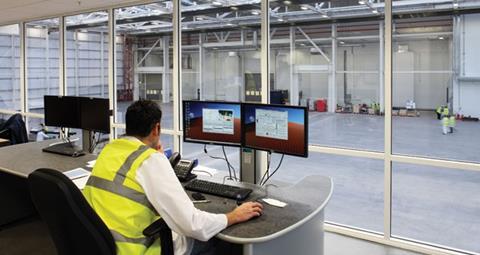 The team also had to deal with everyday construction risks that could potentially upset the programme. The strategic planning team identified the foundations and the weather as the main two risks. The precise tolerances and delicate nature of the manufacturing equipment meant the piles had to be rock solid. Unfortunately the ground was anything but. “It feels very solid when you walk on it but it’s just a crust; go down one metre and it’s just soup,” explains McLoughlin. Because the team knew the ground was bad they built some float into the programme in case of problems. As it turned out this time was needed as 50 piles failed the load capacity tests and had to be redone.

Because of concerns about the weather the team decided they wanted the steel frame up and the cladding on by Christmas 2009. To hit this date, the steelwork had to be ordered before the specification of the manufacturing equipment had been finalised. But the detailed specification of the roof-hung gantry cranes used for moving components around the factory wasn’t known yet. The team had to design for the maximum load to ensure there wouldn’t be problems later.

With the building watertight, work could begin on the floor. “We put a lot of thought into the floor,” explains McLoughlin. “We couldn’t do it in one big area and achieve the necessary tolerances, so we sacrificed speed to get the tolerances right.” The solution was a specially made screeding machine that could level a 16m-wide floor bay. It took six weeks to lay the floor.

The M&E installation also needed careful planning as a lot of plant was needed for the clean room area. Unusually, John Sisk ordered the plant to reduce the risk of problems obtaining it. “Normally the M&E contractor would place the order, but we did this to reduce the risk - we could order earlier and put less strain on the M&E contractor,” says McLoughlin. The air handling units are fixed in the 5m deep roofspace and had to be installed before the roof cladding, a process that needed a lot of co-ordination.

The building is now finished and people in white coats move around the vast, white space. Several wings have been already made for testing and once the design is finalised, the wings can go into full-scale production. The team have delivered the building successfully; it is now down to Bombardier to make a success of the C Series.