2
A comforting vision of L: KPMG in Canary Wharf
News

A comforting vision of L: KPMG in Canary Wharf 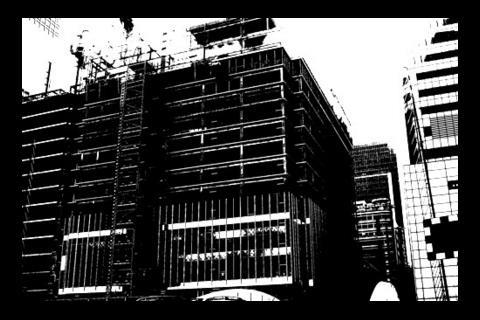 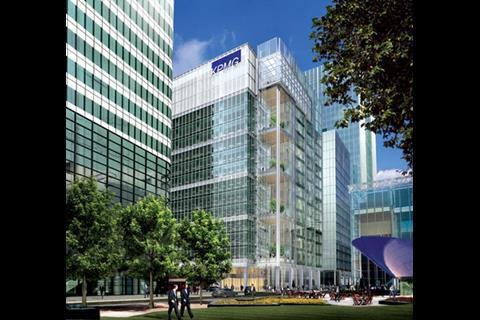 A visualisation of the finished building, which will occupy one of the last remaining sites around Canada Square. 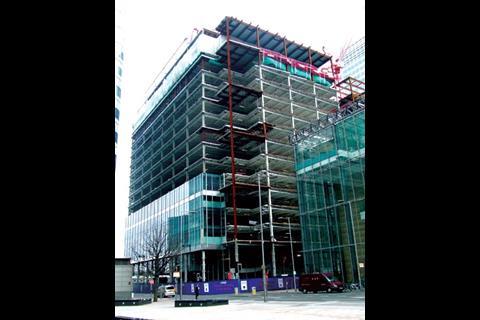 The KPMG building looks very ordinary despite its impressive environmental performance. Like other buildings at Canary Wharf it has a steel frame and glass cladding. 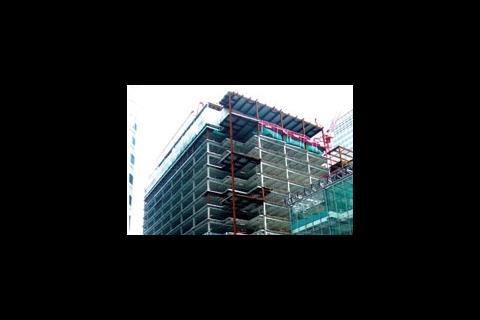 KPMG’s new building in Canary Wharf shows that comfortable, glass-clad offices and the CO2 emissions targets expected in the 2010 revision of Part L are not mutually exclusive.

On the gleaming, corporate skyline of Canary Wharf, the partially clad office block that’s taking shape on one of the last remaining sites around Canada Square doesn’t look out of the ordinary. The steel skeleton that has now topped out at the 14th floor is gradually being wrapped in familiar glass curtain walling. But number 15 Canada Square marks a turning point for the Canary Wharf Group (CWG), and is a glimpse of the future of Part L of the Building Regulations.

All of CWG’s developments must meet a BREEAM “Excellent” rating, but this building goes one step further. The client, accountancy firm KPMG, set itself a target of reducing carbon dioxide emissions by 50% from its new building compared with the requirements set out in the 2002 Part L. This is equivalent to constructing an office to what is likely to be the CO2 reduction target in the 2010 revision of Part L.

If this sounds challenging, the design teams had the added burden of ensuring that the building complied with Canary Wharf’s commercial office criteria – above those of the British Council of Offices – in terms of cooling loads, occupancy densities and air supplies, as well as making sure that it met market expectations in case the firm ever decided to sublet floors or sell it on. In other words, it needed to have solid commercial appeal, so couldn’t be too wacky.

The impetus for the tough environmental credentials came from KPMG, and is the toughest yet out of Canary Wharf’s 14 million ft2 portfolio, which includes 33 office buildings. “This was the first negotiation we were involved with where there were specific requirements for environmental issues,” says David Hodge, associate director of M&E at CWG. “It was very detailed and it had to be an integral part of the design, construction and operation of the building.” The 50% reduction in CO2 emissions wasn’t an arbitrary figure but had been worked out over six months with a number of bodies including BRE and the Carbon Trust to establish an achievable target in a changing legislative environment.

We could generate better performance by investing in the building services than by spending the money on the facade.

The design concept evolved over a number of months. CWG is responsible for the shell and core but KPMG will do its own fit-out. With the site largely determining the building’s footprint and orientation and a conventional structure of concrete cores with a steel frame, thoughts turned to the facade. According to Paul Katz, principal with architect Kohn Pedersen Fox, while a lot of buildings in Canary Wharf are very opaque and inward looking, KPMG wanted a transparent and open building, which translates as glass. A 14-storey atrium open to the office floors fronts the building, with mini three-storey stacked atriums at the corners.

Such heavily glazed facades don’t exactly cry out as energy efficient. In-depth studies were carried out to explore the potential of using a double-skinned facade with automated venting and external shading. “KPMG was very open to innovation as long as it delivered performance benefits and could be justified on cost grounds,” says Robert Phelan, project executive with CWG. It quickly became apparent that an active facade couldn’t. Compared with the high-performance double-glazed curtain walling, the improvement in terms of heat losses and gains of an active facade when balanced with cost was relatively low. “It was felt we could generate better performance by investing in the building services than by spending the money on the facade,” says Hodge.

If you’re expecting a building dotted with renewables, think again. Solar hot water heating and photovoltaics were both dismissed after a cost analysis. There simply wasn’t a business case; the solar thermal water system demonstrated a CO2 saving equivalent to 10 return flights to Berlin, something that could be more effectively achieved by introducing video conferencing.

The design team went back to basics and started analysing each system to see where improvements in energy efficiency could be found. The tradition for cooling offices at Canary Wharf over the years has been to install variable air volume (VAV) systems, which vary the amount of cooled air delivered to the space depending on the heat loads. The current Part L limits fan power, and VAV systems struggle to meet these requirements, so a switch to fan coil systems or active chilled beams has become the norm.

It’s the latter that KPMG has opted for. Fresh air will be delivered onto the office floors via the beams. This will induce the room air to circulate across the cooling coil in the beam, which effectively increases the cooling capacity of the beams. “Your main ventilation system fan power goes up slightly but you immediately eliminate all the fans in the terminal units that you would have had with a fan coil system,” says Hodge. “So you make an immediate saving and you can still get equivalent cooling capacities of fan coil units. The more even air distribution also allows for higher air temperature deliveries.”

Of the four buildings CWG is currently constructing, two use fan coil systems and two chilled beams. “A few years ago the perception of active chilled beams was not that great but we’ve now seen a shift in their use in high density offices,” he says.

The chilled water system employs more efficient water-cooled chillers rather than the air-cooled systems previously used for smaller developments by CWG. The design team also explored the idea of using the dock water as a source of cool water to raise the efficiency of the chillers further. The calculations eventually showed this wouldn’t be needed, which was something of a relief. “The proposal for constructing the Crossrail project is to drain the dock to construct the new station. If we had relied on that to achieve the targets it would have meant for the duration of the construction of Crossrail we wouldn’t have been able to use it.”

But by far the biggest contributor to CO2 reduction will be the installation of a trigeneration set (see box, opposite) as part of the shell and core construction. Under the Greater London Authority’s’s London Plan, trigeneration is being promoted as one of the technologies to meet the 20% target for on-site renewables. According to Hodge, the building already had planning approval in place and didn’t need to comply with the measures set down in the London Plan but the trigeneration kit made sense. Taking into account the expected usage and building loads it is expected to account for 9% of the 22% reduction in CO2 emissions beyond the current Part L requirements.

As the trigeneration plant is only efficient when it is working at 50% capacity or higher it has been sized to meet the building’s 24-hour base load. During the working day it will ramp up to meet the additional requirements such as cooling and small power items such as computers and printers. The waste heat will be fed back into the building’s heat system when there is a heating demand or else used to serve an absorption chiller.

Elsewhere, around a 5% saving is achieved with the lighting system. Daylight level and people movement sensors will ensure that the lighting on the office floors is switched off when it is not needed.

One of the green technologies that did make it through cost analysis was grey water recycling.

Although this doesn’t contribute directly to the building’s CO2 emissions it was one of KPMG’s targets. It is expected to cut water consumption by over 30% and the water distribution system in the building has been configured so that KPMG can install a grey water system at the fit-out stage. The WCs and urinals are fed from separate risers to the wash basins, which means they can easily be connected to the water treatment and recycling plant at basement level. Water meters at each floor will allow water reduction to be more easily targeted.

KPMG is aiming to occupy 15 Canada Square in the summer of 2010. The latest Part L assessment of the building, incorporating the detail fit-out design (see graph) shows that the CO2 emissions for the building should be 39.5kgCO2/m2 per year, a 44.3% reduction on the CO2 emissions over 2002 Part L. “This includes the fit-out with the daylight control and chilled beams and a rather conservative assessment of daylight linking,” says Hodge. “In reality there should be further improvements on this number.”

One area that will be targeted for improvement is the cooling system. Plans are being made to trial higher room temperatures of 25ÞC – based on the rule of thumb that allowing air temperatures to drift up by 1ÞC can result in energy savings of 6-8%. If there is no effect on occupant comfort this will be rolled out on each floor.

With the trigeneration system taken into account, the CO2 reduction rises to 54.6%, taking it beyond the proposed requirements for the 2010 regulations. Which all adds up to show that meeting the next round of Part L doesn’t mean radically redesigning office spaces, or reconsidering comfort levels.

What is it and does it deliver?

Trigeneration takes this a step further. Also known as combined cooling, heat and power, the waste heat that is generated is also used to provide chilled water for cooling by being passed through an absorption chiller. This is particularly appealing given that most office buildings have a year-round cooling load rather than a need for heating.

Trigeneration systems are now heavily promoted by the Greater London Authority as a way of reducing CO2 emissions and it is a requirement that such systems are considered in all submissions to the GLA as part of the energy statement required for new buildings and developments under the London Plan.

However in some quarters, question marks have been raised over the CO2 savings that CHP and trigeneration can deliver. In order to evaluate the benefits of generating electricity using a CHP system, a comparative figure must be given for the CO2 produced if the electricity had come from the grid. This is given as kg of CO2 per kWh of electricity. The argument is that the grid-displaced electricity factor given in the Building Regulations is significantly higher than the current average, which distorts the case for using CHP and trigeneration.