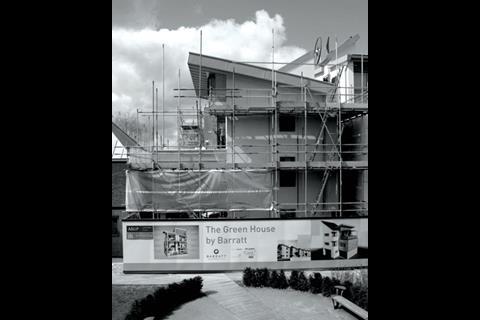 The Green House by Barratt is the second prototype at the BRE Innovation Park near Watford to meet level six of the Code for Sustainable Homes. 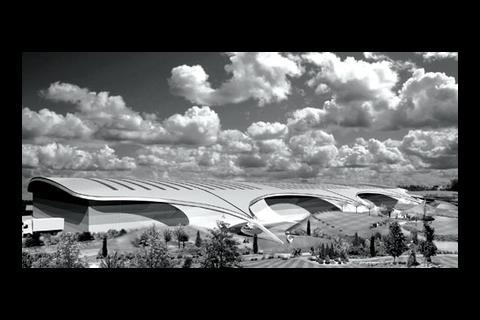 This was introduced last April and is intended to raise the sustainability of dwellings above the minimum standards set out in the Building Regulations for energy and water use. It also sets out minimum standards for surface water management, site waste management, household waste management and use of materials. The code has six levels, ranging from just above the minimum standards set out in the regs to a zero-carbon home that generates all its own power and consumes minimal water. It is currently a voluntary standard –except for new social housing developments, which must meet level three from this April. This means they must emit 25% less carbon than is required by Part L. Also all new homes must be rated against the code from 1 May. Housebuilders aren’t required to run their homes through the formal assessment process, but if they choose not to, the homes will receive a zero rating. Future Building Regulations will be based on the levels in the code: the 2010 version of Part L will be based on level three, the 2013 version will require 44% lower carbon emissions than now and the 2016 version will require the home to be zero carbon.

The government has also announced that it wants all homes to be built to Lifetimes Homes standards from 2013; this will be incorporated into the code.

Read about the first level-five homes in 'Deep in leafy Surrey'.

This enables local authorities to demand that a percentage of a building’s energy is generated using on-site renewables as a condition of planning. The application of this varies across the UK – typically local authorities demand 10% but some authorities, including those under the remit of the recently revised London Plan, are demanding as much as 20%.

The requirement to get an energy certificate before selling or renting a building is being extended in phases from existing homes to all buildings that have a heating or cooling system. The energy performance of the building fabric needs to be assessed by an inspector and given an energy rating on an A-G scale. Since 6 April buildings over 10,000m2 have needed a certificate once constructed, sold or let. Buildings with a floor area over 2,500m2 will be introduced to the scheme from 1 July, and all other non-dwellings from 1 October.

Recently the government announced that building owners will not need to get an EPC for buildings that have been marketed before the start date until October, unless they are sold or rented before then.

Buildings over 1,000m2 occupied by local and central government will also need to display a certificate showing how much energy is actually being used. This is called a display energy certificate and is based on the size of the energy bills.

From 6 April this year it became compulsory for contractors to prepare a site waste management plan for any construction project with an estimated cost over £300,000. Slightly different rules apply to jobs with a value over £500,000. The idea is that, by becoming aware of how much waste is being produced, contractors will then take steps to minimise and reduce it. A person is made responsible for firstly estimating, then recording how much waste is produced and recycled during the job. The plan must be regularly updated and lessons learnt as the job proceeds recorded.

For more details refer to 'Waste and how to tame it'.

All other Building Regulations

There are currently no plans to revise any of the other Building Regulations. A consultation paper published in March proposes regulations should only be updated on a three-yearly basis, with most revised every two cycles, or six years. All the regulations would be revised at the same time. The idea is that this will bring much greater certainty to regulation, which in turn will lead to greater levels of compliance. The first date for revisions is likely to be 2010 when Part L is due to be revised.

How Building reformed the regs in 'The first battle is won'.

Developing a code for sustainable non-dwellings is far more challenging than for homes. For a start, there is a far greater diversity of building type.

Part L of the Building Regulations

The current version of Part L, which sets out energy standards for all types of building, came into force in April 2006 and is due to be revised in 2010 to keep it in line with the Code for Sustainable Homes. This means it will require 25% less carbon emissions from housing than the current version. There are no equivalent published emission rates set for non-dwellings although the government indicated in 2004 that it was minded to raise standards by 25% to 35%. It will probably be closer to 25%, which is the level called for in the UK Green Building Council’s report to the communities department on the feasibility of an equivalent to the Code for Sustainable Homes for non-dwellings.

The communities department says it will issue a consultation paper on 2010 Part L early in 2009. Unusually it will also consult on standards for the 2013 version of Part L covering homes at the same time, which means the industry will probably know the contents of 2013 Part L for homes as the 2010 version comes into force. Currently there are no plans to issue a revised Part L for non-dwellings in 2013 – the next revision could be in 2016, which is line with the government’s intention to only revise regulations on fixed dates. Hopefully these future revisions of Part L will be easier for the industry to cope with as the basic software-based calculation methods will stay the same.

The current definition of zero carbon in the Code for Sustainable Homes only allows energy for the home to be generated on site. Critics say this is inefficient and could make it impossible to deliver zero-carbon non-dwellings, which often have much higher power requirements than homes. The government plans to publish a consultation this summer on the definition of zero carbon with the aim of coming up with a formal definition by the end of this year.

Part G of the Building Regulations

This currently covers hygiene but is set to cover water efficiency and safety too. A consultation paper is due to be published in May. It will include the levels of water efficiency set out in a consultation jointly published in December 2006 by the communities department and Defra. This set out levels of water use in both homes and the workplace. Mechanisms being considered for non-dwellings include setting a limit on water use per employee per day and setting standards for water fittings. A whole building performance standard is being considered for homes. The final level is likely to be just below level one of the Code for Sustainable Homes, which is set at 120 litres of water per person per day. The consultation also includes proposals to make thermostatic valves and mixer taps compulsory for baths to reduce the risk of being scalded by hot water.

With the Code for Sustainable Homes in place, attention is being turned to an equivalent for all other types of buildings. When the UK Green Building Council (UKGBC) was asked by the communities department to assess the feasibility of making non-dwellings zero carbon, it concluded that, if a similar timescale was adopted to homes, which have to be zero carbon by 2016, they could be zero carbon by 2020. However, chancellor Alistair Darling announced in the Budget that all buildings must be zero carbon by 2019.

Developing a code for sustainable non-dwellings is far more challenging than for homes. For a start, there is a far greater diversity of building type, and many of these, such as offices and factories, use much more power than homes. The UKGBC report concluded that off-site renewables will be needed to power these buildings. It also concluded the increase in cost of making non-dwellings zero carbon could range from 5% to 30%.

The next stage is a formal consultation on a Code for Sustainable Non-dwellings, which should be published in June, at the same time as the consultation on the definition of zero carbon.

The tools for assessing the sustainability of non-dwellings are being honed in expectation of a code. BRE tool EcoHomes has been used as the assessment tool for the Code for Sustainable Homes.

Its non-dwelling equivalent, BREEAM, has just been given formal backing by the UKGBC and is being radically revised, presumably because BRE sees BREEAM as a potential assessment tool for non-dwellings. The revised BREEAM will look much more like the Code for Sustainable Homes – for example, for the first time it incorporates minimum standards for energy and water use.

More on the UKGBC report in 'The Code for Sustainable Non-dwellings'.