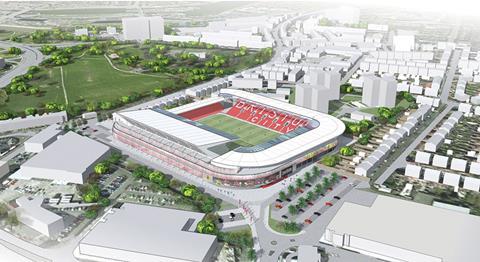 Bristol Sport, which owns the Ashton Gate Stadium, announced today that the Paisley-based contractor will carry out the project that will expand the ground’s capacity from 21,500 to 27,000 seats.

The scheme consists of a three phases.

Barr will commence work on the first phase next month, which will see the complete rebuild of the existing 86 year-old Wedlock Stand with new conference facilities, administration offices, cafes and shops.

The entire project is expected to be completed in two years.

Barr managing director Barclay Chalmers said that the company would work with the local supply chain wherever possible.

The company has worked on approximately 5 sports projects before including new stadia for Southampton FC, Celtic FC and the London Olympics’ Basketball Arena. Building also recently revealed that Barr has been picked as the contractor on the redevelopment of the Warner Stand at Lord’s cricket ground.