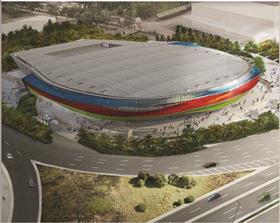 Architect Broadway Malyan is facing a claim for nearly £300,000 from a subcontractor for work on its National Gymnastics Arena in Baku, Azerbaijan.

Papers filed in the High Court state that architect Pattern Design was contracted to provide design work for the arena in April 2011 agreeing to be paid in stages that were based on the RIBA stages of design process.

It then provided design work up until December 2011 when project manager Mace informed Broadway Malyan that the client had changed the brief for the project from a 6,000 seat arena to a 9,000 seater. The 6,000 seat arena had originally formed a key part of Baku’s bid to host the 2016 Olympics and the revised 9,000 seater will now play a role in its bid for the 2024 Olympics.

Broadway Malyan asked subcontractors in the design team to put work “on hold until we can finalise a revised brief”.

At this point Pattern claims it was entitled to payment for work undertaken so far on the arena design but Broadway Malyan departed from the original stage payment agreement and instead sought to measure the level of completion of the work.

It also alleges that Broadway Malyan never provided a revised brief and the stop in activity left it incurring substantial staff costs because it was not able to redeploy staff onto other projects.

The architect also claims that Broadway Malyan has passed off work as having Pattern Design’s involvement after it stopped working on the project.

The papers filed in the High Court said: “The defendant has, further, unlawfully continued to use the claimant’s name on the title block of all relevant drawings notwithstanding repudiation of the sub-consultancy agreement so wrongly representing that the claimant has issued and/or reviewed the drawings.”

A spokesperson for Broadway Malyan said: “As a large global practice involved with complex multi-party projects, Broadway Malyan is occasionally involved in disputes and, while its first approach is always to find an amicable and confidential resolution, at times the practice is forced to enter into litigation as, in this case, which has been initiated by Pattern Design. The practice is unable to comment on specific matters which are the subject of litigation.”