Carillion subcontractors on the hook for £1bn 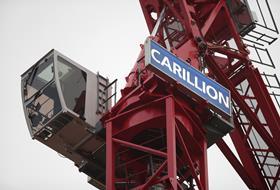 Warnings are growing that a host of firms face ruin with some estimating that collapsed Carillion owes its suppliers an eye-watering £1bn.

The chief executive of the Specialist Engineering Contractors’ Group said Carillion’s supply chain was owed at least £1bn in progress payments before Christmas – with that figure having headed north since then.

Rudi Klein told Building: “We based our estimate on an analysis of Carillion’s accounts. Carillion was identified as the worst of the top 10 contractors in terms of what’s owed to the supply chain.”

Klein said the government has asked the group to report back this week on what his members are owed by Carillion.

But he warned firms would go under in a matter of weeks as a result of Carillion’s demise. “Firms are only two or three progress payments away from going down. If there’s an interruption to the flow of payments it could be a matter of four to six weeks before we see some fatalities.

“In my 30 years in construction I have never witnessed anything as bad, given the degree of outsourcing that went on at Carillion. This affects thousands of firms.

“Potentially this could lead to fatalities among smaller suppliers, and even possibly some bigger firms. It’s the engineering firms that are most exposed because of the high value of their work.”

Earlier today David Lidington, minister for the Cabinet Office, who has overall responsibility for procurement, tried to reassure Carillion staff and suppliers over getting paid. “We will continue to maintain partnerships with responsible firms in future,” he said.

But Klein said: “We are desperately seeking clarification on this point. To what extent will the government look after suppliers? What does that entail? What about outstanding payments? There’s a lot of cash built up there. Does that include retentions?”

Five years ago, Building revealed that the firm had extended its payment terms to 120 days and is implementing “reverse factoring”, a financial mechanism that allows suppliers to be paid early if they pay a charge to the bank.

Rudi Klein, the head of Specialist Engineering Contractors’, said the group had recently calculated that Carillion owed subcontractors and other suppliers up to £1bn.

And Mike Cherry, the chairman of the Federation of Small Businesses, warned: “It is vital that Carillion’s small business suppliers are paid what they are owed, or some of those firms could themselves be put in jeopardy, putting even more jobs at risk besides those of Carillion’s own employees.”

Meanwhile, accountancy firm PwC has confirmed that the High Court has appointed the Official Receiver as liquidator for Carillion.

In a statement, it sad that would be “exploring any potential sale of the businesses and assets in whole or part”.

It added: “Unless told otherwise, all employees, agents and subcontractors are being asked to continue to work as normal and they will be paid for the work they do during the liquidations.”

But it said that Carillion’s investors have been wiped out. “Unfortunately, as a result of the liquidation appointments, there is no prospect of any return to shareholders.”

The Companies are continuing to trade.

Unless advised otherwise, all agents, subcontractors and suppliers should continue to work and provide goods and services as normal, under their existing contracts, terms and conditions.

You will get paid for goods and services you supply from the date of the Official Receiver’s appointment onwards. Over the coming days we will review supplier contracts and we’ll contact you concerning these soon.  Goods and services you supply during the liquidation will be paid for. A letter will be sent to suppliers shortly containing further instructions. In the first instance, please speak to your usual contact at the Companies.  Matters requiring the specific attention of the Special Managers can be sent to:

In your email please state your name, your company name, the name of your usual contact at the group and any other information you think will be useful. This will allow us to answer your query as quickly as possibly.

Your co-operation will allow the Companies to continue trading with minimal disruption.