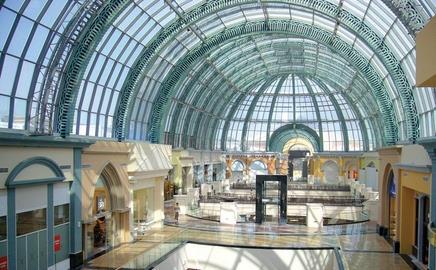 It’s big, brash and possibly the way of the future – Mott MacDonald's David Mercer gives an insider’s view of how Dubai does retail

When I first went out there 10 years ago, Dubai was like a small town; now it’s developed into an extensive tourist destination and business centre for the Gulf region. Retail is a big part of that. Pretty much all of their projects are large, but the retail projects are vast. I worked on the Mall of the Emirates, which opened in September 2005 and is still the largest retail development in the world outside North America. The client was Majid Al Futtaim Group, a Dubai-based developer/owner, and they wanted to make it a “five star” development.

Malls in the Middle East are a real experience. They’re not just about retail, they’re places for everybody to enjoy, they draw you in and keep you there. A lot of retail developments include hotels and entertainment centres. You can go there for the day as a family, relax in the coffee shops, take in the environment and culture around you, enjoy the restaurants, do the weekly shop in Carrefour, go to Harvey Nichols … then there’s the Magic Planet, with rides and machines for teenagers to play on, and the Middle East’s first ever indoor ski slope where you can spend a few hours having skiing lessons. My two children learned to ski there, and I learned to snowboard. It’s a great day out the whole package in one area.

It’s not just the high-class brands, they have local more Arabic-style shops as well, selling rugs and things from other parts of the Middle East. The malls have a high quality of finish, and it’s themed with different designs from around the Arab world so you can take in some of the cultural experience as you meander around at your leisure.

Mott MacDonald was commissioned to carry out structural engineering, design and full-time site supervision at the Mall of the Emirates. We hadn’t worked on anything of that scale in the retail sector before. The project has 450 themed retail outlets and expands across a 800m long × 500m wide area. What first hits you is the 50m-span arched steel roof structure over the central mall. You get quite taken aback by the vast internal volume and natural light provided by its ornamental appearance and structural form.

This “wow factor” then continues with the themed shopfronts and entry into the ski centre.

The success of this development involved a lot of interaction from the client in decision making. Clients are very decisive in the Middle East they make quick decisions and then set an aggressive construction programme. With support from the local authorities, outline planning approvals can generally take about three months to achieve.

You can go the mall of the emirates for
the day, relax in the coffee shops, ski …

Once outline planning has been approved you can in some cases submit packages such as foundations for final building approval while still designing the superstructure. This allows an early start on site and a focus for both the client and consultants on completing the design ahead of the construction sequences. The Mall of the Emirates took eight-and-a-half months to design and 24 months to construct.

Because of the vast scale of these projects, a huge labour force is required during the construction phase on the Mall of the Emirates it peaked at 4,500 on site. It was a very tight programme. We made it work by having the consultants’ team, the clients’ team and the project management teams together on site in one office. It would have been a lot more difficult if we hadn’t been working face to face with each other.

We looked at where we could save time and cost, which resulted in adopting mass concrete foundations where the normal trend in the Middle East is to pile we saved about two months off the substructure programme by doing that.

In the UK, sustainability is one of the key issues on developments. The Middle East is now developing a sustainability profile and we’re working on developing green building guidelines for Abu Dhabi’s Environment Agency, but it’s generally still at the early stages when compared with the UK.

Now I’m back in Britain, but I’m still working on Middle East projects. The great thing about working on retail developments in the Gulf is you feel a sense of achievement in bringing something to the community, for not only residents but tourists as well to come and see. Bahrain city centre is due to finish in November 2008 and I will definitely be going back with my family to visit.