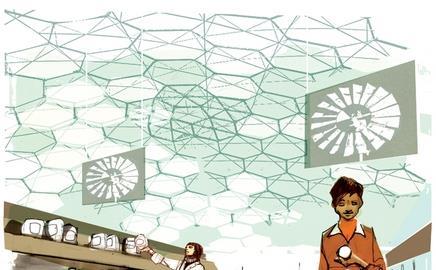 Some of the UK’s largest retailers are introducing fabulous new ranges of sustainable building practices. Eleanor Harding finds out what four of the biggest stores are doing differently and what this means for their suppliers.

Low energy this and carbon footprint that these days Britain’s supermarkets are almost as keen on trumpeting their eco credentials as their latest price cuts. As public perception of retailers plummets to an all-time low, their efforts to convince us that they’re a good thing have gone into overdrive.

Building conducted a straw poll of sustainability experts and compiled a list of the retailers that appear to be doing most to pioneer greener stores. Then we quizzed the stores themselves for the details behind the greenwash – how exactly they’re changing the way they build and what this means for the construction firms who work for them. Are they making sustainability work or is it just a loss leader to draw the crowds?

Everyone thinks Tesco is winning the PR war, but what’s it really doing differently? Sainsbury’s built that eco-store in Greenwich but what has it done since? Asda is bound by the zero-carbon pledge of its US parent Walmart, and John Lewis has brought in sustainability guidelines for its planned expansion of Waitrose stores. The only pioneer missing here is Marks & Spencer, with its Plan A sustainability regime, but we’ll take a look at its newly refurbished Bournemouth store.

Over the next five years, Tesco says it will spend more than £50m on low-carbon technologies to reduce greenhouse gas emissions. It has also dedicated a £100m fund to developing green energy resources such as wind turbines, solar panels and gasification.

As part of this, the retailer is working with Brunel University and the Carbon Trust to develop trigeneration combined heat and power (CHP) technology for stores and distribution centres. In doing so it hopes to save over 10,000 tonnes of CO2. The units help to capture and re-use heat created through power generation.

Recycling is also big at Tesco, and this could have implications for its suppliers. Since 2005, the store has been installing automated recycling units, which sort the waste into plastic, metal and glass so customers don’t have to. By February 2008, Tesco wants the units at 106 stores; an investment of more than £15m this year.

The retailer has already installed low-energy fans, timers on lights and high-efficiency refrigeration in its existing stores in order to save energy. It has also pioneered the latest new-age technology in model environmental stores at Diss in Norfolk, Swansea, Wick in the Highlands, and Shrewsbury.

The Wick store paints a good picture of what they’re up to. Technology there has included roof-top rainwater collection for bathrooms, timber frames and renewable power such as wind turbines and solar panels to power the tills. The refrigerators are water-cooled, featuring energy-saving LED lighting. There is also a cold air retrieval system to move cold air away from the refrigerators, to cool the store rooms.

As with the other retailers, innovation is a key deal-maker for Tesco. It says it will consider opportunities for direct investment, to make sure that firms with promising technology get the capital they need.

There are also opportunities for subcontractors interested in green technology. The store is also complaining there are not enough technicians skilled to work on low-carbon technology, meaning it is now training environmental engineers, maintenance technicians and energy “champions” in its stores.

The model green stores in Diss, Swansea, Wick and Shrewsbury.

Construction practices play a strong part in Sainsbury’s’ green development campaign. The company has built a consolidation and recycling centre west of London, where construction waste is sorted and recycled. Building materials and equipment are grouped together for delivery, cutting down the number of vehicles on the road and the emissions they produce.

At its Frome store in Somerset, it’s making use of off-site manufacture. Many components, such as the back walls of the delicatessen areas and restaurants, are now built in factories before being shipped to site, cutting down on emissions both in production and delivery. The Frome store was built in just over a third of the usual time.

Since opening its green flagship store in Greenwich in 1999, Sainsbury’s has been trying to replicate some of its pioneering technology across the board. It has spent £15m on energy efficiency projects in existing stores since 2002. Moreover, a new, more efficient depot opened in Northampton in September, which capitalised on natural light and on-site energy production, in the form of a heat and power plant. Rainwater harvesting facilities reduce its mains water usage by 50%.

Renewable energy is big, with wind turbines, solar panels and combined heat and power plants all appearing across the estate. Energy-efficient lighting is being installed too, including skylights and passive infrared technology to switch off lights when there is nobody in a room. In terms of heating and ventilation, there are building management systems (BMS) to prevent overheating and overcooling, as well as free air cooling systems, variable speed drives and better building sealing to retain heated or cooled air.

In bathrooms and toilets, water-saving technology is being tested. Rain harvesting is now standard for all new buildings, and in its store support centre in Holborn, central London, it has reduced urinal flushing with a non-hazardous micro-biological system.

The buzz from Sainsbury’s is that ideas are the most important thing a supplier can offer. If your business can come up with practical cutting-edge solutions for renewable energy, carbon reduction and water saving, you might just find yourself on Team Sainsbury’s. Make sure you have accreditation from a recognised environmental management system, such as ISO14001 – Sainsbury’s requires it from all of its suppliers by March 2008.

Asda is building its “greenest store ever” in Bootle, Merseyside. It incorporates all the latest in eco-technology, including wind turbines, solar panels, ground source heat pumps, timber frames and cladding, sunpipes, a biomass boiler, and efficient glass-front fridges.

Meanwhile, a timber-frame store is being built in Shaw, Oldham. It’s using timber instead of steel, as the production of steel emits more carbon.

It will also have a new ventilation system, reducing the need for air conditioning, and north lights on the roof will let in light but not heat. More eco-stores are being planned the next development will be in Glenrothes, Fife.

Asda is going all out on renewable energy. Planning applications have been submitted to construct wind turbines to power six depots across the UK. It believes the wind turbines, if granted planning permission, will generate 2.2mW of power – enough to power 1,100 homes.

In terms of energy efficiency, the company is going for north-facing skylights and efficient glass-front fridges.

The message from Asda is to keep your building practices sustainable. As a pioneer of green technology, it’s also open to new ideas and innovation.

John Lewis has plans for 10 new department stores in the next 10 years, as well as a big building plan for Waitrose. The retailer brought in new building guidelines in its February 2007 sustainability policy, meaning new stores will be more energy-efficient and environment-friendly. They are also implementing the guidelines in old stores such as Cambridge and Liverpool. Following case studies at John Lewis Trafford and Waitrose Lichfield, it has also introduced guidelines to increase recycling and reduce waste.

All supermarkets, department stores, distribution centres and offices are supplied by EDF Energy, which uses 100% renewable sources such as wind and hydroelectricity. The retailer is also looking to forge long-term supply contracts with wind farms.

However, the company stresses it focuses more on energy efficiency than renewable sources. It says it doesn’t want to “showboat”, and will not install features such as solar panels that it sees as ineffective and not economically viable. Instead, John Lewis is pushing innovations like high-efficiency lighting and variable speed drives on handling units, which slow down speed and save energy. It is also installing more efficient refrigeration and freezer systems and updating its BMS systems, which control the timing of lighting and temperature.

Despite the partnership’s distaste for showboating, it has introduced solar panels and turbines at its Leckford Estate farm in Hampshire where it rears free-range poultry. The chickens shelter in 40 acres of short rotation coppice, which can later be turned into wood fuel.

John Lewis wants 20% of all construction materials to be from recycled sources, and is aiming for 25%. It also encourages (although doesn’t force) all suppliers to sort their waste and recycle it. The main message going out is that suppliers should be as energy-efficient and environmentally-friendly as possible; for ideas, turn to those sustainable development guidelines, published this year.

A shed in Milton Keynes.