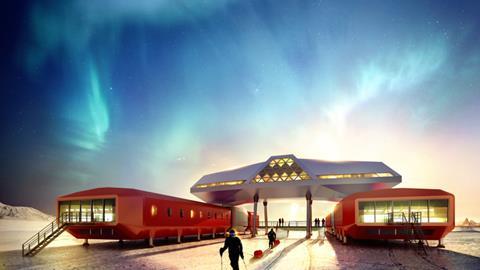 A British-South Korean consortium have released the first image of their design for the Korean Antarctic Research Station, to be called Jang Bogo Station.

The consortium is led by Samsung Construction and including Hugh Broughton Architects, Samoo Architects and Engineers and Galliford Try International.

The design will now be judged alongside a competing entry from a team led by Hyundai Construction.

The new base has been designed for the Korean Polar Research Institute (KOPRI), for a site on Terra Nova Bay and will be the second Korean station in Antarctica. KOPRI’s other station, King Sejong, is on King George Island in the South Shetland Islands.

The new station will provide accommodation for 16 people in the winter and 60 in the summer.

The exposed site is buffeted by winds, which often exceed 150 kph with temperatures in winter dropping as low as ‐35 degrees centigrade.

This is the third Antarctic Research Station on which Hugh Broughton Architects have worked.

In 2005 Hugh Broughton Architects and AECOM won the RIBA International Competition to design Halley VI for the British Antarctic Survey, which is now being built on the Brunt Ice Shelf by Galliford Try International and is due for completion in 2012.

The same design team also won the competition to design Juan Carlos 1, the Spanish Antarctic Station on Livingstone Island, which is also under construction.