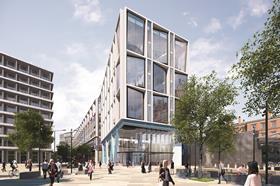 The UK’s top consultants are preparing a mass recruitment drive as engineers, architects and quantity surveyors hail a significant recovery in trading conditions following five years in the doldrums.

Fee incomes have risen almost 6.5% over the past year with chartered staff employment up by around the same proportion and signs of improving profit margins, according to Building’s 2013 Top 200 Consultants survey.

Engineering and environmental consultant URS said it is now expecting to recruit a total of 500 people in the UK this year and 700 in 2014, while close rival Aecom – which employs more than 50% of its European staff in the UK – said this week that it will hire 3,000 across the EMEA region in the next two to three years.

Just two years ago, AHMM was ranked 16th in the survey for number of UK chartered architects but has now leapfrogged Capita and Aedas to be ranked fourth.

Andy von Bradsky, chairman of PRP Architects, said the firm had taken on more than 30 staff so far this year “as the private housing sector returns to life and confidence grows”. “We are cautiously optimistic about the future,” he said.

Jim Eyre, director of Wilkinson Eyre Architects, said the firm has taken on 14 new staff in recent months. “We continue to look for talented architects to join the team at this incredibly exciting time,” he added.

He said: “I’ve been hearing people talking about a recovery for the last few months and I’ve been very cautious. But now, we’re seeing a big shift in the workload and we – like the companies we are supporting – are growing.”

Richard Gelder, UK property director at construction recruitment firm Hays, said: “When we did our last salary survey in April, 63% of firms were positive about the future. I think if you did that today, you would get more like 90%.”