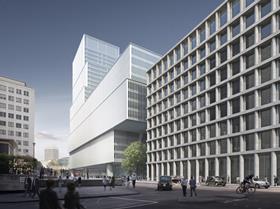 The government has decided not to call in the £600m Elizabeth House development near Waterloo Station.

A letter sent by the Department for Communities and Local Government to Lambeth Council, seen by Building’s sister title Property Week, states the secretary of state has “decided the application should be determined at local level, and has not called it in”.

The decision means Lambeth council’s decision to approve the scheme in November will stand.

The scheme, designed by David Chipperfield Architects, is comprised of two buildings of 11 and 29 storeys high, containing office accommodation, 142 homes and retail space.

The joint owners of the scheme are Chelsfield and London & Regional Properties and the quantity surveyor is Davis Langdon.

The existing 1960s building sits between The Shell Centre and the former Eurostar terminal at Waterloo.