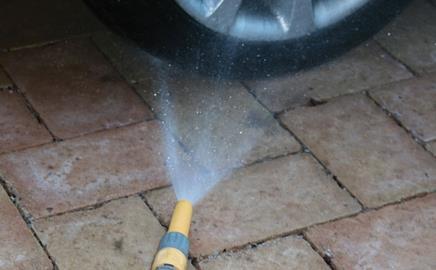 With a shortage of parking space, homeowners are increasingly paving over their front gardens. Peter Caplehorn gives advice to designers on how to do the job properly

Car ownership has been growing steadily since the Second World War, but in recent years the rate of this growth has increased markedly. From 1990 to 2004, the number of cars per 1,000 people rose from 360 to 460. This not only puts pressure on the roads, but also on parking. Where it was once possible for most to park on the road outside their homes, parking on site has increasingly become part of the planning system to reduce road congestion, especially in urban areas.

However, much of the recent flooding in the UK has been put down to heavy rainfall in relatively short periods combined with the inability of drains to cope with the volume of water resulting in a backlog and flooding.

While the run-off from a few front gardens that have been paved over to create parking areas might not seem drastic, the cumulative effect is seen as a cause of increased risk of flooding. As a result, on 1 October this year regulations under the Planning Act were introduced that mean changes to the front garden of a home for parking are now subject to certain controls. Planning consent is not required if the parking area is covered in porous material or the rainwater is drained to another part of the site and allowed to drain naturally within that site. This is, of course, assuming the building is not listed or in a conservation area. Additionally, more than 5m2 of impermeable material also requires planning permission. So what are the options open to designers?

Porous gravel or shingle is the simplest material to use. It is laid on a sub-base that should be compacted to take the loads, but have enough granularity to allow water to drain through it freely. A degree of retention of the water is also desirable in the material, as it allows the water to seep out at a slower rate than during the rainstorm, reflecting a situation close to that occurring if the driveway was not installed.

Various types of sub-base material are available – typically type 3 or 4/20 are recommended – with a finish of gravel or shingle chosen primarily for their appearance. It is advisable to have at least some hard paving at entrances to the home and at the transition to the roadway.

As long as it allows free drainage of storm water, hard paving can be used – in the form of concrete or clay blocks with holes or a porous asphalt. Open voids across the surface of the material or around the edges of blocks will allow water to soak through. The sub-base should have a build-up of layers and include increasingly fine material towards the top. This slows the water transition and filters any contaminants that could drain into the ground water.

Hard finishes should also be laid to a minimum fall of 1 in 80 away from the house or other buildings. If this is impossible to achieve, a linear grating should be installed running to a soakaway.

Alternatively, the hard paving can be laid conventionally and the water drained away to a soakaway, but care should be taken not to cause a conflict with existing soakaways serving the house. Paving can be laid loose in the main, but it must have a fixed perimeter, usually consisting of a line of blocks fixed in place with a concrete base. Porous asphalt is another option.

If the parking required is simple in layout, a pair of wheelways can be laid with hardcore and permeable finish. However, this restricts the manoeuvring ability and may not be to everyone’s taste.

It is also worth considering contouring the area if space allows, to form a so-called rain garden away from the vehicle area. Common in many parts of the world, this is a depression designed to flood in periods of storms and encourages the remainder of the garden to drain into it. It can then trickle away over time, causing minimal impact to the surroundings.

It is possible to use a ground reinforcement product, such as plastic or concrete honeycombs, that allows water to pass freely through it and grass to grow through the holes, yet which is also strong enough to allow for vehicle movement and parking. This option is adequate for occasional use, but lack of light, heat and abrasion can limit the grass growth, to the point that ground reinforcement isn’t really viable for permanent parking spaces.

Most areas of increased paving in the front garden also involve the removal or reduction in the amount of vegetation and plants. This gives rise to two other significant effects: a reduction in the capacity of carbon dioxide absorption and in the cooling effect plants have in the summer. Less vegetation also impacts on insects and wildlife, which in turn degrades the balance of nature locally.

Any south-facing driveway should have a pergola or similar shading structure to replace lost planting by encouraging the growth of high-level plants with their environmental and shading benefits. This will cool the garden and indirectly the house, as well as shelter the car.

Changing the water table can also be a consequence of paving over the front garden. Any impermeable surface will effectively protect the subsoil from rainwater and may allow it to dry out, causing the water table to change. This can cause shrinkage that may affect foundations and lead to some degree of settlement. This is especially true of clay-soiled areas and has given insurance companies cause for alarm.