Housing project of the year 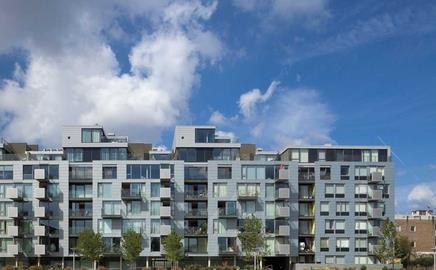 Pollard Thomas Edwards’ waterside development, which did wonders for a deprived area of London, has won top place in a remarkably strong field

The Regent’s Canal through Islington was once one of London’s main arteries, linking the docks with the Grand Junction canal. But for much of the past century it has been more of a backwater, hidden from view behind a series of dilapidated warehouses. The elegant apartments and public spaces of Angel Waterside have breathed new life into the canal’s City Road basin, and made it a focal point for this part of town. That it is also a commercially successful residential scheme in the midst of the worst housing downturn in decades, is another reason that it’s a worthy recipient of this award. Unusually, perhaps, it owes its commercial success in large part to its architect. When the contractors’ tender returns came in over budget, Pollard Thomas Edwards architects combined with developer Groveworld to act as main contractor, managing all the trade packages for an ultimate build cost of about £13.5m. PTEa also undertook detailed financial studies to work out the most efficient use of space, and found that multiple cores not only allowed it to design dual-aspect apartments with great views over the canal, but also gave more saleable space than traditional double-banked corridors. The result is an impressive example of urban regeneration.

Located between a village street and a park on the edge of Hounslow, PCKO Architects’ scheme had to reflect its traditional suburban surroundings and cheer up Londoners with its lively urban personality. It carried this off by mixing streetfronts, cladding materials and colours with an internal courtyard as the unifying factor. And it won the two great battles of today’s housebuilders: it sold well and its environmental credentials won an EcoHomes “very good” rating.

This scheme is a welcome addition to an area of west London where any newcomer has to live up to its listed neighbours. It succeeds by taking a serious approach to design throughout its nine buildings. The facade of the Make-designed Bramah House, for example, has an etched facade by artist Clare Woods that already feels like a west London landmark. It’s not all about the looks either: an enormous CHP and biomass boiler energy centre give it impeccable green credentials, too.

A development that has already become a byword for sustainable living, Crest Nicholson and BioRegional Quintain’s One Brighton fits seamlessly into its surroundings – no mean feat for a 10-storey tower in such an eco and design-conscious place. It has “excellent” BREEAM rating, is 31% affordable and comes from Stirling prizewinner Feilden Clegg Bradley’s top drawer. They’ll be putting it on the postcards soon.

Commuter towns like Basingstoke have always been vulnerable to sprawl, which makes the innovative approach to design on this scheme all the more refreshing. Timber cladding and a piazza-style layout feature, but perhaps most significantly, Pinnacle has the first “ordinary” home built to level six of the Code. One day, all houses will be built this way.

This is a superb reworking of a redundant seventies concrete-frame office building. The dull brown brick-clad structure has been transformed into a dramatic glass and timber apartment block that does justice to the spectacular views over Edinburgh that the site affords. And it’s so much more sustainable than demolishing the existing building and starting from scratch …

This Countryside Properties scheme originated in the government’s £60,000 house competition and shows what can be done with an ingenious approach to offsite elements. PCKO Architects has come up with three house types that use the same core concept, but with different internal characteristics and a variety of frontages. The affordability ethos extends to tenure: the affordable homes are indistinguishable in terms of design quality and amenities from the private ones.

The architectural icon is not dead – it has just moved to Ipswich. This development of 327 apartments dominates the Suffolk town’s waterfront and is a symbol of the docks’ regeneration. Its staggered cascade of towers, from 23 to eight storeys, has a playful mix of render and red and yellow panels that can be seen from miles. It’s a confident statement, and definitely something to sing and dance about – which is just as well as it has one of the country’s best dance studios in its lower three floors.