Contractor will build the new Arts and Humanities facility 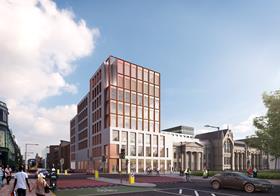 Morgan Sindall has won a contract from Manchester Metropolitan University to build its new flagship £46m Arts and Humanities building.

It will also house a new Poetry Library alongside the Manchester Writing School.

Designed by Allies and Morrison, the seven-storey block is at the heart of a £110m investment in arts provision at the university and will replace the university’s Mabel Tylecote Building at the side of the grade II-listed Grosvenor Building – which was the original Manchester School of Art.

The building at the university’s All Saints campus is expected to complete in early 2020.

Morgan Sindall, which kicks off the upcoming reporting season for quoted contractors when it publishes its 2017 results on 22 February, has won a number of high-profile jobs in the north-west, including an office building for healthcare firm Bupa at Salford Quays as well as work on the Paddington Village project in Liverpool – a planned £1bn extension to the city’s Knowledge Quarter.