‘No cap’ on how much money needed to complete Carillion's Liverpool hospital, NAO admits

Scheme being finished by Laing O'Rourke under management contract

It is still not possible to say how work to finish the Liverpool hospital left stranded by Carillion when it went under two years ago will cost, a National Audit Office report has revealed.

As part of its investigation into the two PFI hospital jobs Carillion was carrying out, the public spending watchdog said there is still significant risk around the programme and cost of the Royal Liverpool hospital now being completed by Laing O’Rourke. 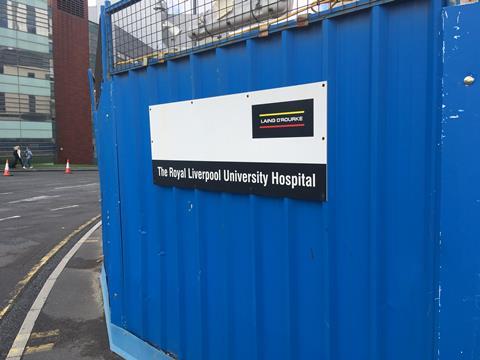 The job was originally due to have cost £350m but it has now gone up to at least £724m and the watchdog admitted: "There is no cap to the price of the remaining work, the scope of which is being finalised, and there are risks of further cost rises and time delays.

O'Rourke has inherited a number of problems on the scheme, including cracks in concrete structural beams, issues with ventilation in the operating theatres and non-compliant cladding having been fitted to the building.

As the managing contractor, Laing O’Rourke is responsible for identifying and rectifying issues with the hospital building and finalising the construction project by managing around 140 other contractors.

The NAO said the Liverpool University Hospitals NHS trust had worked with O’Rourke to re-engage as many of the original Carillion subcontractors as possible in order to maintain warranties for works already carried out.

The watchdog also said that while Balfour Beatty had agreed a target price to complete the other hospital Carillion was working on, the Midland Met, this did not mean there would be no further costs.

It said: "Balfour Beatty has agreed a target price for its work to complete the Midland Metropolitan, but the [Sandwell and West Birmingham Hospitals NHS] Trust may have to pay more for extra work caused by defects in Carillion’s work that could not have been foreseen during Balfour Beatty’s pre-contract due diligence."

Balfour Beatty has been carrying out early works at the site since autumn 2018.