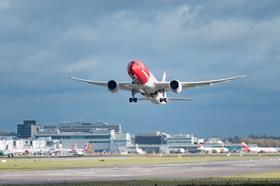 Vinci has bought a 50.01% stake in Gatwick for £2.9bn as the airport eyes up infrastructure expansion and higher passenger volumes.

The French multinational already runs a handful of smaller airports in Europe and the US but operations from these made up less than 0.5% of its €40.2bn (£36.2bn) revenue in 2017.

The firm’s decision to splash out on a controlling stake in Gatwick (pictured) comes as a consultation on a draft masterplan finishes next week.

Gatwick, which has been pushing maximum capacity for years, would like to move its stand-by runway by 12m to bring it into full use for the first time.

Gatwick says the change could grow annual passenger numbers from 46 million to 70 million.

The proposals contain a plan to invest £1.11bn on related infrastructure in the next five years expanding the airport’s rail station, adding a floor at a departure lounge, improving roads and building two new multi-storey car parks.

A new £88m hangar for Boeing planes is already under construction by contractor John Sisk.

Gatwick is also holding on to land south of its current runway in the hope it may one day build a brand-new runway, after an application was rejected by the Airports Commission in 2015.

Vinci bought its stake in Gatwick from Global Infrastructure Partners, a JV between General Electric and Credit Suisse.

Negotiations had been ongoing for over a year, with the announcement of the deal delayed by a major pre-Christmas incident which saw hundreds of flights held up by a rogue drone.