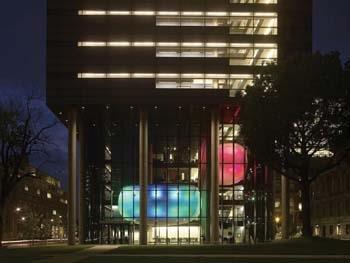 The practice is working in 27 countries and its percentage of work abroad has risen from 57% to 70%.

The international network of satellite and project offices has increased from 16 to 21, adding Copenhagen, Milan, Moscow, St Petersburg and Abu Dhabi, as well as new permanent offices in Dublin, Istanbul, Madrid, Milan and New York.

In its submission for this category, Foster’s entered a range of buildings from the Palace of Peace and Reconciliation in Kazakhstan to the Hearst Tower for the corporation’s headquarters in New York.

The judges commented that: “It is difficult to do anything out of the ordinary in New York, but Foster’s always drives itself and its consultants very hard on sustainability.” The Hearst HQ is the first new office building to be given a LEED gold rating.

The judges said: “If any company represents global architecture GB, it’s Foster’s. It straddles the world with projects of critical acclaim, and in the last year has broken into new markets, showing us that it has every intention of growing its international profile beyond what it has already achieved.