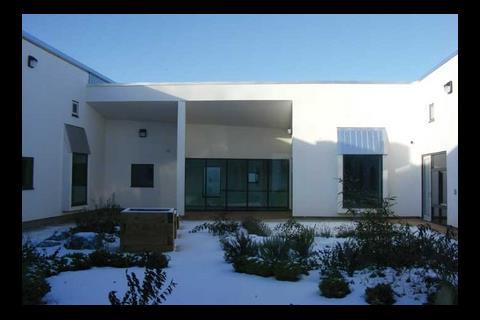 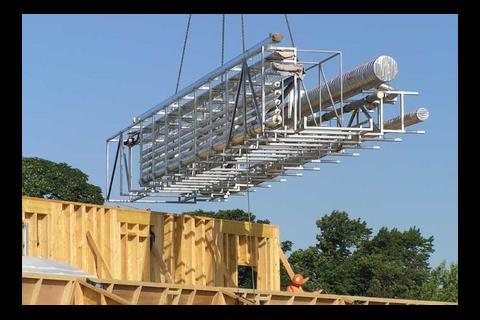 How do you make a mental health facility secure without it feeling like a prison? The answer MAAP Architects proposes is to turn the buildings themselves into a perimeter fence

The phrase small is beautiful might not seem very apt for describing a 312-bed hospital, but this is exactly the approach that MAAP Architects has tried to apply to the UK’s largest new-build mental health project, Roseberry Park. Now nearing completion at St Luke’s hospital in Middlesbrough, it will provide inpatient facilities for mental health, learning disabilities and forensic services for adults and older people.

The Victorian asylum approach to mental illness has long been superceded by more liberal attitudes. “The most enlightened concept is not to build on a hospital site but to build in the community and that had its head in the eighties,” says Mungo Smith, director of MAAP Architects. And yet, aside from a few enlightened clients, the facilities delivered in the eighties, nineties and into this century have often ended up being very large PFI schemes, built on existing institutional sites. And this has created problems. The biggest danger is that you end up with something more like a prison, with dark and dingy internal spaces and, worst of all, a perimeter high-security fence.

There is no getting away from the fact that these have to be secure units, but MAAP believes it has the answer to building a secure but non-institutional mental health facility. Its innovation, applied at Roseberry Park, is to unravel the way the building is laid out. The typical arrangement found in many mental health facilities is a linear cruciform arrangement with rooms either side of the corridors radiating out from the centre. This has the benefit of a reduced circulation area. However, it has less attractive features such as dead-end corridors, the over-concentration of people in one place, potentially creating a pressure cooker effect, lack of views and poor natural ventilation. “Our approach is to break the wards down into clusters of beds like houses. Organising them around courtyards also maximises light and ventilation,” says Smith. The buildings themselves act as the security fence around this central space.

When MAAP won the bid to design Roseberry Park, it was the only design to use single-storey buildings. This does mean the planning is dense in places but the benefit was that the planners allowed them to bring the buildings much closer to the site’s perimeter. In all, around two acres of courtyard gardens have been created.

This does mean more space needs to be allocated to circulation, but the advantage of these “single loaded” corridors is that they provide views across garden courtyards. As soon as a patient opens their door, they get a view into the garden, and the corridor acts as a buffer zone, with built-in window seats where they can relax before entering the more public spaces. The layout also gives easy access to secure external areas and enables more discrete and continuous observation of patients, says Smith.

Of course, this idea had to be made workable. A monopitch design was adopted for the perimeter buildings, with the inner facade at a height of 5.2m – the height of a Category B prison fence – to prevent someone standing on the shoulders of another and scaling the building. This enables the creation of a high corridor into which additional light could spill, while the sloping ceiling is continued into the bedrooms to provide a lofty space.

The high space is also used to accommodate a services crawlway, which runs above the ensuite bathrooms. “FM is always key in any PFI and the crawlway means the services can be maintained without having to shut down a ward,” observes Smith.

The downside to the building plan is that although the landscaping is a key part of the layout, it can be one of the first things to go if it’s not seen as essential and costs are an issue. “You need the landscaping to make it work and you need a design champion who sees the value of it,” says Smith. One of the biggest challenges for architects, then, is convincing clients of the benefits of this approach, but if they can it could change the face of mental health facilities across the UK.

Because of the fast-track programme for the 26,500m2 Roseberry Park scheme, main contractor Laing O’Rourke maximised the use of prefabricated M&E services (pictured) and also opted to use timber cassettes to construct the building envelope. However, the decision to use timber over more traditional masonry for a medium-security healthcare facility wasn’t clear cut. According to Bob Wills, associate at MAAP Architects, there are no guidelines or standards to say you can’t use it, but there were doubts that it would be robust enough. “In Sweden, for example, they wouldn’t dream of using timber; they tend to use in-situ concrete. Likewise, if it was a high-security unit, it would have to be masonry.”

Tests were carried out to make sure it would be robust enough to preserve the quality of the fabric and also prevent escape. Everywhere below 3m in the forensic units, which provide secure detention, the cassettes are lined internally with 15mm of orientated strand board on top of which is fixed a single layer of plasterboard. This is also the case in the acute units, which was done to future-proof these areas should they be converted for forensic use later on.

The basic test involved taking a sledgehammer to it, says Wills, and they couldn’t get through it so it was deemed to be acceptable. In the bedrooms the walls are lined with 18mm of plywood below the plasterboard. “This is where patients are left alone and would have the most time to potentially break through so it was upgraded as a precautionary measure,” says Wills.