2
McCain and Obama: Where do they stand on construction?
Focus

McCain and Obama: Where do they stand on construction? 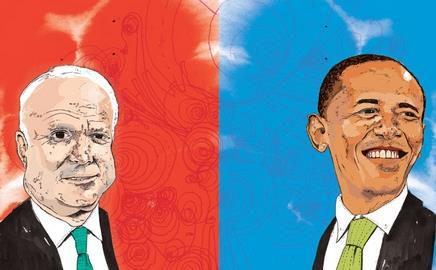 They’re the two most talked about men in the world, but where do John McCain and Barack Obama stand on the issues that matter to the construction industry? With four days to go until election day, Roxane McMeeken and Emily Wright find out what they’ve pledged

Wants to introduce 45 nuclear power stations around the US by 2030. He will also introduce a number of offshore oil rigs – his unofficial campaign slogan is “Drill Baby! Drill!” He has said on the issue: “As we develop all of these alternate sources of energy, it will be vital that we continue oil production at a high level, including offshore drilling.”

Proposes a $300bn (£193m) fund to allow homeowners who need help to apply to a federal housing authority to replace their current loan with a government-backed one. He also believes the Justice Department should set up a mortgage abuse taskforce to help federal prosecutors investigate this area. “Housing and mortgages are at the root of this crisis. I encourage the Treasury to take action to shore up mortgage values.”

Argues that the introduction of the nuclear power stations will create 700,000 jobs in the US by 2030 and that most of those will be construction and civil engineering roles.

Would cut taxes in middle-class families, keep the Bush tax cuts but reduce government spending. He criticised Obama for advocating tax increases, saying it would “turn a recession into a depression”.

Would cut the top rate on corporate income tax from 35% to 25%, a move that he says will “make American businesses more competitive”.

Foreign firms working in the US

No changes proposed to current tax regime but his stance on a windfall profits tax on oil companies shows that his priorities lie on the home front. “All a windfall profits tax will accomplish is to increase our dependence on foreign oil, and hinder exactly the kind of domestic exploration and production we need,” he said in June 2008.

No change proposed for taxes on small businesses and start-ups – despite finding a new friend in disgruntled voter Joe the plumber. Does support tax breaks on investment in innovation and technology.

Plans to invest $150bn (£97bn) over 10 years in clean energy. He proposes increasing fuel economy standards and proposes that 25% of electricity consumed in the US should be derived from clean, sustainable energy sources by 2025. He strongly opposes McCain’s take on the issue: “It is truly breathtaking for John McCain to talk about combating climate change while voting against virtually every recent effort to actually invest in clean energy.”

Plans to invest a $10bn (£6bn) foreclosure prevention fund to help homeowners modify their loans: “We’ve got to make sure that we’re helping homeowners, because the root problem here has to do with the foreclosures that are taking place all across the country. To renew our economy – and to ensure that we are not doomed to repeat a cycle of bubble and bust again and again – we need to address not only the immediate crisis in the housing market; we also need to create a 21st century regulatory framework.”

Has said he will invest $16bn £10bn) over 10 years in local government to fund projects and to develop and maintain a national infrastructure. He says this will mean workers are needed to repair bridges and roads which he sees creating 2 million jobs for the construction industry.

Promotes targeted tax relief to help middle-class families cope with rising costs and stagnant pay: “My attitude is we’ve got to grow the economy from the bottom up. What I’ve called for is a tax cut for 95% of working families.”

Would leave corporate tax rate at 35%. Says he needs to find fewer cuts, since his tax plan would raise $1.2 trillion (£773bn) more in revenue than McCain's plan over the next 10 years.

Foreign firms working in the US

Companies that start or expand operations in the US would get tax cuts. He would close loopholes that allow companies to shelter income, especially in tax havens.

Would eliminate capital gains taxes for investors in start-ups and small firms. Proposes unspecified investment incentives for small businesses and reducing the self-employment tax. Speaking on 22 October, he said: “Let me be crystal clear: If you make less than a quarter of a million dollars a year – which includes 98% of small business owners – you won't see your taxes increase one single dime.”

Original print headline - I vow to thee my country