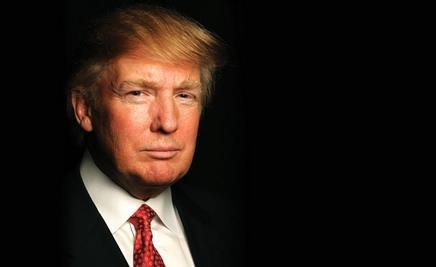 King Donald has become the living symbol of New York real estate. But now he’s busy buying up the rest of the world as well, including Britain. Emily Wright asked him about his dreams

‘You have a beautiful accent honey, really beautiful. It’s so nice to hear it. Anyway, I have 20 people waiting for me outside and I’m late. So let’s start. Right now.”

Donald Trump is a little bit charming, a little more patronising and totally unpredictable. Careering from compliment to command in five seconds flat, his volatility makes interviewing him a nerve-wracking proposition. Every attempt to get under his skin or push for more information is a balancing act with no way of knowing whether he’ll respond with a great answer or a short, sharp goodbye.

Though risky, the probing is necessary as the biggest name in New York real estate has a habit of answering questions in cliches such as “there’ll always be ups and downs but there’s no place like Manhattan” and “never give up on your dreams.” Good advice perhaps, but hardly revealing.

It’s a shame, because there is more to the 62 year old than cheesy one-liners. His colourful past, his wives and celebrity connections may take up much of his public image, but it is what he has achieved in the boardroom that has made him one of the best known businessmen in the world: you don’t build up a business worth $3bn (£1.7bn) on a wing, a prayer and a combover.

Trump’s outstanding talent is for identifying promising property markets and exploiting them. And these days, Britain is topping his list both in terms of development opportunities and the calibre of construction companies. So, even with 20 people waiting for him outside – the man known simply as “The Donald” gives up some time to talk about his Scottish roots, why he wants to work with Brits in the UK and the US and where he plans on taking the Trump empire.

Originally from the New York suburb of Queens, Trump is a local boy but his mother ran away to America from her Scottish hometown, Stornoway, when she was 20. She met Fred Trump, a local builder from New York, and married him in 1936. They had five children, of which Donald was number four.

“It’s a great story and I go back to my mother’s home town whenever I can,” says Trump. “She was a great woman and my father was a great guy. And they had a great marriage. They were married for 62 years. Which is kind of different from the way things are done today, huh?” Whether this is a question or a statement, Trump doesn’t wait for an answer, perhaps so as not to get too far into the issue so soon after the birth of his fifth child to his third wife.

Trump graduated from the University of Pennsylvania in 1968 with a degree in economics before joining his father’s company, the Trump Organisation, which focused on real estate in Brooklyn and Queens. But he always wanted to take it into Manhattan: “It was where all the most beautiful, most iconic buildings were. It symbolised success for me. It was where I wanted to be, so I moved out there. I’m glad I did it. It’s all worked out pretty well.”

Pretty well indeed. In Manhattan alone some of Trump’s best known projects include the $290m (£168m) Trump World Tower, the $288m (£167m) Trump Tower on 5th Avenue and his famous 30,000ft2 personal residence – three floors detailed in gold, marble and bronze which, at $50m (£29m), make up one of the most valuable apartments in the city. Then there are his hotel and casino projects across the US, and a collection of schemes overseas including the Palm Trump International Hotel and Tower in Dubai and his most recent plans to develop in the UK, China, Russia, Korea and Turkey.

‘The UK is doing just fine’

Although Trump keeps the details of his upcoming projects under wraps – “I don’t want anyone to know about the properties I’m looking at and take them from me” – he is prepared to discuss the areas he is earmarking for future development. First, he is quick to dismiss rumblings that Dubai may be about to go south: “I don’t think so. There are still many opportunities and we are planning an awful lot more out there. I am not holding back from that market at all.”

He adds that his organisation is looking to expand in Britain, and is full of praise for the old country: “I think the UK is doing just fine. I don’t think it needs to learn too many more lessons from the US. For example, the UK government came up with the formula for the banks.”

And this glowing praise extends to the UK construction industry. “It used to be that if you were good in construction or property in the US you’d be good in the UK but I think that’s true vice-versa these days. I, for one, like working with UK firms and architects.”

It would be easy to dismiss this comment as Trump paying lip service to a market he wants to get on side. But his money is already where his mouth is, as he works with a number of UK firms in New York.

While there are some who praise Trump’s drive to achieve the “world class” project, he has not impressed everyone in the UK. His only scheme in the UK is a £1bn, 1,400-acre golf course near Aberdeen. Patrick Harvies, a member of the Scottish parliament, disagrees with first minister Alex Salmond’s support for the project, saying: “Donald Trump’s idea that Aberdeenshire should rely on American tourists arriving by jet and spending their time and money here is both fundamentally flawed and unsustainable.”

Thanks to the political row and opposition from environmental groups, it is perhaps unsurprising that things are moving slowly on the golf course. The problems arose as the course was originally to be built on sand dunes which are sites of special scientific interest. “We’re waiting to hear back from the government after we did some re-zoning and I am not one to rush the government,” Trump says before adding, “It’s the greatest piece of property I have ever seen.”

Really? “Well, it’s the best piece of property in terms of building a big golf course.”

Trump may be a billionaire but this economic climate is enough to rattle even the wealthiest of men. After all, he is relying on people to keep up a life of luxury – staying in the best hotels, buying the best apartments, gambling and playing rounds of golf. And he predicts that the construction and property industries in Manhattan will suffer.

“I am sure the time will come when Manhattan experiences a downturn. And I have learned how to deal with that the hard way.” He is talking about his financial problems during the last recession when, in 1991, he had $900m (£520m) of personal debt and $3.5bn (£2bn) of business debt. Deals with banks had to be made for Trump to salvage his livelihood.

But this time around things are looking much rosier – not least because he has benefited from some lucrative deals at just the right time: “The economic situation is severe and will be around for a while. But I have been fortunate as a lot of my latest developments were completed and sold just before the crunch, like my property in SoHo, New York. I even sold a house in Palm Beach for $100m (£58m) six weeks ago – very lucky.”

Talking about his accomplishments, Trump is upfront and relaxed. He has no time for modesty: “I buy all my properties in cash, honey. I am in a position to do so.”

And he says that his calm confidence is because “I never think about failing”.

The answer to the question and the excuse to leave run seamlessly together. There is just enough time for a few more questions, although Trump answers them as bullet points. He’ll be supporting McCain in the election because he prefers his tax policy, he thinks being liked and being successful can be synonymous as long as you know what you are doing and he believes the most successful people in business are cleverer than they are tough.

He does spare a final seven seconds to offer his ultimate piece of advice: “Honey, just keep going, never quit and always follow your dreams.” Well, it’s a little bit charming and a little more patronising but this time at least it’s completely predictable.