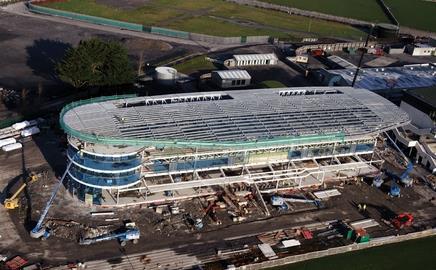 Fitting a roof shaped like a gigantic aeroplane wing in an elevated and exposed location near the Atlantic coast might seem foolhardy, but this was exactly what the team building the new Killanin Stand at Galway racecourse in Ireland decided to do.

The roof of the 7,000-seat stand curves from front to back and along its length and is clad in structured polycarbonate sheet to provide soft, diffused daylight inside. Architect EPR and steel fabricator Ballykine Structural Engineers had to work hand in glove to develop a design that was quick to install and resistant to the harsh conditions.

Karen Summers, the project architect, and Ian Kerr, managing director of Ballykine, explain how it was done.

What was your original vision?

Karen Summers The design brief was straightforward: to provide cover and clear sight lines so spectators could see the races.

What did you think when you were presented with the design?

Ian Kerr We first saw it at the tender stage and it is certainly one of the more unusual projects we’ve tackled. The complexity was evident straightaway.

What was the main challenge?

KS The downside with any covered stadium is that you get dark spaces at the rear of the stand and we wanted to try to limit this. The other issue was the complex nature of the cantilevered roof canopy. From an early stage we had to get people understanding the geometry of the roof and the way it curves. It’s also a very exposed site and tying down the roof – which is shaped like an aeroplane wing – required a large structure and connections.

IK The biggest challenge for us was the complexity of the structure and the lack of repetition in the steel members. This lack of duplication made it very labour-intensive. It was also a tight construction programme. There was only the window between the racecourse’s two summer festivals to demolish the existing stand and complete the new one.

KS We went through many stages to make it work and held a series of design workshops, during which we brought the separate subcontractors together and went through the design.

To try and get the diffuse daylight effect inside, we opted for a polycarbonate roofing system. We looked at a number of systems – many of which were discounted on cost grounds – before selecting one from Brett Martin Daylight Systems. This uses about 2,500m2 of translucent grip sheets with an opal tint that allows a controlled amount of light to diffuse through. On the canopy soffit we used an interlocking panel system with structured polycarbonate sheets. These sit within aluminium frames that are coated with polyester powder to blend with the glazing.

IK Once we had the design from the structural engineers we used a 3D software package – StruCad – to carry out the detail design. Without this it would have been impossible. The 3D approach allowed us to pick up any clashes between steel members, connections and the brackets used for supporting the roof system and cladding. It ended up being like a massive Meccano set with thousands of separate pieces, all of which were delivered to site in an agreed sequence of 20 tonne loads.

Were there any manufacturing issues?

KS The main issue was that we were building the stand at the same time that Corus had supply problems and prices were rising all the time, although we still managed to complete it all on time.

IK At the same time as we were doing all the fabrication off site we also applied the intumescent paint for fire protection. Because we were doing this off site, we couldn’t go and make any changes or weld in additional support brackets once the frame was up. This meant we had to co-ordinate closely with the cladding and roofing suppliers and contractors to make sure everything needed was included and in the right positions.

KS It worked out really well. The photographs of the finished project are identical to the computer-generated images we made two years ago – you can virtually lay them over each other.

IK It’s a fine looking building. From a financial point of view it’s probably not one of the best projects we’ve worked on but as a PR job it’s been very good. We’re constantly getting comments about it.