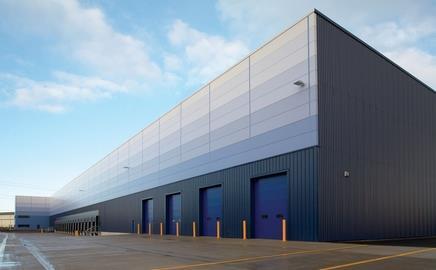 Large industrial sheds are difficult and expensive to heat but a new system that turns the building into a huge solar collector can warm the inside space, cut carbon emissions and meet the demand for renewables. Stephen Kennett reports

Imagine being able to turn the entire envelope of your building into a massive solar collector, capable of capturing the heat of the sun’s rays throughout the year and redirecting it to warm the space inside. It might sound like a fanciful idea, but it could be a very useful one, particularly if you’re the owner of a massive distribution shed.

One major logistic warehouse company has done just this and in the process has managed to shave a, not insignificant, 142 tonnes of carbon dioxide from its annual footprint. Initially run as a trial project, the system used on the 16,500m2 building is about to be rolled out as an off-the-shelf product.

The Energipanel, as it’s known, has been in development for the past two-and-a-quarter years by Kingspan Insulated Panels. It’s been cunningly adapted from the company’s existing Five Crown range of profiled insulated metal cladding. The idea is simple: the outer steel skin of the profiled panels is used as the solar collector, while the foam insulation in the panel ridges is omitted to create paths through which fresh air can be drawn. This picks up the heat from the metal skin, which can then be channelled into the building and used for space heating.

It’s on large industrial sheds that the firm sees potential for the system. “It’s a way of giving logistic centres or warehouses lower environmental profiles and making them more acceptable to planners,” says William McDowell, business development manager at Kingspan. It’s also a means of meeting a local authority’s demand for on-site renewables. On the pilot project in question, installation of 890m2 of Energipanel was enough to satisfy the 10% on-site renewables target set by the planners. Modelling data provided by the firm convinced planners that it would provide 556kWh of energy over the year, equivalent to the 142 tonnes of CO2 saved.

What also gives it the edge over other renewables, McDowell points out, is that it is already an integral part of the building. It takes the place of the cladding that would be used for the roof or walls anyway. It’s not added-on, like micro wind turbines or photovoltaics are.

The system is manufactured on the same line as the company’s Five Crown range. Removing the insulation from the profiles to make way for the air paths wasn’t as straightforward as it might sound. “There is a cost penalty as the construction line is slowed considerably to do this,” says McDowell. However, the thermal integrity of the panels has been preserved (0.25W/m2K for roofs and 0.35W/m2K for walls) by providing additional insulating foam to the overall depth. The only other change to the production process is the addition of small mesh filters at one end of the sheet to prevent debris and insects from entering the voids, and a rubber stop at the other end.

Installed, it is virtually identical to the Five Crown cladding panels. Once fixed, holes are drilled through the internal backing tray and into the air paths. At this point the building is effectively “solar ready’’. The end user has two options: either plug the holes using profiled fillers and leave the panels to be activated if and when the end-user requires them, thereby future-proofing the building; or, install a collection system so the panels are fully operational.

The latter comprises a plenum – which comes as a 3m wide module – that fixes horizontally over the holes drilled in the backing tray and is sealed with expandable foam tape. The warm air is then pulled into the twin chambers by a low power fan – on the pilot scheme these accounted for 5.7 tonnes of CO2 – and discharged into the space via vents.

The fans are triggered by a thermostat that turns them on when the temperature inside the building falls below a predetermined level. In the event that the surface temperature of the panel isn’t adequate to heat the air drawn through, a sensor registers the cold air and turns the fan off.

The burning question is how much of the time the system will provide beneficial heating. Solar radiance levels as low as 400W/m2 – the level that’s typically achieved when the sun is rising or setting on a bright day – can give panel surface temperatures in excess of 20°C. Tests have shown that with consistent solar radiance levels of between 500W/m2 and 650W/m2, a constant supply of heated fresh air of 21-23°C was provided. This means a temperature rise of 11-13°C.

Data suggests that these solar radiance levels exist for over two-thirds of the days during the winter, spring and autumn months, when heating is most needed.

In further tests the system was shown to be capable of maintaining a building temperature – with open doors – at 16-19°C for four hours before sun levels dropped below what was required. By comparison, the control warehouse in the same test struggled to maintain the same temperatures with a 12kW gas-fired blow heater.

The idea is that the Energipanel will always be supplementary to the main heating system and take precedence over it when conditions allow. As a product for greening massive warehouses it couldn’t be simpler. To date, McDowell says the company has kept quiet about it but it is now ready to launch. Early interest suggests there’s about 15,000m2 of demand in the pipeline, including from the developer of the early trial project who has already placed a further order.