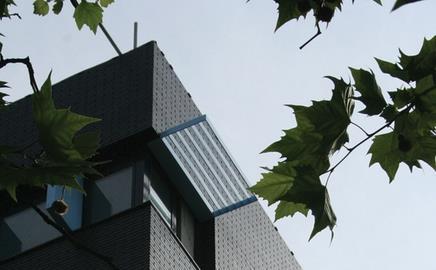 When NHS Local Improvement Finance Trust (Lift) Building Better Health and Southwark council decided it wanted its £7.7m Sunshine House child development centre on Peckham Road to be naturally ventilated, architect Allford Hall Monaghan Morris thought it was a good idea to use brises-soleil to block out some of the sunlight. It envisaged these solar shades as sky blue elements, springing from cuts in the brickwork around the windows.

In doing this, the team had to comply with three sets of regulations:

What was the brief?

Thomas Gardner The client wanted the building to be naturally ventilated and lit, so we opted for brises-soleil on the south, east and west facades to prevent overheating.

TG The shades were originally conceived as solid elements, but we realised this meant not enough daylight was getting through to the building. Part L requires a minimum daylight factor, the proportion of light reaching working surfaces inside a room, of 2%. This is so excess energy isn’t wasted on artificial lighting. We wanted to achieve 3%.

We also had concerns about cleaning of the shade and the fact that a solid surface would create an area for pigeons to roost.

Andy Gill To solve this, we experimented with various options before settling on orthogonal elements with vertical louvres to let light through and make them easier to maintain.

Our main decision was what metal to use. Mild steel was considered but we settled on aluminium because it corrodes less. It’s also lighter and easier to drill, which meant the pieces were more straightforward to put together on site. This also helped meet the CDM regulations.

The final design had a 10 × 100mm aluminium flat-bar main frame, with 5mm blades.

Lee Morris We were brought in to design the masonry support system for the shades and to help meet Part A. The shades would have to cope with the force of wind and the weight of people standing on them to clean them. Standard lintels would not have been strong enough. We devised a system that involved fixing the panels to brackets behind the brickwork, using fixings cast into the edges of the concrete slab.

Channels were cast in to the concrete slabs instead of using expanding bolts because these made the shades quicker and easier to fix. It also meant drilling was avoided, which helped meet the CDM regs.

Were there any problems?

LM The accuracy of the concrete slab edges proved to be a small problem. They weren’t exactly where we wanted them so we used packing shims behind the brackets.

AG We had some problems with distortion of the outer flaps of the brises-soleil so we had to put in stiffeners.

Are you happy with the end result?

TG I’m pretty happy. There were a few issues with welding, as some of it had to be done at a later stage, but overall I’m pleased.

AG We completed our work on time and to budget so all was well in the end. The fact that the architect was flexible about our solutions made the process easier.

LM We were given quite a lot of freedom to contribute our ideas. Usually, masonry support design is left until the last minute.