9
Sustainable schoolrooms: Here’s one for the kids
Focus

Sustainable schoolrooms: Here’s one for the kids 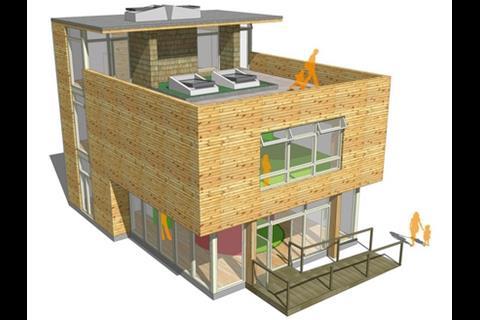 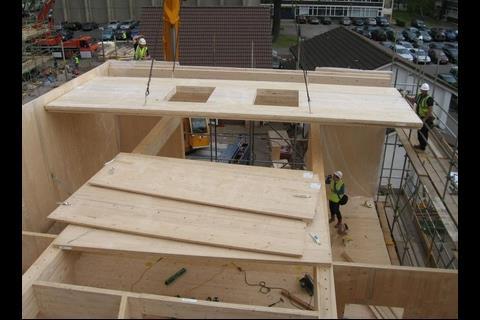 The school being assembled at BRE’s headquarters in Watford 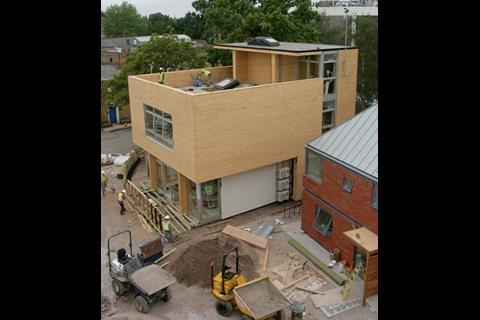 Willmott Dixon’s classroom of the future may sound like something made in the Blue Peter studio – with its strips of waste wood off-cuts and glue – but it’s quick to build, affordable and carbon neutral. Alistair King looks at one they made earlier…

In what kind of setting will children of the future be taught? Will it be like yours? A draughty Edwardian classroom with iron radiators on full blast, or maybe a stifling mobile hut with condensation streaming down the windows all winter?

The team behind one new school believes the classroom of the future will be nothing like those. Responding to the government’s Building Schools for the Future initiative, it says it has developed a carbon-neutral prototype that can be made off site. The team, led by Willmott Dixon’s Re-Thinking division, says the school will be quick to build, commercially viable, and affordable to the country’s cash-strapped local education authorities (LEAs).

The Re-Thinking School of the Future, as the team is calling their brainchild, is the result of months of collaboration. They are showcasing it at the BRE’s Offsite2007 exhibition this week, where it is being shown among an array of low-carbon houses.

The building itself is a “slice through”, comprising a 56m2 upstairs primary school classroom and a section of a secondary school downstairs.

The team’s aim was to display the sort of construction techniques that they would use for bespoke full-size schools. At about one-twentieth of the size of a typical school, economies of scale precluded the installation of biomass boilers and ground-source heat pumps for this model, although photovoltaics, solar thermal and wind technologies have been included.

Despite these limitations, project architect Craig White of White Design says the building is at least carbon neutral, in line with the heating and hot water requirements of level 5 of the Code for Sustainable Homes. Subsequent schools, he hopes, could become zero carbon by generating all the power they use, and in reality carbon negative.

The backbone of the project is the superstructure. Designed by timber engineer Eurban, the structural shell is made from a board called Lenotec. Fabricated in Germany by Finnforest Merk, Lenotec is a highly airtight panel, comprising strips of waste wood off-cuts and glue. The panels are self-supporting in two directions, so require no additional framework, and are used as load-bearing walls (up to 85mm thick on this model) and floors (up to 190mm thick). Made from fast-growing European spruce, the only aspect of Lenotec that is less than environmentally commendable is its journey from Germany to Britain. White says that, for this model, 4 tonnes of carbon were emitted in transportation compared with the 83 tonnes sequestered by it. He also predicts that manufacture will move to this country in due course.

Additional structural components, including glulam beams and columns, are used where there are large expanses of glazing. The building, which can be built up to 10 storeys high, is fixed to screw-pile foundations, which need no concrete and can be easily uprooted. Lead times on the flatpack components are four or five weeks, and then the building can be erected in four or five days.

Darren Richards, managing director of off-site consultancy Mtech, sounded suitably impressed when told about the project. “It’s a great concept,” he said, “and I wholly embrace the sentiment of what they’re trying to achieve,” but he questioned how the building would be insulated.

The answer lies in the make-up of the wall. Although this type of construction has been used on an isolated apartment block, it is otherwise new to the UK and, according to White, it is the first time it has been used for a whole school. As well as the Lenotoc, which also acts as a vapour barrier, it comprises Pavatherm wood fibre insulation, which is coated in a secondary waterproofing layer of paraffin wax, and battens, onto which cladding is finally affixed. Various cladding options are available to provide a rainscreen. UK white cedar was used for the exhibition model but materials such as recycled plastic from old telephones can also be used.

This superior insulation reduces space heating requirements, while ductwork for ventilation is massively reduced by the use of an automated device called the Window Master System, which uses sensors to open and close the windows. Julian Cottrill of Max Fordham, the team’s M&E consultant, admits, however, that further work on sound mitigation is needed to meet the stringent requirements of the Building Bulletin’s technical standards for schools.

Other M&E components, developed by Max Fordham and NG Bailey, include daylight “chimneys” and grey water capture devices. True to the building’s design ethos, most of the pipework and electrical network was assembled in modules off site in sections up to 6m long.

Representatives of 120 LEAs planned to visit the Re-Thinking School of the Future stand. At the end of the show, the team hopes to dismantle the prototype and sell it to one of them as an extension to an existing school. But true success will only come if the team generates a flood of bespoke orders for standalone schools …