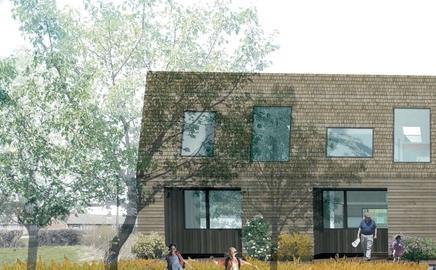 Sustainability Our Housing Expert section kicks off with a look at how a Suffolk housing association has built a super-efficient development out of hemp and lime.

Houses made of hemp might sound as though they were dreamed up by a bong-wielding Swampy appreciation society rather than a serious housebuilder, but that could be about to change. In Suffolk, a plant best known for its mind-altering chemical content is being used by a housing association to built eco-friendly homes.

Orwell Housing Association’s 26-house development in Elmswell is the first sizeable project in the UK to use Tradical Hemcrete, a mix of hemp and lime, as a spray on its walls. This material is made of shiv (that is, the woody core of hemp plants) and pure lime, and it can be sprayed onto a timber frame, much like concrete, or cast between temporary shuttering to form a wall panel. It is then coated with a lime render or a rain screen to protect it from the weather. Lime Technology, which makes the lime binder in the mixture and provides expertise on using the material, also plans to make it into blocks.

Hemcrete has many environment-friendly qualities, including the fact that is is carbon negative, because the hemp plants bind carbon and emit oxygen while they grow. The production of each square metre of wall in a traditionally built house will emit about 200kg of carbon dioxide, whereas a detached Hemcrete home with a floor area of 52m2 should lock 5.4 tonnes of the greenhouse gas into its walls. The material is also recyclable and any construction waste can be used for garden mulch. Adnams, the Suffolk brewer that used an earlier version of Hemcrete in a warehouse, managed to save more than 500 tonnes of CO2 in the construction process.

It was these green credentials that attracted Riches Hawley Mikhail Architects to the material. The Elmswell site (pictured) was the subject of an RIBA competition to design ecologically-friendly social housing. The designs also had to relate to the county’s architectural heritage, as specified by the Suffolk Preservation Society. The lime in Hemcrete ticked another box for the designers: “The use of lime is quite a big thing in traditional building, particularly in Suffolk,” says architect Cathy Hawley.

On the other hand, previous uses of lime and hemp in buildings have raised some points of concern. A report by BRE into two hemp houses in Haverhill, Suffolk, in 2001 found that the material conducted more noise than block and brick, although it still met sound resistance regulations. Ian Pritchett, managing director of Lime Technology, says this was because the walls at Haverhill were thinner than the 300mm he recommends. In addition, they were not built from Hemcrete, but from a different type of lime and hemp mix. Lime Technology is conducting more tests on Hemcrete, but so far the company says it absorbs up to 90% of airborne sound.

The BRE report added that building the hemp homes in Haverhill generated a similar amounts of waste as traditional building techniques, albeit of a different nature.

Pritchett says this does not have to be the case. He says recent Hemcrete projects, including the construction of his own office, created very little waste. “We installed 120m3 of Hemcrete and had two black bin liners of waste at the end,” he says.

Finally, there have been reports of other hemp buildings smelling rather like a hamster’s cage, but Pritchett says he has never detected this rodentine whiff, despite working in a Hemcrete office. He thinks the story may have come from some of the homes built in France in the past few decades. Hawley says she detected a certain “farminess” in the smell of the freshly sprayed Hemcrete but added that it would probably disappear when the building was rendered.

There have been reports of other hemp buildings smelling rather like a hamster’s cage, but Pritchett says he has never detected this rodentine whiff

With these concerns in mind, Sumatec, another green building material, was originally going to be used for the project, but it was abandoned at the design stage for several reasons. Also made by Lime Technology, these are blocks of compressed, unfired clay left over from traditional brick making. They would have been used to build the gable ends of the house and would have had the floor joists attached to them, but the architects had doubts about their ability to support the joists and thought that they would also need to install concrete ring beams, which they did not want to do.

“It seemed more sensible to do the walls in Hemcrete rather than come up with an over-engineered solution for the Sumatec.” What eventually swayed the team’s decision was the fact that constructing the wall entirely from Hemcrete would make it more thermally efficient, as there would be no gap between materials where heat could escape.

Hemcrete is marginally more expensive that traditional materials – it costs about £120-160/m2 for a 300mm wall, whereas a standard cavity brick-and-block wall comes in at £100-150/m2. However, Pritchett says this extra expense is counterbalanced by the energy efficiency of the material. “They are in the same ballpark but, thermally, the Hemcrete wall is better,” he says.

Deciding on the material was easy enough but using it was a unique challenge. As this was the first project to use sprayed Hemcrete, the Elmswell scheme presented something of a learning curve. The spraying subcontractor had to make extensive modifications to its concrete spraying and mixing equipment to stop the knotty hemp blocking them.

So what will the tenants make of these buildings? Hawley says the Elmswell homes have been let or sold though shared ownership ahead of completion. “We have had lots of consultation. The eco side goes down well. As does the idea that their heating bills won’t be huge.”

Hemcrete seems particularly suited to social housing, given the Housing Corporation’s requirements that all new homes meet level three of the Code for Sustainable Homes from this year. The Elmswell homes also meet the “excellent” standard of the BRE’s EcoHomes ratings system. They do not yet have their rating under the Code for Sustainable Homes, which replaced Ecohomes, but Hawley is confident the development will score highly.

A lot of the practicalities are also out of the way – so far, one major insurer, Zurich, guarantees hemp buildings and another, LABC, is expected to accredit them by February. By 2016 all new homes will have to be zero carbon and Pritchett hopes this emphasis on environmental performance will generate more interest in Hemcrete.

At the moment Lime Technology has the capacity to produce about 2,000 houses a year. Pritchett hopes one day to expand to 10,000 or 20,000. “We think the big scale stuff will be driven by the Code for Sustainable Homes,” he says.