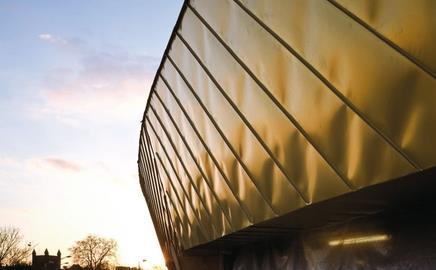 Contractor £2.8m in the red after dispute with Colchester council and three other problem jobs

The row between Banner Holdings and Colchester council over Rafael Viñoly’s £26m visual arts centre contributed to a 57% fall in turnover and a £2.8m loss in 2008.

It was the most high-profile of four problem jobs at Banner, the others being a commercial scheme in Sheffield, a private care home deal in Nottingham and a row over contract extension payments on a job for Winchester and Eastleigh NHS Trust. As a result of the disputes, turnover fell from £23.9m to £10.3m.

Banner and Colchester council have been in a row over the arts centre since the end of 2007, when a string of disputes began over technical issues, including the design of the guttering. According to Peter Elston, chief executive, the disagreement cost the company up to £4m in 2008. In its accounts, Banner said it had submitted “a sizeable claim”, which is believed to be in the millions, for money it says it is still owed.

The biggest impact on the firm’s top-line was from the Nottingham scheme, which was abandoned after the first phase owing to the recession, and deprived the company of £10m.

The £3.5m Sheffield scheme had the biggest impact on the bottom line and cost the company £2.7m in profit after the client, Steenburg Property, went into administration. The job was also plagued by rows about time extensions and additional costs. “We were quite miffed about the way the client treated us, to put it mildly,” said Elston.

Despite the difficult year, which left Banner with net debt of £359,381 compared with its positive cash balance of £1.8m in 2007, Elston said the company was not in financial danger and that most of its jobs were successful. “We are like a Weeble; we’ve taken a big punch but we’ve got back up,” he said.