2
Acoustics: The sound of silence
Focus

Acoustics: The sound of silence 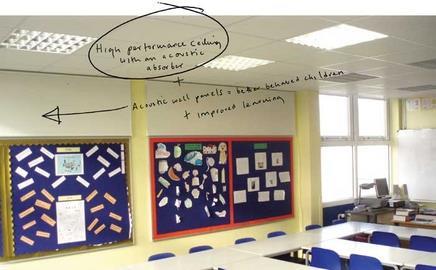 Last month the government announced it was taking action on poor acoustics in schools. In a package of measures, the Department for Education, Schools and Learning will now require all new schools built under the Building Schools for the Future programme to undergo acoustic testing, with a view to extending this to all new schools some time after June 2010. On top of this, local authorities will not get funds for more schools unless those recently built have also passed an acoustic test.

The announcement is seen as a breakthrough by the National Deaf Children’s Society (NDCS), which has been campaigning for better acoustics in schools. However, a groundbreaking study by David Canning, an independent audiological consultant, at a school in Essex has concluded that Building Bulletin 93 – the government standards on acoustics – is inadequate, not only for children with hearing difficulties but for general teaching and learning.

Instead Canning is calling for acoustics to be brought to the fore in the design of all new schools and refurbishments, saying it now has the evidence that good acoustics can significantly improve teaching and learning environments.

The study at the Sweyne Park School was the first of its kind. The initial aim was to explore the effects of different acoustic standards in classrooms. The school is one of three secondaries in Essex with facilities for students with hearing impairments and the council allocated £150,000 to refurbish classrooms to three published acoustic standards – a BB93-compliant classroom, an enhanced BB93-compliant classroom for use by deaf pupils and a third enhanced to the standards set down by the British Association of Teachers for the Deaf (see graphic) – and then test them.

The three classrooms were refurbished in what is known as a double blind study – that is, they looked identical so as not to influence anyone giving feedback, and the person analysing the data was not told which classroom the results related to. While these classrooms were refurbished, a fourth was left unchanged to act as a control. Seventy-eight hours of detailed acoustic data was gathered, along with feedback from more than 400 deaf and hearing pupils and 13 teachers.

The main parameter the team was able to control when refurbishing the rooms was the level of sound absorption, says Colin Campbell, concept developer for education at Saint Gobain Ecophon, who helped out with the study. The classrooms are typical of many schools built in the sixties, with exposed concrete ceilings and high levels of glazing. Suspended ceilings with varying acoustic properties were installed in each classroom along with sound-absorbing wall panels, all the refurbished classrooms are specified to look the same.

The interim report of the study concluded that the gap between how much partially deaf and non-deaf children can hear narrowed considerably when the acoustics improved and in some cases they performed equally well.

However, the focus of the study soon shifted from just looking at those with hearing difficulties to teaching environments in general. One of the most significant findings was that increasing the sound absorbency reduces the sound levels more than predicted by the calculations. “That is an important finding,” says Canning.

Increasing the absorbency in the room increases the rate of decay of the sound and reduces the reverberation time, which in turn helps reduce background noise levels.

“I suspect that is because children in a classroom are like adults in a cocktail bar – their voices increase to the point where they can’t hear each other so if you’re in a room where the sound is killed at source or doesn’t survive long in the room, they don’t need to be loud and their voices drop,” says Canning.

Canning says they found they were getting good signal-to-noise levels – how much louder the teacher or child needs to be above the background noise to be understood – even when the classroom is full – just by addressing the way they are designed.

The upshot of this is a dramatic effect on behaviour. The increased rate of decay prevents sound from building up in the classrooms, resulting in quieter classes where the children find it easier to listen and be heard. A tapping pencil no longer disturbs the entire class. “It creates opportunities that wouldn’t have been there before, such as group working,” says Canning. “And means the teacher can let them get on with their work and focus on individuals. It shows that the environment has a dramatic affect on teaching and learning.”

It was also discovered that controlling low-frequency sounds had a bigger effect than medium and high frequencies as these seem to have a bigger impact on communication.

Canning says the Sweyne Park project shows what is achievable at relatively low cost. He says the study shows the minimum standards set down in BB93 are inadequate. “The response of teachers going from a classroom with a reverberation time of 0.8 seconds (BB93 requires a mid frequency reverberation time of 0.8 or less) to one of 0.4 seconds with low frequency control – the enhanced standard – is dramatic. The standards need to change.”

As a result of the research and evidence to date, Essex council is looking to adopt the enhanced BB93 requirements, with a focus on dealing with the low frequency reverberation times, for all new schools in the future. This, it says, is a good balance between effectiveness and cost.

Next year the government is due to carry out a public consultation on BB93 while a full review of Part E of the Building Regulations – those covering sound – could lead to revised regulations by 2013.

However, for many pupils in school at the moment, it will be too late.