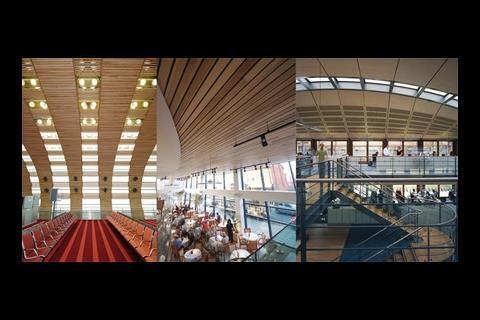 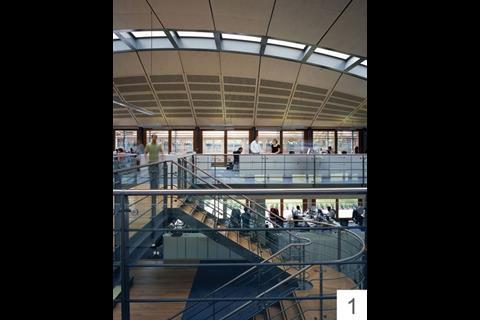 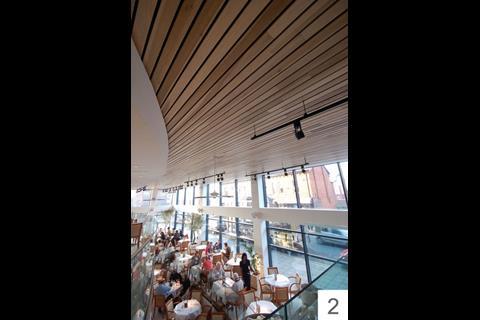 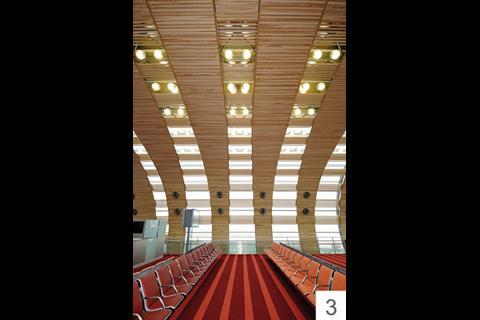 Birch veneer ply has been used for the ceiling at the headquarters of the Lawn Tennis Association in Roehampton. The roof was created by a series of arched I-beams, which resulted in the ceiling’s complex geometry that curves in plan as well as section. Installed by BCL Timber Projects, the roof incorporates 15mm-thick sheets that were flexible enough to accommodate the curvature. These were prefabricated and are held in place by concealed fixings, which allows the smooth and uninterrupted line of the ceiling to be maintained.

The plywood was given a factory-applied lacquer finish to reduce on-site work as well as a class O treatment to prevent the surface spread of flames.

At the Croma restaurant in Manchester, a slatted wood ceiling finished in American poplar has been installed over the full length of the double-height dining space. Architect Ombler Iwanowski wanted a contemporary feel and specified a solid linear wood ceiling system from Hunter Douglas Architectural Products. The random effect of the poplar was created by mixing dark and light

Hunter Douglas says the clips are crimped onto grooves in the panels, which means they do not warp and remain straight. The expansion and contraction of the wood, caused by fluctuations in humidity, are evenly divided over the length and width of the panels.

For interior applications, the panels are finished on the three visible sides with UV-resistant, fire-retardant varnish. Alternatively, they can be impregnated with a fire-retardant substance through a vacuum pressure method.

Other types of wood are available for this type of roof, including pine, red cedar, ash and spruce.

One hundred and fifty structural timber arches made out of birch plywood were used in the reconstruction of the Charles de Gaulle airport Terminal 2E concourse. The arches sit inside the steel and glass barrel that makes up the 700m-long concourse.

Spanning the 32m width of the vault, a total of 130 standard arches are used. These are made up of six sections of up to 8.5m, each weighing almost one tonne. Every 8.5m section is made up from more than 100 European ash-faced Finnish birch plywood battens, the grading and sequencing of which was prescribed by Aéroports de Paris. Each section was built up using this sequence.

In addition, a further 20 arches, which make up the end arches for each of the 10 zones of the terminal, were built up on site, as they were too wide to prefabricate off site and transport.