3
Adjustable-depth pools: Out of the deep
Focus

Adjustable-depth pools: Out of the deep 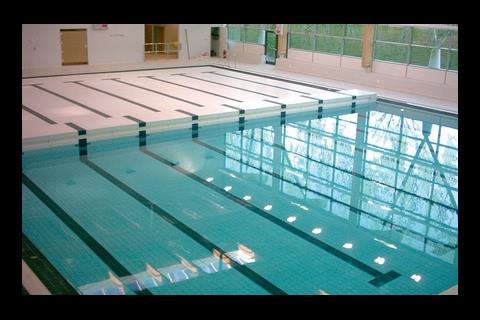 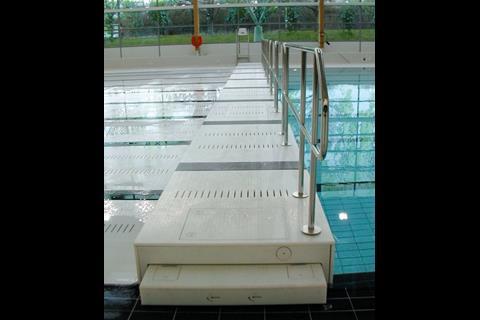 With Euro Pools’ system, different areas of the same pool can be partitioned, with each section served by an independent movable floor

A swimming pool contractor found itself in uncharted waters when it came up with a raisable floor system. Now all it had to do was find a suitable material

The concept sounds superb: a swimming pool with a mechanism that allows its depth to be varied to suit diving, paddling or swimming. Four years ago a Glasgow-based pool contractor turned that concept into reality. Now it seems about to crack the leisure market.

This is hardly surprising, as having all these uses within the one pool, rather than having to install separate facilities, has several advantages. David Wyllie, the managing director of specialist contractor Euro Pools, says: “Energy cuts are enormous, building areas are reduced and occupancy is increased. This is particularly true if booms are used to separate areas of the same pool, each serviced by independent movable floors.”

Given the aggressive nature of the water used in such pools, using the right material for the floor is crucial. Until now, Euro Pools’ system has supported a perforated deck on a stainless steel frame, but this solution brings problems of its own. Wyllie says: “There were issues of stress corrosion, manual handling difficulties, fabrication time and raw material cost fluctuations. And because of its nickel component, the price of stainless steel has risen by 70% in the past 12 months. And we were using an exotic variety of steel suitable for swimming pool water, so it was rocketing.”

So last November, Euro Pools hired White Young Green’s (WYG) specialist structures division for the task of finding an affordable, lightweight substitute for stainless steel that would offer rigidity, stability, corrosion resistance and a slim profile for the frame.

The solution it came up with was unique – yet in some ways quite traditional. Rhys Bowen, a consultant engineer with WYG, explains how it began: “When we started researching alternatives to steel, we knew the floor frame had to perform three tasks: people would need to be able to walk on it; its deflections would have to be minimal; and it would need to be buoyant or have neutral buoyancy, depending on the mechanism we chose. And we wanted to integrate it all into one structural system.”

This integration proved difficult. Early in the design process, Bowen decided plastic would be a good corrosion-resistant base material. But the types he initially investigated were unsuitable on the grounds of cost, or because they “wouldn’t come together in the timescale I was working to”. So he looked at plastic pipes but “there would have been stiffness and depth issues”.

We were using an exotic variety of steel suitable for swimming pool water, so the price was rocketing

Finally he considered composite I-beams made using pultrusion, a process similar to extrusion, in which reinforcing fibres (in this case glass) are pulled through a resin (in this case vinylester). Fed through a heated die, the resin polymerises to form structural members, or pultrusions, of constant cross section. According to Bowen, these “have a higher strength-to-weight ratio than steel”, which means, among other things, that they can be comfortably carried by two men, whereas steel beams need heavy lifting kit. He was equally keen to exploit the material’s low maintenance requirements.

Having made the decision to use pultrusions, Bowen’s focus shifted to the floor design itself, which he based on a “typical, tried-and-tested system of floor beams”. Flexibility, though, is crucial to the brief, as Euro Pools wanted WYG to find a solution that could be adapted for pools with different live loads and sizes of up to 25m × 25m. “It’s a balancing act,” Bowen says. “We have to juggle cable restraint positioning, the number of primary and secondary beams, and beam depth, which should be less than 600mm”.

Each floor has to be designed for its specific location. However, each has the same basic ingredients, much of which can be prefabricated. These are: main beams around the perimeter and spanning at appropriate positions in between; secondary beams at right-angles to the main beams, set at 1m centres; foam blocks fitted between the secondary beams; and cable connections at critical points under the main beams, to tie in with the mechanism. The uppermost structural layer is made from a perforated 25mm-thick polythene panel.

The principle behind the movement of the floor is straightforward: the foam blocks keep the structure buoyant and steel cables, attached to its underside and fed through a series of pulleys to a hydraulic cylinder, control the platform’s vertical movement and provide restraint when it is at rest.

Engineering the system to accommodate the new floor structure requires much fine tuning. Billy McKnight, Euro Pools’ principal mechanical engineer on the project, worked on the original steel-based system, which he said required “tremendous mechanical changes” to be adapted for pultrusions. “We used finite element analysis on hot spot areas,” he says, adding that they had to work to smaller margins of error than those acceptable for steel. Collaborating with Bowen, much of McKnight’s work has concentrated on positioning the connection points, which have changed, and buoyancy, which he looked at “very diligently”.

Time – and sales – will tell whether their work is fruitful. But the signs are positive and, according to Bowen, this is further evidence that pultrusions have a wide variety of structural applications where stainless steel would otherwise be used.