5
Get with IT
Focus 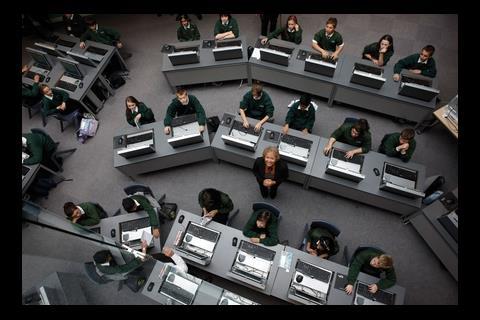 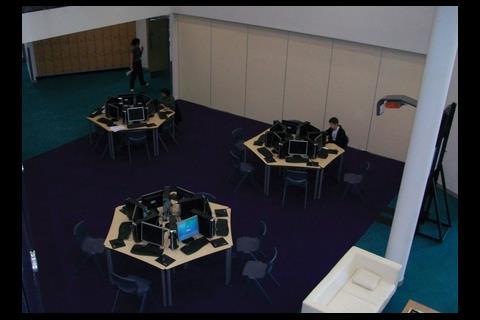 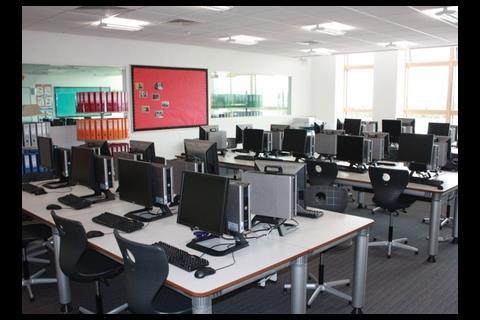 Today’s BSF schools require a mix of dedicated ICT suites and informal break-out spaces. The growing role of ICT equipment means higher cooling and power loads and the need for a full data network, all of which needs to be considered at the early stages of design 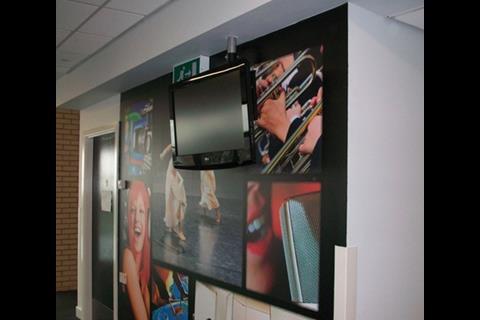 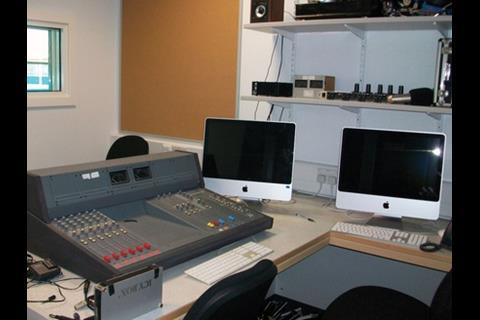 ICT is at the heart of all schools built under the BSF programme, but so far architects and designers have yet to switch on to the bigger picture. Stephen Kennett looks at what it takes

When did you last set foot inside a classroom? If it hasn’t been for the best part of 20 years, you could be in for a shock. Long gone are the days of blackboards and chalk, or the entire class huddling around the school’s solitary BBC Mirco while the teacher fumbles their way through the instruction manual. Today, information and communication technology – or ICT – is at the heart of all schools built under the Building Schools for the Future (BSF) programme.

But the programme is not just about building a school and shoehorning in some computers and interactive whiteboards. “ICT is one of the main levers for changing education and learning,” says Steve Moss, strategic director of ICT at Partnerships for Schools.

It also goes beyond delivering the curriculum. Fully integrated systems are appearing in the first wave of BSF schools. These offer smart card technology that can take care of cashless catering and e-registration, as well as biometric access control, building management and automated back-of-school administration functions.

Integrating all this of equipment into the building has become one of the biggest challenges that architects and designers face. Even at the concept stage, ICT needs to be explored as it can change the way the building is designed. Moss says: “A fully integrated approach at concept, design and delivery stage is the only way to deliver a successful project.”

Unfortunately for designers, there’s no magic blueprint or checklist to follow. The scope of the ICT is set by the local authority’s output specification. It’s then down to consortium bidding for the project to come up with a solution that meets the technical specifications set out by the British Educational Communications and Technology Agency (BECTA).

The upshot is that the requirements vary between local authorities and from school to school. “We’ve had experiments with personalised learning, but the evidence is only now building up and we know what makes a difference,” says Mike Jackman, an independent consultant.

So what are the bare basics? At the very least it means a full data networking installation, with wired connections throughout the school and wireless access in designated areas. The wired network needs to support the curriculum and the school’s administration, and provide voice over IP networks.

For architects this means providing space for server rooms – typically a 25m2, closely controlled, air-conditioned space – and hub rooms, as well as sufficient power and data sockets and wireless access points. In a 1,200 pupil secondary school, this can run into the hundreds, all of which needs to be planned at the start.

The ratio of pupils to computers varies, but Moss says it is not unusual for local authorities to work towards a ratio of 1:2. This won’t be met through dedicated ICT suites alone; instead, most schools are going for a mix to provide flexibility, which means a handful of dedicated ICT suites, classrooms and laboratories with fixed desktop computers and more traditional classrooms and breakout spaces with wireless connection where laptops can be used.

All of this means big power and heat loads. One way to reduce this is to adopt a thin-client solution. This uses stripped-down desktop units that are served with data from a remote, off-site server. It’s an approach used by contractor Mouchel. Paul Wilson is the head of ICT-education at the company. He says: “There are significant improvements in the architecture; it allows the M&E contractor to reduce the power across the school and also the cooling requirements.” Other benefits include increased flexibility in the classrooms and fewer and smaller server rooms.

Using this approach, Mouchel has been able to design schools that need only one server room. Careful arrangement of the spaces also enabled it to eradicate the hub rooms, which are needed at prescribed intervals along the data cable network. These typically house a cabinet with a 4m2 footprint. “By eradicating the hub rooms, it gave us a lot more space for other things,” says Wilson. “But you can only do this if you get the ICT people on board at the early stage.”

The BSF programme does encourage this approach, adds Wilson. “A single schools solution may need to be self-contained on site, but larger BSF schemes allow you to look at an area-wide solution. It’s one of the evolutions to come out of the city academies programme.”

Schools are also starting to see the benefit of portable technology, says Moss, meaning fewer dedicated ICT suites. “If you use laptops, anywhere can be an ICT space.”

At the moment, the battery life of portable devices is not good enough for them to be used throughout the school day without recharging. Some schools play it safe and install power sockets; others provide laptop trolleys where batteries can be recharged at lunchtime, or universal battery packs that connect to the computer’s mains adapter.

Cooling is an obvious issue. “We have to provide information on power loads and heat outputs early as there is a big desire to avoid mechanical ventilation,” says Dave Hornsey of ICT provider RM. “There will be cases where there is no alternative, but we try to keep that to a minimum, and where it is needed we try to cluster the rooms to keep the cost and provision down.”

One solution RM is pushing is low-powered desktop systems that use just 60W – a quarter of a typical unit. “It’s very attractive to architects because of the reduced cooling requirements,” says Hornsey.

Wireless access points also need careful planning, warns Wilson. The building’s steel structure can affect signals, and so can human bodies. “Wireless points are usually fixed later, but there needs to be some flexibility to get the optimum position, and putting them in place later can spoil the architecture.”

According to Jackman, many schools take a blanket approach to wireless provision to promote flexibility. It enables a space to be a classroom in the morning and a breakout space in the afternoon. However, he says it is not a replacement for a data outlet on a wired network. “With more and more video being used, wireless networks tend to run out of bandwidth. You still need the wired network.”

The surge in the use of audiovisual equipment also cannot be overlooked. Interactive whiteboards, electronic voting systems and electronic displays all need power and data sockets. “Increasingly, schools are asking for plasma displays in classrooms and corridors. The screen may well be provided by the ICT supplier, but if the M&E contractor doesn’t know they have to provide power, then that is a problem,” says Moss.

As mentioned above, the same network that supports the schools education systems can host the building management system, access control, security systems, cashless catering and administration. This obviously provides better value; the stumbling block, says Jackman, is that designers and the industry at large haven’t yet switched on to the bigger picture of ICT.

It’s only this summer, he says, that it has been possible to buy a console that allows a teacher to go into a classroom and control all the technologies in the room, such as lighting, heating, audiovisual and window blinds, from one panel. “Now is the time for someone to pull together all the practical elements for an ICT blueprint.”