Battle lines: The Ministry of Defence is a somewhat surprising waste management champion... 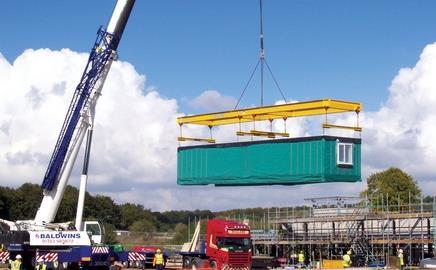 Defence Estates, the MoD’s property arm, is so far ahead of the waste management game that its main concern in meeting government targets to halve site waste is knowing where more can be cut, by Penny Barratt

Flak jackets or sustainable building methods – where should hard-pressed MoD budgets be directed? With urgent spending pressures to support troops in Afghanistan and Iraq, diverting money to longer-term issues such as sustainable development may not be a vote-winner.

On the face of it, saving money by cutting waste is a no-brainer – hence the government’s targets for its departments to halve construction waste to landfill by 2012. But it won’t be easy for managers at MoD property arm Defence Estates: they’ve already achieved such good results they’re not sure how to go further.

New reporting methods and data from a recently introduced set of 11 key performance indicators (KPIs) show that most Defence Estates projects are easily beating the pan-industry average recycling rates of 60%-70%.

At Catterick Garrison in North Yorkshire, where work is taking place on the £1bn Project Slam – the MoD’s 10-year Single Living Accommodation Modernisation programme – 81% of site waste is being recycled. This is good but not an exception. “Most projects hit 70%-80%. It’s going to be hard to demonstrate further progress as a lot of initiatives are already in place,” says Keith Maddison, head of sustainable development at Defence Estates. “Suppliers now see waste as a resource. You would expect resistance, especially with seven or eight different contractors, but I have been surprised by the engagement of suppliers to take this on board.”

For example, Maddison reports that at RAF Waddington in Lincolnshire – which in 2011 will become home to the Red Arrows – £600,000 has been saved by diverting waste from landfill during work to resurface taxiways. “With current costs of active waste at £32 per tonne and increasing by £8 a year, it’s possible to make considerable savings,” he says.

Defence Estates is urging its suppliers to become signatories to the voluntary agreement for halving waste to landfill. Seaton Price, sustainability manager at one of Defence Estates’ regional prime contractors, Carillion Enterprise, says the proposal is sitting at director level while the company works out what it would cost. He says: “We’ve no idea at the moment. We’re running at 15%-20% to landfill but there are only so many materials you can reuse or recycle.

“Also, certain activities are more difficult than others to show improvement: FM-driven contracts are different from construction-driven ones in terms of waste management. However, we recognise it’s a good idea and, even though it isn’t in our current contracts, it will be enshrined in the next round so we have to get to grips with it.”

Bovis Lend Lease, which was awarded the second phase of Project Slam last year, has its own target of 70% reduction of waste to landfill by 2010, based on a 2007 baseline. It is using Minimise, a bespoke online waste management tool, to enable compliance beyond site waste management plan requirements – with timber, packaging and metal coming top of the list for areas to improve.

On Project Slam, where the 10,000th bed space has just been delivered at Lympstone, modular building systems have allowed waste recycling rates up to 10% higher than for steel frame projects. According to Gareth Brown, Bovis Lend Lease environment and sustainability manager, the volume of waste generated per £100,000 spend is 30%-40% less than that for steel during on-site construction.

“There is a fixed, continuous supply chain; you deal with the same people and can make step changes to deliver efficiency and savings. It’s got an advantage over one-off projects,” he says. “The next challenge is refining the reporting systems that currently only produce data from site waste – not that produced in the factory.”

Bovis Lend Lease, CarillionEnterprise and Amec Turner are individually committed to sustainability, but the MoD last year decided that, as steward of the estate, it should itself follow and monitor the chain of waste. WRAP, which had already carried out detailed work for Defence Estates on monitoring the use of recycled materials across the SLAM programme, was asked to help establish data and standardise reporting.

Since the beginning of this year, prime contractors for the five regions (South-East, South-West, Scotland, East and Central) have been feeding in data that will be used to produce a baseline from March 2009 against which projects and suppliers can be monitored. Additional data is being collected from four further sources: Aspire’s Project Allenby/ Connaught, Landmarc (overseeing the defence training estate), HPC (the housing prime contract) and Project Aquatrine (the maintenance and operation of the MoD’s water assets).

In association with the suppliers, 11 KPIs were developed to monitor the prime contractors’ sustainability performance. These range from the MoD’s DREAM (defence-related environmental assessment methodology) sustainable building standards to timber procurement and carbon emissions. Waste management is number five on the list and is assessed according to two criteria developed with WRAP – tonnes disposed to landfill per £100,000 of core works spend and tonnes recycled per £100,000 of core work spend.

Maddison says: “Monitoring waste by tonnage alone is meaningless as the volume of work can vary year to year, so reporting by spend gives a good indication. All the contracts are slightly different, with different specifications – some written five years ago, before waste management was an issue. But all have signed up to the 11 KPIs.

There has been high-level support from the [Defence Estates] sustainable development steering group, which helps to deliver at operational level. The key thing is that people are thinking differently and using waste differently.”

Seaton Price was on the KPI working party. “There were two objectives for the KPIs: give Defence Estates more data when reporting to the MoD and enable them to benchmark suppliers. We’ve reported formally once and still trying to put the systems in place to get the data.”

Every quarter, Defence Estates’ supplier association steering group gets a report called a Dashboard – a spreadsheet giving an update on the suppliers’ quarterly achievements against nine criteria including waste to landfill. A simple, traffic-light system also shows how advanced each of the participating bodies is in terms of data collection and progress tracking. The first quarter of this year produced pilot results showing that 586.72 tonnes per £100,000 of core works was recycled across all supplier associations, with 391.25 tonnes going to landfill.

But Defence Estates does not take the findings on trust. Each year, 20 projects are picked from all regional prime contracts for “assurance reviews”, to ensure sustainable policies are in place and the figures are accurate.

Maddison says any discrepancies found during this process tend to be “an issue of communication rather than delivery”. He continues: “In other words, making sure the specification that’s in at the start regarding sustainability goes through to the end.” With contracts of between five and seven years, aimed at delivering a range of projects according to military rather than building need, this can be hard to pin down.

“We have to do more work at the centre,” admits Maddison. “We have lots of policies and targets but we need to think more about the design and costing element to support sustainable development. How will we do that? It’s a good question.”

In the meantime, the MoD is trying to establish a system of best practice across all its supplier associations. Each supplier fills in a matrix once a month on initiatives that have worked well. These are assessed by a working group and the best are made available online or as case studies.

But why stop at one department? What about joined-up sustainability thinking across the whole of government? “We already have working groups with other departments such as health and NOMS [the National Offender Management System],” says Maddison. “There is no reason why, if several departments have building projects running simultaneously in an area, we couldn’t have a joined-up programme for waste disposal. But then you start talking about centralised procurement, which admittedly would present some problems.”

Famously the largest estates PFI ever let by the Ministry of Defence is Project Allenby/ Connaught. Aspire Defence, a joint venture between Carillion and KBR, is running the 35-year, £8bn project to redevelop army barracks in Aldershot and around Salisbury Plain for 18,000 personnel. By the end of September, 2,500 soldiers had moved into new en-suite rooms.

The 10-year building programme involves the demolition of more than 400 buildings and the construction or refurbishment of 500 others. Sustainability and waste management arrangements have been at the core of the process, with guidance being given to subcontractors to ensure that their method statements meet the standards.

At the heart of this approach is minimising the volume of material brought on site requiring disposal. This has been achieved through a variety of means: suppliers undertaking to remove and recycle the packaging of their own materials; specifying materials in such a way as to minimise wasted offcuts; and modular construction for all new living accommodation buildings.

In addition, more than 99% of demolition waste is being crushed on site and reused as a fill material. Bricks, tiles and architectural ironwork have been retained on buildings of historic importance, while steel and timber have been resold where financially viable.

Waste management areas are provided to allow segregation before transport to skips in the specially built waste transfer station.

On-site skips are provided for recyclables (including wood, metal and packaging plasterboard), inert waste (such as bricks and concrete) and mixed waste. Hazardous materials such as mastic tubes are taken back by contractors.

Contractors have financial and contractual incentives to ensure that as much material as possible is recovered from recycling and that vehicle movements are minimised.

Waste generation and recycling data are reported on a monthly basis, turned into a key performer indicator for environmental performance, and conveyed to senior management.

Ministry of Defence: in figures

The MoD’s geographical footprint is huge. It covers 240 000ha, 80ha of which is built-on land, comprising 45,000 buildings across 4,000 sites, with some 50,000 service family homes. It employs 280,000 service and civilian personnel and is responsible for half of government-owned historic buildings – 782 listed buildings and 1,056 scheduled monuments. A key aim for Defence Estates is to rationalise its estate into fewer, but larger sites in the UK and overseas, the better to deliver military capability.

Despite its size, with 80% of the government’s estate, the Ministry of Defence performs creditably against other departments when it comes to sustainability. The Sustainable Development Commission ranks it a respectable seventh out of 21 departments, with 73.2% of target points achieved – compared with 97.3% for top performer the Department of Health and just 17.6% for the Department of Constitutional Affairs at the bottom
of the table.