3
It’s what’s on the outside that counts
News

It’s what’s on the outside that counts 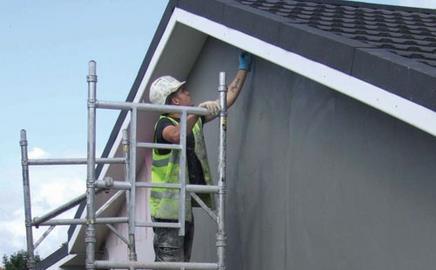 External insulation may not be pretty but it’s easier to install and less intrusive than internal solutions. Now a nationwide trial aims to find out just how effective it can be

The Energy Saving Trust is about to begin a major field trial to establish the effectiveness of solid wall insulation. The study of 200 homes across the UK aims to measure the in-situ performance of a variety of solid wall insulation systems and put some figures to the reductions in energy consumption and carbon emissions on offer.

So why the focus on solid wall insulation? Both main political parties announced details at the end of last year on how they aim to reduce carbon emissions from existing homes. A key plank in this plan is making homes more energy efficient, and a quick win is improving insulation levels. However, it’s recognised that the potential for filling cavity walls is falling, so attention is turning to what to do with the millions of solid wall constructed properties.

According to the English House Condition Survey report published last September, about 6.7 million dwellings in England were built using solid wall construction, a large number before the thirties. With about a third of the heat in a home being lost through uninsulated walls, anything to improve these buildings’ thermal performance can have a significant effect.

Solid wall insulation takes two forms – internal and external. Both have their merits but it’s external insulation that has seen a big uptake by local authorities and housing associations, particularly in the past decade due to the Decent Homes standard. Unlike internal insulation, it doesn’t take up valuable internal space and it can be installed without decanting occupants. The downside is the appearance. While it can blend in well on some types of properties, particularly those on a large scale, it’s more difficult on period buildings.

So, in parallel with the field trial, the Energy Saving Trust is launching a study to work out architectural details that can be used to make the installation of external insulation as seamless as possible. “There is a lot of solid wall insulation happening out there but it tends to be large housing associations doing a whole estate. That market is working well. But there’s a gap in the market for doing one-off owner-occupier houses,” says Steve Harris, head of low-carbon technologies at the Energy Saving Trust. “We’re looking at producing details – a sort of pattern book – that builders can work with and use.”

The aim is that this will cover a wide spread of property types and the most common solid wall housing types. It should be completed by the end of the year. Until then, above are some of the main problem areas and how to get around them.

What is external insulation?

External insulation involves adding a decorative weatherproof insulating treatment to the outside of the wall. The thickness of the insulation tends to be between 50mm and 100mm and typical materials include mineral fibre or expanded or extruded polystyrene and phenolic and polyisocyanurate rigid boards which are mechanically fixed or bonded with adhesive to the wall in 1,200mm x 600mm sheets and then given a protective finish such as polymer modified renders, pebble dash or brick slips. There are now some insulating renders that can be applied directly to the external wall.

U-values can be improved significantly. For example, applying 70mm of PIR external insulation can typically bring the U-value of a 225mm thick solid brick wall down from just over 2W/m2K to around 0.33W/m2K; 60mm of phenolic insulation can bring it down below 0.3W/m2K.

External wall insulation is more expensive than cavity wall insulation but it could save about £400 a year on the energy bills of a three-bedroom semi-detached house, as well as about 2.1 tonnes of carbon dioxide a year.

Where there is a sufficient roof overhang, the insulation can be seamlessly run right up to the eaves. However, on gable ends and where the roof doesn’t extend far enough, some way needs to be found to create a visually neat junction. One way is to use a verge detail, which sits on top of the insulation and protects it, but this can be unsightly.

The other solution is to extend the roof. This involves stripping back an area of roof, fixing new battens, extending it by a tile and a half, and forming a new soffit. This is more costly, but gives a much neater solution.

Depending on the floor construction, the insulation can be carried right down to the ground to prevent a cold bridge being formed. In Europe it is common to excavate around the house and take the insulation – normally extruded polystyrene for this section – down into the ground.

Soil stacks, rainwater pipes, satellite dishes and gas meters all create complications. It is rare to find sufficient clearance between external soil stacks and existing walls to insert the insulation and apply the finish. The easiest way around this, says Paul Kirby of Wetherby Building Solutions, who has more than 20 years’ experience insulating domestic properties, is to use a swan neck joint to bring the pipe away from the wall. Most clients will replace the rainwater pipes and guttering at the same time and reposition them to account for the insulation.

Consideration also needs to be given for fixing things such as satellite dishes, gate posts and canopy porches. A common problem is for fixings to be drilled into the original substrate and then be over-tightened, cracking the render and deforming the insulation. The way around this is to mount timber to the wall, insulate around it and render over it, which will leave a secure fixing point.

(See pipes and services section below)

There are two key issues with windows. The first is insufficient overhang of the existing sill so it doesn’t clear the insulation when it’s fixed to the wall. To get around this the sill needs to be extended. Preformed aluminium extensions which fit beneath the existing sill are one option, or a neater solution is a uPVC oversill which is bonded to the top of the existing sill. Kirby says over half of the schemes his company works on involve upgrading the windows at the same time, so this is often not an issue.

Another problem is what to do at the window reveal. Usually there isn’t enough room to fix 50-60mm of insulation without it snagging outward-opening windows or overlapping the frame too far. This means either reducing the thickness or not installing any insulation. “Sometimes there is little you can do about this,” says Kirby, “and you have to accept that you’ll have a cold bridge there.”