Off-site manufacture: Beam me up, Scotty 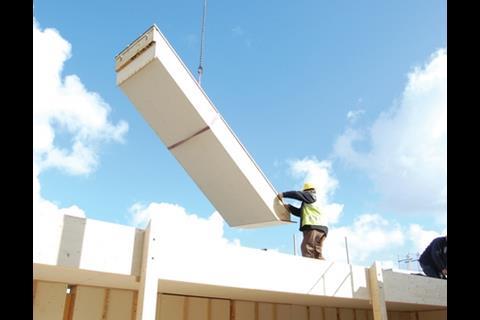 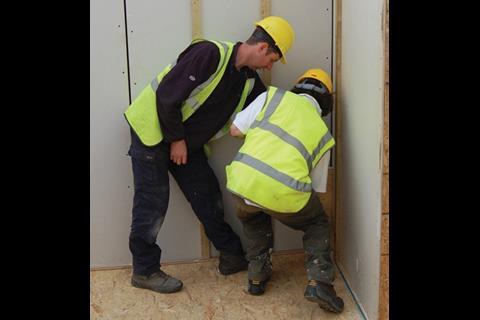 Martin Penk wasn’t planning on erecting his new straw bale school building in three days, but after a consignment of beams was mislaid in a Swedish factory he had little choice.

The glulam timber beams finally arrived at Bosvigo school in Truro, Cornwall, just before children returned from the Easter break. This meant the project team had only 72 hours to erect the structure and make it weatherproof.

The idea is not as crazy as it sounds. Penk and his architectural practice Arco2 have developed an off-site manufacturing system that drastically reduces the time taken to erect straw-bale buildings. The process involves slotting standard 500mm-wide straw bales into a chunky-structured timber frame. So while the glulam beams were held up in Scandinavia, Penk and his team got on with the fabrication of the straw bale structured insulated panels [SIPs] in a factory. When the beams eventually arrived, the team was able to assemble the SIPs in time for the next term.

Penk first considered using straw bales on a school in Padstow. He was keen to source local materials and saw straw as an alternative to recycled newspaper, a commonly used cavity insulation that lets moisture escape through walls. Penk says: “We’d been using the principle of a breathable wall. It seemed to me the hygroscopic properties of something like Warmcel were close to straw bales.”

Penk’s big concern was the time it took straw bale walls to settle after being placed on the slab. As the school building was an extension to an existing building, Penk needed to know exactly how much the bales would settle to avoid cracks appearing where the structures joined. However, settling is not an issue if the timber panel is bearing the loads. “Timber has far less differential increment than loadbearing straw bales,” says Penk. “Even after you’ve strapped straw bales down and compressed them, the weight of the roof will compress them further.”

Using an SIP system also allowed Penk to fix rainscreen cladding directly to the structure. “We weren’t relying on straw for structure any more so we could hang the cladding off the structural timber,” he says.

Penk was keen to control the build process in a factory, preferring contractors not to learn the system on site partly because straw bales come in sizes that don’t fit standard timber industry modules. Arco2 worked with the Dorset Centre for Rural Skills to set up a firm called Ecofab, that both prefabricates the panels and erects them on site.

One of the issues with the system is its procurement. With Arco2 both designing and manufacturing the system, there is a conflict of interest. “When I was talking to the council, they said we have to see some competitive tendering, which is difficult,” Penk says. “Do you go to the market and ask for a prefabricated straw bale system?” It was agreed that there would be a dedicated subcontractor who would supply and direct the package – Ecofab. Then the competitive element – the foundations and fit-out – would be put out to a number of contractors who would do the support work.

Another tough challenge was convincing councils the system would work. “I had ridiculous conversations about whether the buildings would collapse. We don’t go to local authority building inspectors any more. We use a specialist approved inspector who understands what we’re doing.”

In the beginning, finding evidence to support the credibility of the system was difficult and Penk had to source a lot of data from Mexico, where similar methods of construction are used. Arco2 is now aided by Buildcheck software, which helps ensure the design complies with Building Regulations.

Arco2 now has a number of projects in progress, and it is shortly to start on site on its most ambitious projects yet: two Dorset affordable housing schemes in Worth Matravers and Buckland Newton, developed by Community Land Trusts, which enable local people to buy land for affordable housing and choose who lives in their community. It means Penk can obtain funding without waiting for housing association grants. With the school nearing completion and another private two-storey house in west Cornwall not far off finishing, Arco2 is ready to introduce its ingenious straw bale system to a wider audience.